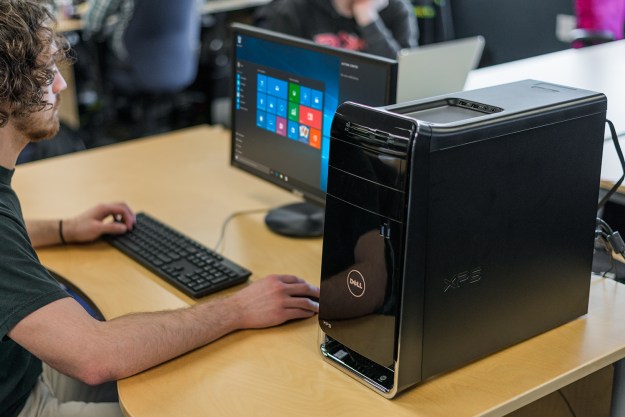 “The XPS 8900 does what it needs to do at a lower price than the competition. For many, that’ll be all that matters.”

We review a lot of gaming desktops at Digital Trends, at many different price points, but they all share one trait. They look the part. Hardcore gamers love that, but it can be intimidating and off-putting to others. Not everyone wants a PC that looks like a rejected sci-fi movie prop sitting in the living room.

Enter Dell’s XPS 8900 Special Edition. Nothing about this system, or its marketing, screams “gaming” at a glance. It’s sold through the same web portal as every other Dell, and its description doesn’t even reference gaming directly. Yet Dell says the system is equipped not only for the latest 3D titles, but can even handle the Oculus Rift.

Despite that, the XPS is sold at mass-market pricing. Our review unit rung up at $1,200, and the MSRP can be knocked down to $1,000 with a special Rift bundle that’s valid until June. That sounds like a steal. Does the XPS 8900 get away with it, or is its supposed value a trap that snags unsuspecting gamers?

The Dell XPS 8900 is the most powerful desktop the company makes, excluding its Alienware brand, but you wouldn’t know from looking at it. Its simple enclosure features a glossy black front with chrome accents. Otherwise, it’s rudimentary – too rudimentary. Dell has taken subtle design to an extreme. This rig may have “Special Edition” in its name, but there’s nothing special about how it looks.

That does have its advantages. Size is one. The XPS 8900 is small, measuring just 16 inches tall by 17.5 inches deep, and 7 inches wide. Finding a place to put this desktop shouldn’t be a problem, as it’s half the size of some bigger, beefier, yet similarly equipped competitors, including Acer’s Predator G-Series.

Dell has crammed solid functionality into the compact exterior. On the front there’s two USB 2.0 ports and two USB 3.0 ports. Notably, the USB ports are charging ports, so they’ll provide power when the system is turned off. That’s meant to make cellphone charging easier, and the system even has a handy tray on its top to hold your mobile while it’s juicing up. There’s four more USB 3.0 ports around back, along with two USB 2.0. A good selection, given the XPS 8900’s compact size.

Opening up the XPS 8900, a process that requires removing just one thumbscrew, reveals an interior that mirrors the exterior. It’s small and conventional, with limited room for expansion. There appears to be room for only one additional hard drive, as well as an additional 5.25-inch drive. There’s no room, or motherboard support, for an additional video card.

Component quality is questionable. The motherboard is a Dell-branded unit, as is the power supply. That latter part could be a long-term problem. It’s rated at just 460 watts and has few spare power connectors, so any serious system upgrade will likely require a replacement of the power supply. That increases the complexity of the upgrade, and will tack a few extra bucks to the price of the improvement.

At least the Dell doesn’t make any disastrous mistakes. Opening the case couldn’t be simpler, and the layout is conventional, so components are easy to find. There’s no weird supports, ducts, or other non-standard components, aside from a small plastic support that appears designed to protect the video card in shipping.

The XPS 8900 is one of the least expensive Rift-ready PCs available.

A Core i5-6400 powers the Dell XPS 8900 we reviewed, though the system can be equipped with the full range of Intel Z170 compatible chips up to the Core i7-6700. It’s paired with eight gigabytes of DDR4 2,133MHz memory. These specifications are basic compared to a lot of gaming rigs, and the result is obvious in our benchmarks.

These numbers look worse than they are. The XPS 8900 comes in way behind other affordable gaming desktops we’ve recently reviewed, especially in 7-Zip, where the Core i5 chip’s lack of Hyper-Threading really holds it back.

Don’t take these results too seriously. The XPS 8900 never feels slow, at least not because of its processor. The Core i5-6400 is an excellent all-around chip that should remain adequate for half a decade or more. Games are rarely held back by processor performance, so the Core i5 isn’t a liability there.

Still, if you need excellent processor performance, you’d do well to select an upgrade. Look at Handbrake, for example. The Acer Predator G6 handled our test clip in 381 seconds, while the Dell XPS 8900 needed 641 seconds – an increase of almost 70 percent. Put another way, a video that takes half an hour to transcode on the Predator G6 would take 51 minutes on the XPS 8900. That’s a big difference.

There are several reasons why this Dell is affordable, but none contribute as much as the hard drive. Rather than go with a solid state drive, or a solid state drive combined with a hard disk, the XPS 8900 sticks with a 1TB disk drive from Seagate. That murders the system’s scores in our hard drive performance benchmarks.

Ouch. The Dell is trounced by the competition, which we tested with either a SATA solid state drive or, in the case of the Alienware, a PCIe SSD. The XPS 8900’s score in HD Tune is roughly a fifth that of the Alienware X51.

The Dell XPS 8900 sticks with a mechanical hard disk up to its $1,700 configuration, at which point it gains a 2TB hybrid disk drive with solid state cache.

If you want a true solid state drive you must buy the top-shelf model, which is $2,200. Dell does not let users substitute a SSD for the HDD, so if you want an SSD at all, you have to buy Dell’s most expensive configuration.

The XPS 8900’s scores have so far reflected its budget price. It’s behind in our processor benchmarks by a fair margin, and way behind in hard drive performance.

Now, though, we come to the contest that matters most. Gaming. Does the Dell redeem itself?

Fallout 4 runs on the XPS 8900 at an average of 85 frames per second, with detail at Ultra and resolution at 1080p. That’s ten frames behind the iBuyPower Revolt 2, but way ahead of the Alienware X51, which scored only 62 FPS.

That story repeats itself in every game, at both 1080p and 1440p resolution. The XPS 8900 is generally somewhere behind the iBuyPower Revolt 2, often by just a few frames. That makes sense given we reviewed the Revolt 2 with a Nvidia GTX 970, the same video card in the XPS 8900. The difference between the two is likely the result of the processor, as the Revolt 2 had a Core i7-6700K.

Moving beyond comparisons, the XPS 8900 proved itself capable of handling modern games at 1440p resolution. Every game except Crysis 3 averaged more than 60 frames per second at maximum detail, though Fallout 4 just barely met that standard. If you game at 1080p – like most people do – you’ll find the XPS 8900 can exceed 80 FPS in most titles.

Dell has taken a unique approach to the XPS 8900’s cooling design. There isn’t one. Instead, Dell stuck a single 80mm case fan on the back and called it a day. Aside from the CPU and GPU, which both have a stock cooler, that’s it.

And you know what? It works. The XPS 8900 is in no danger of overheating, and it emits no more than 40.5 decibels at load. That makes it quieter than every gaming desktop we’ve recently reviewed except for Origin’s Millennium, which put out just 39.6dB.

The XPS 8900 comes with Dell’s typical one year limited warranty. Though that’s the norm for standard consumer desktops, it’s not on par with many gaming rigs. Acer’s Predator G6 has a two-year warranty, plus access to an exclusive customer support line. Most custom PC boutiques, like Digital Storm and Origin, offer a one year parts warranty with lifetime free labor and lifetime customer support.

Let’s clear something up right away. The XPS 8900 is not a gamer’s dream machine. Its lack of upgradability is a problem that will cause hesitation among enthusiasts. Game performance is strong, but the Core i5-6400 in our test machine is no heart-stopper, and the use of a hard disk instead of a solid state drive is risky. It’s true the system meets the Oculus Rift’s requirements, but it doesn’t blow them away.

The argument for the XPS 8900 is grounded entirely in value. Fortunately for Dell, those roots run deep. $1,200 is not a lot to spend on a rig that can handle 1440p gaming without breaking a sweat, and if you buy the XPS 8900 with an Oculus Rift, the desktop is just $1,000.

Most competing systems miss the mark. HP’s Phoenix has a more powerful Core i7-6700 processor and similar AMD Radeon 390X graphics card, but it’s $100 more. Asus’ G11CD has a faster Core i7-6700 processor, but sticks with a GTX 970, and is priced at about $1,500. Smaller custom PC companies like Falcon Northwest, Digital Storm, and Origin often come in several hundred dollars more than the Dell. IBuyPower comes close, but only with its entry-level configurations, not the custom-case Revolt 2.

Dell’s XPS 8900 is a solid system if you don’t have a lot to spend, you want a PC that’s great with games, and you don’t want it to dominate your living room or office. It’s small, powerful, quiet, and affordable. This rig won’t make most gamers fall in love, but it does what it needs to do at a lower price than the competition. For some, that’ll be all that matters.