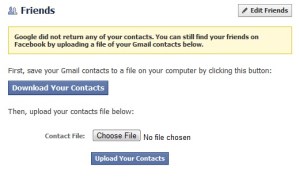 Google is all about transparency, unless Facebook is involved. Google recently decided to cut off Facebook’s access to its Gmail clients, citing the social networking site’s refusal to share its own information. Previous to this ban, Facebook users were able to instantly add Gmail contacts on Facebook to their Friends, a service no longer provided.

Add to this a recent partnership allowing rival search engine Bing to include Facebook profiles in its search results, and you can imagine there’s some tension between Google and Facebook.

But if Facebook is anything, it’s resourceful. Today the site rolled out a link under the “Find Friends” tab, allowing users to directly download their Gmail contacts. Under the tab, there’s an option labeled “Other Tools” where you can choose the “Other Email Service.”  Go ahead and enter your Gmail address, only to be told there are no results – but you’ll also see a link that lets you download your Gmail contacts as a CSV file. This is what you can then upload to Facebook with one click – and voila, all your Gmail contacts on Facebook are available.

It looks like the workaround is staying put. “We’re disappointed that Facebook didn’t invest their time in making it possible for their users to get their contacts out of Facebook. As passionate believers that people should be able to control the data they create, we will continue to allow our users to export their Google contacts,” a spokeswoman for the company commented.

Facebook declined to make an official comment, but platform engineer Mike Vernal from the company wrote on TechCrunch today, criticizing Google for saying one thing and doing another. He accuses the company of “being open when its [sic] convenient,” and saying “E-mail is different from social networking because in an e-mail application, each person maintains and owns their own address book, whereas in a social network your friends maintain their information and you just maintain a list of friends. Because of this, we think it makes sense for e-mail applications to export e-mail addresses and for social networks to export friend lists.”

Vernal closes by saying, “We strongly hope that Google turns back on their API and doesn’t come up with yet another excuse to prevent their users from leaving Google products to use ones they like better instead.”

While users will remain able to upload their Gmail contacts (an issue very little people actually seem concerned with), look out for what promises to continue to be an escalating rift between the two Internet giants. Get ready for a host of little more than snide press releases and catty insults.

Here’s how to delete your YouTube account in just a few easy steps
Twitter is building a menu option for Twitter Shops
How to use Google Spaces
Malwarebytes resolves error that was blocking Google this morning
The HP Pavilion laptop is only $500 with this limited-time deal
This 11-inch Chromebook from HP is only $98 at Walmart today
This HP Omen gaming PC with RTX 3070 is $500 cheaper today
This dangerous vulnerability tricks researchers by mimicking old threats
GPU prices and availability (October 2022): How much are GPUs today?
Best Microsoft Surface Laptop deals: Prices from $490
The best external hard drives for 2022
The best Chromebooks for 2022: great choices at every price point
It turns out AMD isn’t cutting GPU prices after all