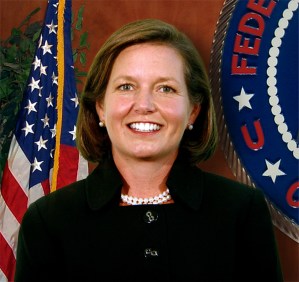 A Commissioner of the Federal Communications Commission who voted to approve the controversial merger of telecommunications giant Comcast and NBC Universal is now taking a job with Comcast as a Washington lobbyist.

Meredith Attwell Baker, a Republican FCC Commissioner who formerly worked in the Commerce Department for President George W. Bush, was one of four FCC Commissioners who voted in January to approve Comcast’s $13.75 billion deal to purchase controlling stakes of NBC Universal and General Electric Co.

News of Ms. Baker’s move to Comcast was first reported late Wednesday by a number of outlets, including the Wall Street Journal, The Hill, Politico and The New York Times, all of which cited an unnamed person “familiar with the matter” as the source of the information. Since the publication of those reports, both Ms. Baker and Comcast have issued official statements that confirm Ms. Baker’s employment with the company.

“Commissioner Baker is one of the nation’s leading authorities on communications policy and we’re thrilled she’s agreed to head the government relations operations for NBCUniversal,” said Kyle McSlarrow, President of Comcast/NBC Universal for Washington DC. “Meredith’s executive branch and business experience along with her exceptional relationships in Washington bring Comcast and NBCUniversal the perfect combination of skills.”

Critics immediately jumped on Ms. Baker’s move from the FCC to Comcast as a gross conflict of interest, and evidence of the corruption between the US government and big business.

“No wonder the public is so nauseated by business as usual in Washington—where the complete capture of government by industry barely raises any eyebrows,” said Craig Aaron of Free Press. “The continuously revolving door at the FCC continues to erode any prospects for good public policy. We hope—but won’t hold our breath—that her replacement will be someone who is not just greasing the way for their next industry job.”

FCC commissioner wants an investigation into Wi-Fi at presidential debate