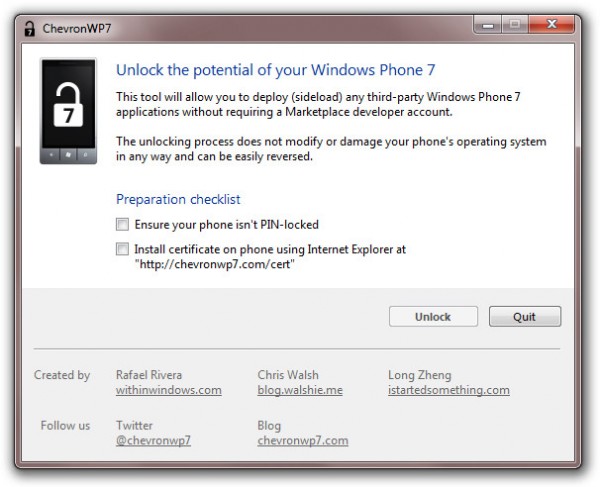 Windows Phone 7 is due for its first update, and in addition to a copy-and-paste function and improved app and game startup speeds, Windows will be officially blocking ChevronWP7. The jailbreak tool allowed users to unlock their phones and access non-marketplace apps, and while it was pulled awhile ago, those who downloaded it prior to its exit have been able to utilize the tool.

The three ChevronWP7 developers, Long Zheng, Rafael Rivera, and Chris Walsh wrote in a blog post yesterday that Microsoft told them the “coding error” in their app would be plugged by the coming update. Shortly after distributing the unlocking tool, the developers were approached by Microsoft to collaborate on homebrew applications, and in exchange were encouraged to kill ChevronWP7. But now anyone lucky enough to snag the app before its elimination will see it forced out by the OS update.

The trio will meet with Microsoft smartphone staff in Redmond soon to talk about renewing focus on “the homebrew potentials of Windows Phone 7 and some of the wide community feedback around the platform.” Microsoft declined to take the typical legal threat route, and instead did away with the jailbreak while pocketing three talented developers. Not a bad move.