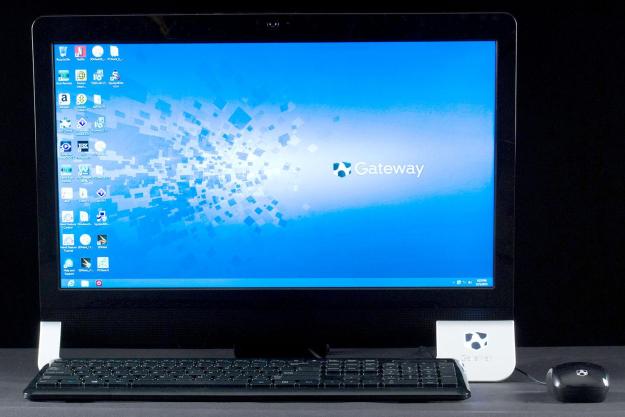 “Simple and easy-to-use, the Gateway ZX4970 provides adequate performance at a reasonable price.”

All-in-ones are often premium systems designed for style as much as functionality. When aesthetics and features blend perfectly, as with the Apple iMac and Dell XPS One 27, the result is brilliant, but also extremely expensive. Not everyone has over a grand to spend on a desktop computer.

There is, however, another kind of all-in-one, a computer that consists not of style statements but the soul of an honest, bare-bones PC built for consumers on a budget. Simple, yet functional, these PCs are meant to offer a simple setup at a very low price. Acer is a dominant player in this category, as is its sister company, Gateway.

One of the newest options from Gateway is the ZX4970-UR22, and at first glance it doesn’t impress. Equipped with a Pentium-branded processor, four gigabytes of RAM and a mere 21.5” display, it’s hardly at the cutting edge of consumer computing. But the humble ZX4970 also sells for just $449, which means its priced very attractively.

There’s nothing wrong with basic

The affordable focus of this all-in-one is obvious from the moment it’s unwrapped. Plastic is the material of choice, and there’s little attempt made to class up the look with trim pieces or unique features. The ZX4970-UR22 is propped up by a simple photo-frame stand, and while there’s some tilt adjustment available, there’s no way to change height or orientation.

The Gateway ZX4970 is a top choice for desktop shoppers on a tight budget.

This doesn’t mean the system looks excessively cheap, however, or that it feels flimsy. Indeed, the ZX’s bulky appearance, while not attractive, lends it an aura of durability and purpose. While the plastics are basic, panel gaps are small, and the stand holds the system firmly in the place. The only bit of flair is a light-up Gateway logo in the lower right hand corner, a feature that looks good in a bright room but can be annoying after the sun goes down. Fortunately, it can be turned off.

A look at the Gateway’s left flank reveals two USB 3.0 ports, a card reader and individual headphone and microphone jacks. The back panel expands connectivity further with four USB 2.0 ports, HDMI-in and Ethernet. 802.11n WiFi is standard and even a DVD-drive is included on the right side. The array of ports and connectivity options provides more choice than some all-in-ones that sell for twice the price, and is impressive for a budget desktop.

A budget computer without a budget display

While the Gateway’s 1080p display lacks touch, it excels in most other respects. Our tests showed that it’s capable of rendering 97% of the sRGB gamut, and maximum contrast was pegged at 680:1. These results are on par with or better than more expensive competitors like the Dell Inspiron One 23 and the Acer Aspire Z3.

Subjectively, these figures translate to image quality that would be good at any price. Games and movies are rendered with excellent sharpness and reasonably accurate color, while decent black levels provide a sense of depth without crushing detail. Color temperature is too cool, giving whites a blue-ish cast, but this is hard to notice without a direct comparison to another, superior display.

Such strong performance is fortunate because there’s little you can do to improve out-of-the-box quality. Not even brightness or contrast can be changed. The default settings are sufficient for most environments, but the brightness output of 170 lux is a bit too high for comfortable use in a dark room.

The built-in speakers unfortunately don’t live up to the display’s high standard. Though loud enough to fill a small room, they lack bass, which leads to a tinny, artificial quality. Distortion can be heard when deep sounds (like an explosion) play alongside dialogue or music. External speakers are recommended for a pleasing entertainment experience.

The Gateway ZX4970’s low price is made possible partly by the use of an Intel Pentium G2030 processor. Though recently launched, this dual-core chip uses the older Ivy Bridge architecture and doesn’t offer common Intel features like Hyper-Threading or Turbo Boost.

What it does provide is a clock speed of 3 GHz, which produced decent results in our performance tests. We recorded a SiSoft Sandra Processor Arithmetic score of 31.44 GOPs and a 7-Zip combined compression/decompression score of 6,263. These numbers are far from the best, but also far from the worst. Some more expensive competitors, such as the Acer AZ3 and Vizio CA24T, have scored lower.

The mechanical hard drive, as gauged by PCMark 8, generated a surprisingly decent result of 2,447. We weren’t expecting much given this Gateway’s price, but this figure is solidly average among systems lacking a solid state drive. As with the processor, the hard drive is quicker than the price suggests it might be.

There is a weakness, however; 3D performance. The Pentium G2030 processor uses Intel HD graphics (without any number behind the label), the slowest version of the company’s integrated graphics line. In turn, the system handed in a disappointing 3DMark Cloud Gate score of 2,146 and a very low score of 228 in the more demanding Fire Strike test. These numbers are the worst we’ve seen from a desktop in over a year, and there’s no discrete graphics option to make up for this flaw. Even relatively simple 3D games like League of Legends will struggle at 1080p.

The ZX-series comes with an island-style wired keyboard that provides little in the way of extras. Even media buttons are missing, though functions like play and pause can be pulled off using a hotkey combo. But features aside, the keyboard is attractive and pleasing to use.

We feel the same way about the included wired mouse. The size is right and while the construction feels a bit cheap, it’s hardly out of place given the system’s low price. Our only complaint is the use of an infrared sensor. Some competitors, like Lenovo, are using laser technology, which provides greater precision and banishes the red glow that come with all infrared mice.

Lots of icons, one real annoyance

Booting up the ZX-series for the first time brings you to a plethora of pre-installed apps and icons which compete for space on both the desktop and the Windows 8 start screen. The reduction in bloatware by many manufacturers makes this particularly noticeable; Acer and Gateway don’t seem to be following that trend with their entry-level products.

Upon closer inspection, though, the damage isn’t as bad as it appears. Most of the icons are shortcuts to partner websites and can be deleted within seconds. The software that remains, such as Acer Remote and CyberLink PowerDVD, can prove useful. Only one true annoyance exists, and that’s Norton Internet Security which, as always, launches a barrage of pop-ups and warnings until it un-installed or purchased.

No crisis of cooling

Add one part bulky frame, one part entry-level processor, and stir thoroughly for five minutes. What do you get? The recipe for silence; and this Gateway follows it to the letter.

Okay, it’s not entirely silent. A fan does exist, and it does spin. But it does so lazily, generating so little drama that it’s difficult to hear above the sound of cars passing on a road outside or a space heater running two rooms away.

Though it doesn’t innovate or thrill, the Gateway ZX4970-UR22 is a solid, no-frills computer offered at a very reasonable price. The processor is reasonably quick, the display is good, and there are plenty of ports for connecting hard drives and other extras. Only 3D performance falls short, but competitors in the same price range are as bad or worse.

Speaking of competitors, there’s no shortage of them – yet most can’t match the Gateway’s price. The few all-in-ones that do limbo below $400 often resort to a slow netbook-grade processor like the AMD E-series or an outdated Intel Atom. The only alternative that runs neck-and-neck with the ZX is Lenovo’s C440, which sells for the same price with almost identical hardware. We haven’t reviewed that system, but from a distance, the C440 appears to give up some connectivity but gains a slimmer frame and a better bundled keyboard.

While no one will be impressed when they see a ZX-series on your desk, the system does everything you’d expect a budget-friendly AIO to do, and does so without any fuss. Overall, this Gateway is an excellent choice for anyone seeking a PC that’s as functional as it is affordable.

Best Chromebook deals: Get a new laptop from $99
This stunning DIY gaming PC dream machine is made of glass
The best laptops you can buy in 2022
Asus launches world’s lightest 14-inch laptop with monster battery life
The most innovative monitors of 2022
The most innovative tech products of 2022
Why I refuse to buy The Callisto Protocol on PC, even with an RTX 4090
Nvidia and AMD GPU prices could skyrocket again in 2023. Here’s why
How to safely overclock your Intel or AMD CPU
ChatGPT: how to use this viral, often hilarious AI chatbot
What does the lock mean on Snapchat?
I replaced my MacBook with a Quest Pro for a full work week. Here’s what happened
How to post a Short on YouTube