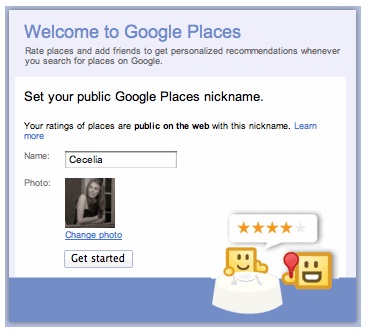 Location is taking over the digital scene, with companies like Foursquare, Gowalla, Yelp and Facebook Places (meets Deals, of course) ruling the territory. Wisely, Google is beefing up its Places application with a social side to compete.

A significant advantage that many of Hotpot’s competitors have, however, is their integration with Facebook. It’s no secret at this point that Facebook and Google are on less than good terms, which puts Hotpot in the tough position of having to rely on its own social graph. Many Google account holders don’t create profiles for the site, choosing instead to use Google for Gmail alone. The built in viewership that comes with Facebook integration is invaluable, and Hotpot simply won’t have access to it.

Still, Google’s working with what it’s got, and the “Add friends” tool is simple and non-committal enough that it should be effective. Users are shown their Gmail contacts list and invited to “Add” friends from it, which sends an e-mail inviting the selected person to see your ratings.

The user interface definitely leans toward a traditional social networking format, and includes the option of an alias, profile picture, and the friends list. Aside from that, there’s no personal information available – something Google may have learned from its Buzz debacle. The focus is on Places, your rankings, and the recommendations eventually generated for you. By offering a social service with functionality at its core, Google is making a smart, safe step into the arena.

If it can get users beyond that annoying first round of sending and receiving invites to use Places with Hotpot, it will be a worthwhile service. Google Maps is many consumers’ default for directions and business’ locations, and a more accurate ratings system – not to mention those ratings being authored by people you know and presumably trust – would be a benefit for anyone.

And even if it can’t get people to collectively jump on and invite entire contact lists, Hotpot is still useful for an individual. Based on the ratings you give, it will generate recommendations for you. Who needs friends when you’ve got Hotpot?

WASD and arrow keys swapped? Here’s how to fix it