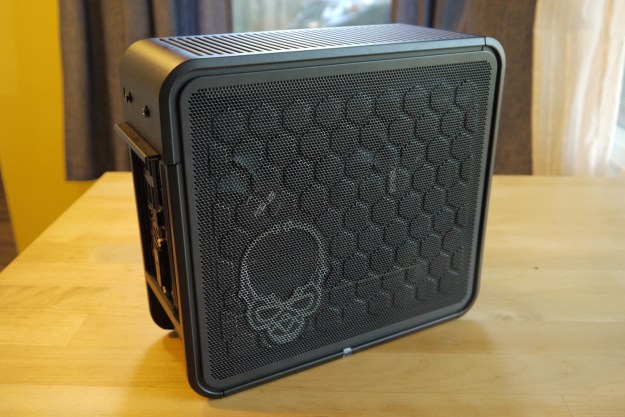 “Intel's NUC 9 Extreme Kit is a unique vision of computing, but far from perfect.”

I built a computer case out of plywood earlier this year. At about 9 inches tall and deep, and 5.5 inches wide, it’s an extremely small system. I spent a good thirty hours researching, designing, and tweaking the case, which now houses my main desktop PC. It was an enjoyable, worthwhile project.

But I could’ve just waited for Intel’s NUC 9 Extreme Kit.

These components put it well ahead of my personal desktop, which has a Ryzen 5 3500 processor and Nvidia’s GTX 1650 Super. Yet the Intel NUC 9 Extreme Kit ($1,700) is slightly smaller. It’s a few tenths of an inch less in depth and height, and narrower by nearly two inches.

Strangely, the Intel NUC 9 Extreme Kit basically looks like a NUC. I say that’s strange because, given the gap in performance, I expected a more drastic redesign. Yet it has the same square-ish, round-edged look of past NUC devices.

NUC fans might be surprised by its bulk, which is several times more than any previous device in the NUC line. Most people, though, will think the system diminutive. Its volume is about 5 liters. By comparison, Dell’s XPS Special Edition desktop — our top desktop for most people — takes up almost 25 liters.

That’s a big difference. Though larger than in the past, the NUC 9 is small enough to tuck away just about anywhere you’d desire. Put it on your desktop, on a shelf, or even in a cabinet (if you can provide adequate airflow). Importantly, it remains small enough to easily work as a home theater PC.

The NUC 9 has an industrial look that doesn’t communicate its unique approach. Aside from the skull logo used on other gaming-focused NUC devices, nothing about this PC suggests performance. Personally, I don’t mind. I’ll take functional over garish any day of the week.

The excellent selection of ports speaks to the NUC 9’s dual-purpose approach.

It’s an excellent selection of ports that speaks to the NUC 9’s dual-purpose approach. It can accommodate a graphics card for gaming, but it could also serve as a small workstation for a videographer, photographer, streamer, or another creator. It rounds out wired connectivity with Wi-Fi 6 and Bluetooth 5 support.

The NUC 9 Extreme Kit would be intriguing if it were “just” a powerful pint-sized PC, but there’s more to it than that. It includes Intel’s Compute Element which, if you boil it down, is a functional PC squeezed onto a PCI Express card smaller than most video cards. The Compute Element is home to the processor, memory, and hard drive — though the NUC 9 Extreme Kit only comes with the processor. You’ll have to purchase the memory and hard drive separately.

Intel’s pitch for the Compute Element focuses on upgradability and customization. In theory, this move gives NUC 9 owners an excellent upgrade path. The processor, RAM, hard drive, video card, and power supply can be replaced.

In fact, I might argue it is better than a normal desktop, because there’s no need to worry about replacing the motherboard. Swapping the Compute Element could also upgrade your port selection, Wi-Fi, Bluetooth.

That’s the pitch. Does it work in practice?

I was disappointed to discover the NUC 9’s modular design is finicky. Cracking the case open is easy enough. Just remove two screws and slide back the top. However, the customized Compute Element is decorated with numerous connectors at awkward angles. These must be delicately removed.

In my experience, gamers squeamish about upgrading a rig are fearful because they don’t want to break an expensive PC. The NUC 9 doesn’t solve that problem.

Once the connectors are removed, and a final screw loosened, the Compute Element slides free like any other PCI Express card. The Element is a plastic shroud on a PCB that contains the processor, memory (in the form of two SODIMMs), and solid-state storage.

While memory and storage can be replaced, the processor can’t be removed. It’s a mobile chip that’s permanently attached, just as in other NUC devices. That’s why the Compute Element is important. Without it, you have no way to replace the processor. With it, a processor upgrade is at least possible.

Personally, I’m inclined to believe Intel’s plan. The company has supported the NUC line for years, despite the fact it’s only a sliver of its overall business.

I expect processor options will be limited compared to a standard desktop, but trading some flexibility for simplicity and size might make sense. The subtle differences between processors aren’t relevant to most people, including most enthusiasts. If Intel (or partners) can simply offer one Core i5, i7, and i9 Compute Element for each future mobile processor generation, I think that’s adequate. And I have faith Intel will manage that.

As mentioned, the Intel NUC 9 Extreme Kit I received had an Intel Core i9-9980HK processor paired with 16GB of memory and an Nvidia RTX 2070 video card built by Asus. The Core i9-9980HK isn’t the most modern processor, as it was launched nearly a year ago. Still, it’s a top-tier option in Intel’s line-up of mobile chips, offering eight cores, 16 threads, and a maximum Turbo Boost frequency of 5GHz.

The i9-9980HK performed as I expected. In Geekbench 5, it delivered a single-core score of 1,232 and a multi-core score of 7,312. These figures are in the ballpark of Core i9-9980HK laptops we’ve tested. The Apple MacBook Pro 16 was slightly slower, and the Acer ConceptD 9 was slightly quicker. Remember that while the NUC 9 is a desktop, its processor is a mobile component.

While the i9-9980HK performs well in Geekbench 5, recent AMD components are squeezing it out. We recently reviewed the Asus Zephyrus G14 with AMD’s new Ryzen 9 4900HS. It was competitive with the NUC 9 in single-core and won in multi-core. That’s not great for Intel’s i9-9980HK. The Asus Zephyrus G14 is a small gaming laptop, so you wouldn’t expect it to beat the NUC 9, but its victory is clear.

Other benchmarks tell a similar story. Our Handbrake benchmark, which uses the popular video encoding software to transcode a 4K movie trailer, finished in 114 seconds on the NUC 9. That’s barely ahead of the Acer ConceptD 9, but behind the Asus Zephyrus G14. The Core i9-9980HK also falls behind Intel’s Core i9-9900K, a processor built for desktops.

I saw a Cinebench R20 score of 3,348 from the NUC 9. Again, this is a bit above most laptops with the same chip, but not at the head of the class.

It’s worth pointing out that, despite these mixed results, the Core i9-9980HK is no slouch. It easily defeats the Intel Core i7 H-Series mobile processors currently available. It also defeats previous NUC desktops with ease. This is a fast processor that is capable of handling serious workloads, like 4K content creation or high-resolution photo editing. It will put the majority of laptops to shame and keep pace with some mid-tower desktops.

Still, I don’t think this level of processor performance cuts it in 2020 — not at a retail price of $1,700 excluding RAM, hard drive, and graphics card, which aren’t included in the kit.

As I just mentioned, the Intel NUC 9 Extreme Kit doesn’t include a graphics card. You’ll have to source one yourself, so your mileage will vary based on what video card you purchase. The NUC 9 can fit dual-wide video cards up to 8 inches long. My review unit arrived with an Asus-branded RTX 2070 designed to fit in the NUC 9, so I gave it a go.

Fortnite was a cinch to play. It cranked out an average of 141 frames per second at 1080p resolution and Epic detail, and 90 fps at 1440p resolution and Epic detail. These figures aren’t surprising for a desktop packing Nvidia’s RTX 2070, but they easily outclass laptops with RTX 2070 hardware. The Razer Blade 15 with Nvidia RTX 2070 Max-Q only hits 72 frames per second under these same conditions. Clearly, the NUC 9’s small size isn’t holding it back.

Assassin’s Creed Odyssey, our most demanding game benchmark, put the brakes on the NUC 9 – but only at 1440p resolution.

Civilization VI performed exceptionally well. It averaged 120 fps at 1080p and Ultra detail with 2x MSAA turned on, and still turned in 100 fps at 1440p and the same settings. These figures put a lot of distance between the NUC 9 and laptops with Nvidia RTX 2070 hardware.

As the Intel NUC 9 Extreme Kit doesn’t ship with a GPU, the main question is this; does the CPU hold the system back in any way? I think the answer is definitively “no.” The Core i9-9980HK is a capable processor with a strong balance of single-core and multi-core performance. It’s not the new hotness, however, and is currently outclassed by newer processors just launched from both Intel and AMD.

The NUC 9 Extreme Kit has a lot going for it, but its performance is not without consequence. Packing a lot of hardware into a small space can make cooling tricky, and the NUC 9 stumbles on this problem.

Fan noise is the real issue. The NUC 9 has several small fans, including those in the power supply and the Compute Unit itself. These fans sometimes must spin quickly, which inevitably makes a racket. Worse, the NUC 9’s mesh side panels do nothing to isolate sound.

This adds up to a rowdy little desktop. The NUC 9’s fans rush into action frequently and, at maximum speed, sound ready to drown out your robot vacuum. The fans are erratic and harsh, bouncing back and forth between high and low-speed states.

Intel’s NUC 9 Extreme Kit is an experiment that has promise but doesn’t quite work. The Compute Element is an intriguing way to add upgradability to a very small desktop. Unfortunately, it’s not as intuitive as I hoped.

The NUC 9 Extreme Kit is also held up by its sky-high estimated retail price of $1,700 — which doesn’t include memory, storage, or a video card, all of which must be purchased separately.

That depends on what you’re looking for.

The NUC 9 Extreme Kit’s unique modular design leaves it without a direct competitor, but you might cross-shop it with other small PCs like Apple’s Mac Mini, or smaller incarnations of the Lenovo ThinkCentre and HP Z Workstations. The Intel NUC 9 might be a compelling small workstation thanks to its excellent port selection and promises of future upgrades, though I’m not sure its processor performance is price competitive. It’s a great mobile chip, but you can find standard desktop components in some systems at a comparable price point.

As a gaming desktop, the NUC 9 is simply too expensive. A system configured like the one I tested would set you back between $2,400 and $2,800, depending on the exact components you source and any sales you might manage to snag. That’s just too much for the performance offered. You can easily snag a desktop with an RTX 2070 Super for that price, and it doesn’t have to be much larger. The Origin Chronos and Falcon Northwest Tiki are great lesser-known alternatives.

Like most powerful desktops, the Intel NUC 9 Extreme Kit will remain useful for many years. It will easily last a decade or more, though it obviously will pale in comparison to new hardware after a few years go by.

Intel delivers a standard 3-year limited warranty for NUC hardware. This is unusual. Most competitors only provide a 1-year warranty.

No. Intel’s NUC 9 Extreme Kit, as it exists today, works better as a thought experiment than an everyday desktop.