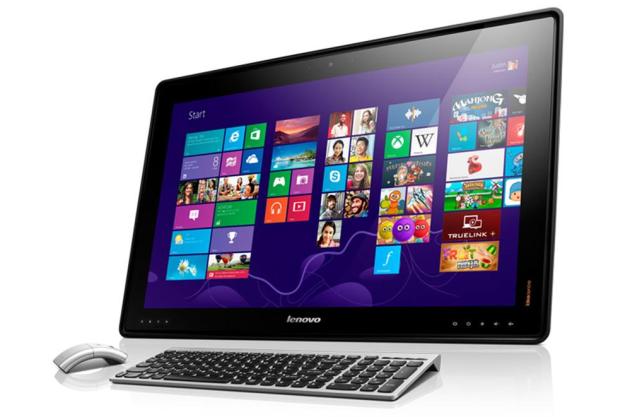 “Lenovo’s Horizon proves that the table PC can actually be fun, but a high price tag and poor performance limit its potential.”

When the iPad was released three years ago, some jokingly panned it for being too large. A 10-inch touchscreen device? Who would want to carry such a thing? Isn’t it just a huge phone?

With today’s truly plus-sized slates, those criticisms seem humorous for a different reason. There are now several available (or soon to be available) – like the Dell XPS 18, Acer Aspire R7, Asus Transformer, and the Sony Vaio Tap 20 – and the biggest of them all is the IdeaCentre Horizon.

Lenovo’s announcement of the Horizon was quick to point out that the all-in-one, which features the unusual combination of a 27-inch display with an internal battery, is not a tablet. Instead, the company branded it as a “table PC” that promised to bring the entire family together. In fact, Intel’s press conference at CES 2013 featured the Horizon, which was used by a small family to play Monopoly and view photos.

When not used for game night, however, the Horizon is a large all-in-one PC with specifications similar to the existing Lenovo A730. Our review unit arrived with a Core i5-3337U processor, a GeForce GT620M discrete graphics solution, and 8GB of RAM. The retail price of this configuration is $1,499, which seems a bit steep. Let’s hope the internal battery and unique design make it a worthwhile value.

At first glance, the Horizon doesn’t look much different from other all-in-ones. The attractive stand found on the Lenovo A-Series would get in the way of table use, and the company replaced it with a simple (yet sturdy) prop stand. This means the display’s bottom edge rests on the desk or table beneath it – a design trait common among inexpensive all-in-ones.

This cheapens the PC’s look, yet also has functional purpose. Users can retract the prop stand into the computer by simply flipping it, which lets the Horizon rest flat. Though the display is large, the chassis is barely more than an inch thick, which gives users the illusion that the touchscreen is part of the surface it’s sitting on. This is no bulky addition.

Life as a table PC might be harsh, so Lenovo has lined the Horizon’s edges with rubber. Once again, this feels cheap, but makes good practical sense. Accidental bumps shouldn’t cause any damage. The display’s glass appears thick as well. Lenovo replaces physical buttons with touch to control system functions like volume, which means there are no buttons to break and no seams for liquid to leak through.

Only two USB ports (both 3.0) are available on the Horizon along with HDMI-in, individual headphone/microphone jacks, and a card reader. While all-in-one PCs tend to have fewer ports than desktops, the selection here is particularly poor. We wish Lenovo included HDMI-out so that the option of hooking up an external display was available.

The display on an all-in-one is critical since it can’t be swapped out for another. What you see is what you get until the PC is sent to the dumpster.

Lenovo has wisely acknowledged this by providing one of the better all-in-one displays we’ve recently tested. Our benchmarks revealed the Horizon capable of rendering 96 percent of the sRGB spectrum while simultaneously offering deep black levels and excellent maximum brightness. Contrast proved stellar as well.

However, our one complaint lies with the resolution. The display is 1080p, which sounds great but actually results in visual pixilation during normal use. Converting the Horizon into a table PC made the problem worse as we huddled over the display, bringing each chunky pixel within a couple of feet of our eyes. Though not a deal breaker, we prefer to see a resolution of 2560 x 1440 in a system of this size.

Audio quality isn’t bad, though it suffers from the sound staging issues common among all-in-one PCs. Maximum volume is sufficiently loud for use in a quiet room and the speakers remain crisp in most situations. A pair of external speakers with a subwoofer will be an upgrade, but they aren’t required.

Laying the Horizon flat muffles the system’s audio, which is a strange flaw for a computer built to be used as a table PC. An intense match of air hockey on the touchscreen, for example, can drown out the speakers.

One thing’s for sure; Lenovo knows how to make a proper keyboard. The company’s laptops usually offer a great typing experience, and this translates to the desktop as well. Our review unit came with a weighty wireless keyboard that offered good key feel and plenty of space. Most users will have no reason to replace it.

The mouse’s diminutive size and meager amount of buttons (two) left less of an impression on us. Though the mouse is light and feels sturdy for its size, users with small hands will likely find it sufficient. Those with large hands, however, will want a bigger, heavier mouse.

Lenovo also ships the Horizon with a set of unique extras designed for games. These include touch-sensitive pucks (for air hockey), joysticks (for shooters) and e-dice (for board games). All of these peripherals work well and feel durable enough to survive play by both children and adults.

I can see your Aura

Microsoft designed Windows 8 for touch, but the operating system’s focus is on tablet computers and upright all-in-ones – not on table PCs. To solve this problem, Lenovo has devised a unique software interface called Aura.

Once launched, Aura replaces the desktop with an entirely different environment built around a central pinwheel. The seven options on this wheel offer a curved display of sub-selections that the user can scroll through and access additional options via touch. This is a great solution that reminds us of how some iOS games resolve the need for fine-grain interface options on a device with limited display space.

Aura also includes a number of bundled apps, like a photo viewer and music player. Most of them work well, and none of them seemed of poor quality. But while we respect the effort, the interface is just a bandage placed over flaws in Windows 8. Users can explore all that Aura has to offer in a half-hour, and only a few apps have lasting appeal.

The games, however, are a different story. There are nine games bundled with the Horizon and some are great fun. Air Hockey is a fun small-scale reproduction of the real thing that works well with the included puck peripherals, and the Texas Holdem app is surprisingly well thought-out (you can even flip the edge of your cards to view them, keeping them secret so long as you place your hand above them).

Still, there are only so many games included, and third-party support remains an open question. Lenovo has the right idea, but it’s operating as an island. The value added by Aura can’t reach its full potential.

Our review unit came with a processor meant for Ultrabooks, the Core i5-3337U, and performance suffered as a result. SiSoft Sandra’s Processor Arithmetic test reached a score of 39.4 GOPS, and 7-Zip returned a result of 7,380 MIPS. Both scores are fine … for a laptop. They’re below average for an all-in-one PC.

PCMark 7, which simultaneously tests multiple components, reached a disappointing score of 2,805. Poor storage performance from the 1TB mechanical hard drive, along with so-so results everywhere else, contributed to this score. This is not to say performance feels slow in everyday use, but certain activities (such as multi-tasking with a number of apps) can reveal some lag. Even Aura felt slow or unresponsive at times.

While the Horizon ships with discrete graphics, the chip is Nvidia’s low-end GT 620M, which reached a 3DMark Cloud Gate score of 4,041 and a Fire Strike score of 690. These numbers are barely quicker than Intel HD 4000 – which forces us to wonder what’s the point? The poor graphics performance had a noticeable impact during some of the bundled games, which at times stuttered or lagged. Serious gamers should stay far, far away.

A battery? In an all-in-one?

A table PC that requires a power connection at all times is just one trip away from a lawsuit. Lenovo has packed an internal battery in the Horizon to head off this inconvenience.

There are limits to what a lone PC manufacturer can accomplish, however, and they’ve been met here.

Of course, the battery doesn’t last long. In our tests, we were barely able to reach over two hours of Web browsing time, and heavy use can drain a full charge in one hour and 45 minutes. Charging the battery can take four hours or more if the PC is in use, though shutting the computer down or putting it into sleep while charging can speed up that number considerably.

The less-than-two-hour battery time is still enough time to play Monopoly or view photos, so the battery does what it’s meant to do.

Our power tests revealed one benefit of the Horizon’s hardware: minimal power consumption. At idle with the display at 100 percent, the Horizon consumed 44 watts, and that figure increased to just 69 watts at maximum load. HP’s SpectreOne consumes less power at idle (due to its dim display) but uses more at load.

Only a little loud

Our decibel meter registered just 42 decibels of noise from the Horizon at idle. That’s not much, but it is higher than many other desktop and all-in-one systems. Though quiet, the fan was persistently audible.

Noise levels at load crept up to 45.6 decibles, which is higher than the HP SpectreOne and Acer Aspire U, which scored 43.1 decibels and 41.2 decibels, respectively. This is still a moderate result, but it’s loud enough to prove an annoyance to those easily distracted by fan noise.

Lenovo has tried to think of everything with the Horizon. Consumers can even buy a table built specifically for it (we didn’t receive the table, so can’t comment on its quality). Careful thought went into everything from the interface to the peripherals.

There are limits to what a lone PC manufacturer can accomplish, however, and they’ve been met here. Aura is pleasing, its apps are useful, and some of its games are good fun, but what ships with the system is probably all you’ll ever use. Once you’ve become familiar with the bundled software, the wow factor will wear off and you’ll be left with an all-in-one that’s not so different from everything else on the market.

That’s a problem, as the Horizon isn’t competitive against market leaders such as the Dell XPS One 27. The hardware isn’t quick enough to keep pace, and the display, though beautiful, could use extra pixels. Then there’s the price … $1,499 is a lot to ask for an all-in-one with weak performance.

We think the Horizon is a step is an interesting direction, but Lenovo can’t embark on this journey alone. Tablet PCs need faster hardware and better operating system support to appeal to a mainstream audience. Intel’s new Haswell processors might provide the former, but Microsoft’s answer could take years to materialize.