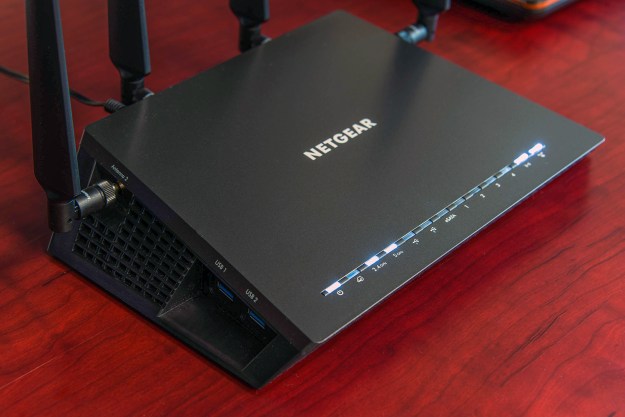 Lots of people complain about Wi-Fi, but very few do anything about it. If you’re serious about taking action, there are more and more high-end routers on the market that make powerful coverage and high speeds possible.

Netgear’s Nighthawk X4S gaming router is for exactly that sort of person. At $260, it’s not cheap, but that money gives you an 802.11ac router with combined bandwidth of up to 2.53Gbps. Four antenna and MU-MIMO capability means it can handle large houses, at least in theory. All of this is backed by a 1.7GHz dual core processor and 512 MB of RAM.

The X4S can’t match the $400 Netgear Nighthawk X8, which we reviewed earlier this year, for performance – it offers speeds of up to 5.3Gbps. But for most people, the 2.53Gbps offered by the X4S is more than enough. And the $260 price point is far more reasonable.

An alien probe for your living room

There are routers designed to be subtle, and then there’s the Nighthawk X4S. With a jet-black exterior and jagged angles, the router looks like a spaceship or stealth bomber. If you’re a gamer you’ll likely think it looks cool, but it might not fit into everyone’s decor.

Wherever you put this router, it’s going to take up a fair bit of space. At 11.22 inches long, 7.26 inches wide, and 1.97 inches tall at its high point, the X4S can’t be tucked away in a corner, especially not with two pairs of 5 and a half inch antenna sticking out of it.

The LED lights on the Nighthawk X4S are bright, to the point where I occasionally went to bed thinking I’d left the lamp on downstairs. Fortunately, there’s a switch on the back that turns the lights off.

There are five gigabit Ethernet ports on the back of this router — four LAN ports for your devices, and one WAN port for connecting to the Internet. They’re joined by two USB 3.0 ports for external drives, and an eSATA plug for directly connecting another device. That’s a lot of connectivity, so you’ll have no shortage of room for network attached storage.

But it’s the wireless capabilities that make this router special. The combined bandwidth is a staggering 2.53Gbps spread over two frequencies. You’ll get 800 Mbps using a 2.4GHz connection and 1,733 Mbps connection using the 5GHz option.

The two connections are offered as separate networks with their own SSIDs. This means uses can pick between the high-bandwidth 5GHz connection, and the 2.4GHz connection, which often provides better range.

Fast speeds from any corner of your house

The Nighthawk X4S offers MU-MIMO, meaning signal is sent directly to connected devices instead of broadcasting in all directions.  Netgear advertises this router as ideal for large houses, which my two-bedroom townhome is not. That means every room in my home was absolutely blanketed in Wi-Fi signal, and the Nighthawk X4S easily beat out nearby competing Wi-Fi routers for bandwidth on the wireless spectrum.

We couldn’t be happier with the router’s performance.

To check the “large house” claim, I took my phone and went for a walk outside. I was surprised to learn I could refresh my Twitter timeline from half a block away. It wasn’t a fast connection at that distance, but it was impressive that it worked at all.

I consistently saw the maximum Internet speed I’m paying my ISP for — 30Mbps, up and down. Streaming HD video isn’t a problem, to say the least, and gaming is free of lag and other slowdowns. Downloads were fast, and my networked backups consistently uploaded to a local drive at speeds of around 70Mbps.

An interface for gurus

First-time configuration is straight-forward. You can connect to the router using an Ethernet cable, or consult the sticker for a unique SSID and passcode to connect wirelessly.

Once you’re connected, you can configure the router by heading to routerlogin.net on your browser. The interface isn’t pretty, and compared to the simplified UI of the Google OnHub router is downright cryptic, but if you know your way around a router, you should be able to configure anything here without a lot of difficulty.

The USB ports can connect to printers and share them over the network, or serve up any attached drive as a network drive or media server. Setting this up is going to take some experimentation in the settings, but works well once it’s all set up.

If you’d prefer not to use a web interface, there are mobile apps available for Android and iOS, as well as desktop clients for Mac and PC. This is necessary to access some settings, including Parental Control.

Netgear provides a one year warranty for the Nighthawk X4S. While that’s standard for most electronic devices, it does seem like a router at this pricepoint could be covered longer than that.

A solid option, but shop around before deciding

The X4S isn’t the top-of-the line Netgear Nighthawk router, but it does offer more bandwidth than most people need at a lower price point than the overpowered Nighthawk X8.

Still, there are arguably better deals out there among high end routers. The Linksys EA7500 and Google’s OnHub routers both offer speeds of 1.9Gbps for $200, still plenty of bandwidth for most users. And both feature backend interfaces a great deal easier to handle than Netgear’s.

Neither match the power of the X4S, and neither can match the connectivity options provided by two USB 3.0 ports. For this reason we think the Netgear Nighthawk X4S will appeal to power users who want a gobs bandwidth and tons of attached storage.

If you’re going to spend a lot on a router, make sure you do your homework first, and select one with the features and ease-of-use your desire. A router like the X4S can prove exceedingly capable, but it’ll be too much for users who want a set-it-and-forget-it router.