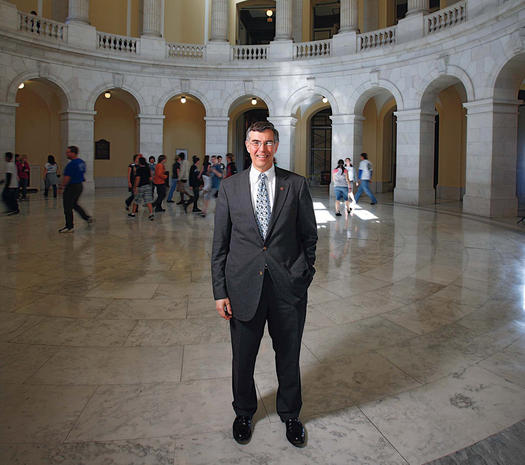 In an informal round of Jeopardy, IBM’s infamous Watson took on the United States Congress. And if anything, the spar should comfort Americans that we have at least one very smart man in government. While various lawmakers were able to hold their own against the supercomputer, only New Jersey representative Rush Holt was able to best the machine.

Holt happens to be more of a Jeopardy veteran than Watson is. He is a five-time champion of the trivia show who just so happens to hold his Ph.D. in physics and has been involved in monitoring global nuclear happenings.  So, yeah, guy’s pretty smart.

The congressman was able to collect $8,600 in his round, compared to Watson’s $6,200 (which, bear in mind, was hypothetical prize money). And even though he proved man could indeed beat machine, Holt was nonetheless impressed by IBM’s creation. According to CNN, “Holt expressed admiration for the machine, saying the technology has the potential to be extremely useful at times when tough decision-making is required in field such as medical diagnosis, air traffic control or situations that require piecing together bits of knowledge.”

While Holt won the round, Watson won the night and beat Congress $40,330 to $30,000. We already know that the healthcare industry is interested in harnessing Watson’s powers for good, but it’s yet to be seen where else the supercomputer will lend its capabilities.

Nvidia’s upcoming RTX 4000 cards get new specs, and it’s not all good news