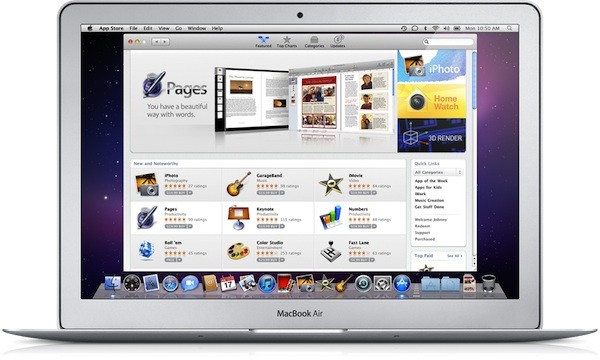 Apple may be ready to shed physical boxes and embrace all digital software distribution, according to a report by MacRumors. As part of the initiative, Apple will begin offering new Mac customers instructions on how to you use the recently launched Mac App Store to download software.

MacRumors suggests that Apple will likely use the extra space to stock more “higher profit” items like accessories for the iPad and iPhone. Some software, such as Adobe Photoshop and Microsoft Office, may continue to be sold as boxed packages, at least until they are offered through the Mac App Store.

Most of Apple’s most popular programs — iLife, iWork and Aperture 2, for example  — are already available through the Mac App Store. It’s been rumored that Microsoft is giving serious consideration to offering its Mac Office Suite through the App Store.

Topics
Ranking all 12 versions of Windows, from worst to best
The best game-streaming services for 2023
Best microSD cards in 2023: top picks for your computer, camera, or drone
The best Chromebooks for 2023
Apple Studio Display just got an unprecedented price cut
The best capture cards for 2023: Xbox, PlayStation, and PC
Hack involved the data of a nation’s entire population
Best Gaming PC Deals: Save on RTX 3070, 3080, 3090 PCs
The 6 biggest problems with ChatGPT right now
Pro users are already unhappy with the upcoming Mac Pro
How to schedule an email in Outlook
15 years later, the MacBook Air could soon have its best year ever
How to watch Super Bowl 2023 on your computer