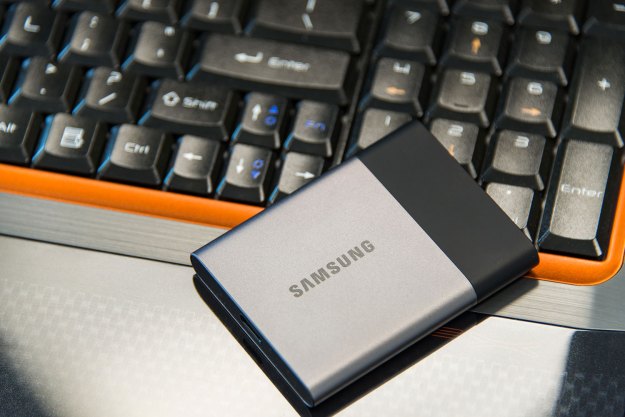 Solid state drives are common in modern laptops, particularly ones striving to be small. Most people plugging an external drive into those same laptops rely on a mechanical hard drive. For tasks like backing up, speed isn’t always considered essential.

But a mechanical drive isn’t always good enough. Video editors might need to dump a lot of footage into an external drive without waiting, as may photographers, or anyone else who generates a massive amount of data on a regular basis. Given the limited storage offered inside some laptops, people might even want to use the external drive for actually working on video files.

That’s the potential market for Samsung’s T3 External SSD, a 1.8-ounce drive that offers up to 2TB of storage and transfer speeds of up to 150 megabytes per second. The T3 is the follow up to last year’s T1 Portable SSD, which offered 1TB of storage space for $600. This year Samsung has doubled storage capacity. Though expensive, the T3 is obviously a better deal than the T1 on a per-gigabyte basis. The 1TB version of the T3 is only $430, meaning it offers substantial savings over the T1. The T3 is also offered at 500GB for $220, and 250GB for $130. If you want the full 2TB option, it will cost $850.

Does the Samsung T3 live up to its price? Is it truly as fast as advertised? And is such a device even practical?

Seriously? There’s 2 terabytes in that thing?

“That’s a hard drive?” my wife asked me, after seeing the T3. That’s a question almost everyone asks when they see the drive. It looks more like a plus-sized thumb drive, or a miniature smartphone battery, than an external hard drive.

The T3 is tiny. It’s around half the size of my phone, and significantly lighter. To be more precise, the exterior is roughly three inches long, two and a half inches wide, and half an inch think. It weights 1.8 ounces, or 53 grams (meaning the 2TB version weighs only .03 grams per gigabyte of storage space). This smaller and lighter than any external hard drive you’ve ever seen — bordering on flash drive territory, really.

And the T3 isn’t just smaller than most external drives. It’s shaped differently, too. The case is curved along its sides and flat on the ends. It’s built primarily from aluminum, with a black strip of matte plastic making up a portion of the case. While the old T1 looked nice, it was built entirely from plastic and felt dinky as a result. The new T3 weighs slightly more because of its use of aluminum, but the change in materials adds a touch a class. The new, sturdier exterior is functional, too. Samsung advertises the drive as shock resistant up to 1500G of force. The company made no such claim about the T1.

There’s a subtle blue-red LED on the drive’s end, alongside an input that connects to your PC using the included USB 3.0 cable, which is rather short at just 18 inches. Because the T3 is so light, it can simply hang off a PC’s USB port without much risk of damage, but we wish Samsung would have included a longer, higher-quality cable with the drive.

You’re probably not buying this drive as a fashion statement alone. At this price point, performance needs to be cutting edge. Samsung’s advertised speed for the T3 is “up to 450 megabytes per second,” meaning that is the top speed users can expect, though real-world speeds are going to depend a lot on your hardware. If you’re not using a USB 3.0 port, or you’re transferring files from a mechanical hard drive, those types of items can slow the drive down.

The T3 is tiny. It’s around half the size of an iPhone, and significantly lighter.

With this in mind, we plugged the T3 into a USB 3.0 port and ran a few benchmarks. CrystalDiskMark showed an average read speed of 422 megabytes per second and a write speed of 393MBps.

Our results show a faster write speed than last year’s model, the Samsung T1 Portable SSD, with a slightly lower write speed. Regardless, this is really fast for an external drive, and approaches the speed of some internal SSDs. The Transcend SSD 370, for example, is a mid-range internal SSD that offers read speeds of 521.2MBps — faster than the T3, but not by lot when you consider the innate power and speed limitations of external drives and the USB 3.0 standard. The T3 absolutely stomps mechanical external drives, which approach 140MBps at best.

Benchmarks can be abstract, and to me it was transferring files that made the power of this drive stand out. I dumped a 36GB folder of HD videos from my PVR onto an internal SSD, then transferred them to the Samsung T3. The transfer took just barely under 2 minutes, and speeds throughout the transfer held at 314MBps.

This a very fast external drive. As far as we know, it’s the fastest external hard drive sold today. Photographers, videographers, and anyone else who need to quickly move a lot of information will be pleased, if they can afford it. With speeds like this, it’s not at all impractical to perform tasks like video editing without even transferring the files to your computer. The connection is fast enough to edit directly on the drive.

It comes with encryption software

The T3 comes with AES 256-bit hardware encryption, which is increadibly easy to set up. On the drive itself are installers for Windows, Mac, and Android systems. Set it up and you can set a password for the drive, which will quickly encrypt the entire contents of the drive.

Forget the password, however, and you’re screwed: there’s no way you’re decrypting AES 256-bit encryption without access to an NSA supercomputer, and even then the odds are overwhelmingly against you. This is not a feature for anyone used to hitting the “Forgot Password” button, because one will not be offered here.

After enabling the feature you’ll need the software installed on any computers you want to use the drive with, so plan ahead.

Samsung offers a limited three-year warranty for the T3, which is generous when you consider most external drives are only covered for a year. Considering the price point, however, some customers might expect an even longer warranty.

Not cheap, but gives storage space and speed in a small

The T3 is a big step forward for Samsung’s line of external solid state drives. The price per gigabyte has come down considerably, read speeds are up, and the design has been streamlined. Sure, our tests showed write speeds were down a little, but in almost every other way the T3 is a better deal than the T1. The 1TB versions, which is $430, is particularly attractive.

Having said all that, is the expensive T3 practical? That depends on your needs. A mechanical external drive is much more cost effective on a price-per-gigabyte basis, so it makes more sense for long-term backup storage, or storing files that are not frequently accessed.

Samsung’s T3 Portable is in a different league. It’s the quickest external drive available today, and in 2TB form, one of the largest external solid state drives available. If you need an external fast drive, or a large drive – and especially if you need both – the T3 makes sense.