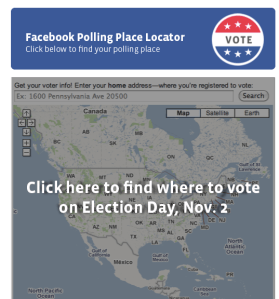 If you’re not planning on voting in today’s general elections, then the Internet might not let you forget it. Several popular social networking sites are taking up the cause and motivating users to participate in today’s General Election.

Facebook is doing its part by encouraging users to momentarily forget about browsing through last weekend’s Halloween pictures long enough to head to a polling place.  Users over the age of 18 who sign into Facebook today will be greeted with a message reminding them that it is, in fact, Election Day. There is also a link to Facebook’s Polling Place Locator widget, which will kindly direct folks to the nearest place where they can cast their vote. Facebook users who do vote – or who want their friends to think they voted –  can click the “I Voted” button to broadcast their commitment to the democratic process. The site will be keeping a running tally on which of your friends clicked the “I Voted” button along with the total number of Facebook users who claim to have cast ballots.

In a statement the Palo Alto-based company affirmed its commitment to civic engagement saying, “Today is Election Day in the United States and Facebook is committed to encouraging people who use our service to participate in the democratic process.”

Foursquare is offering would-be voters similar incentives. Users of the location-based mobile app will be able to check-in when they arrive at their voting places and alert friends of their civic participation with a special “I Voted” badge — the badge system is like a virtual trophy case for showing that you’ve accomplished certain tasks. Foursquare plans to compile voting place check-ins on a Webpage with a statistical breakdown of users’ voting activity.

Twitter won’t let users slip easily into apathy either. In a blog posting, the company directs users to the Twitter feeds of political parties for some last minute micro-guidance on election issues. In similar fashion to Facebook and Foursquare, Twitter also encourages voters to skip out on the traditional “I Voted” sticker and go virtual by signaling their participation to followers by using the hashtag #ivoted.