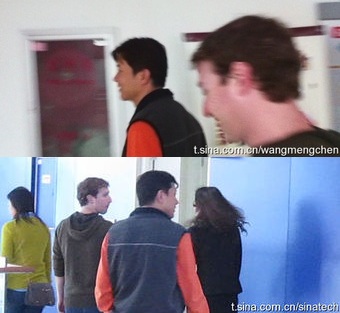 Facebook has somewhere between 550 million and 600 million users, but Mark Zuckerberg is seeing red. The social networking CEO is visiting China, one of the largest countries where Facebook has no presence. Shanghaiist reports that Time’s Person of the Year toured the headquarters of China’s largest search engine, Baidu. The woman you see on the right is Priscilla Chan, his girlfriend.

Zuckerberg’s interest in China is known. “How can you connect the whole world if you leave out 1.6 billion people?” he asked in October. China is one of the fastest growing markets in the world for, well, just about everything. Baidu has 300 million users and is an essential ally if he ever hopes to run China’s top social network. Currently, Facebook is banned in China, along with many other social sites like Twitter and YouTube.

The biggest hurdle to Facebook operating in China will likely be the willingness of Zuckerberg to cater to the Chinese government and censor its Website. Google had a big tussle with China last year after the Chinese Gov’t demanded it censor its search results and covertly tried to hack its systems.

Still, it’s not all business for Zuckerberg. According to Gawker, he has been learning Mandarin for some time and plans to visit a Tibetan temple in Beijing today with Chan. Hopefully he’ll have some fun while he’s there.

Topics
Twitter joins Facebook and Google in banning cryptocurrency advertising
You can now mute more annoying ads with Google’s new ad controls
Google Maps' automatic review translation makes finding a restaurant even easier
Google just made it easier to find travel deals and book them on your phone
What is ChatGPT Plus? Everything we know about the premium tier
ChatGPT Plus to bring priority access during peak times — at a hefty price
Usually $3,879, this Lenovo laptop is down to $1,479 today
Get this Asus gaming laptop with an RTX 3060 while it’s $400 off
All of Samsung’s videos from today’s Galaxy Unpacked event
Best 2-in-1 laptop deals: Save on Dell, Lenovo, HP and more
The best USB-C cables for 2023
Apple just found a bizarre way to make virtual keyboards less annoying
Forget the MacBook Pro 16: Dell XPS 15 is $400 off right now