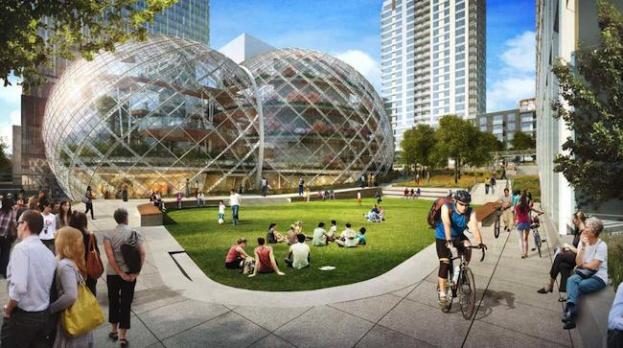 It’s a design that looks more botanical-garden than space-for-office-workers, but according to plans [pdf] released by Amazon for a new Seattle-based campus, there will be desks, meeting rooms and water coolers among all the foliage.

Designed by architecture firm NBBJ, the biosphere-like campus, located in the downtown area of the city, will comprise more than three million square feet of office space spread throughout three 37-story office towers and three enormous glass-and-steel spheres. That’s right, three enormous spheres. Up to 95 feet high, the spheres will incorporate work, dining, meeting and lounge spaces, and be home to “ecologies found around the globe”, NBBJ said in its plans.

The architecture firm added: “While the form of the building will be visually reminiscent of a greenhouse or conservatory, plant material will be selected for its ability to co-exist in a microclimate that also suits people,” a feature sure to delight any green-fingered employees among the Amazon workforce. And it’s not just plants that’ll be sprouting up around the office: “To encourage growth and maintain the health of the plants, the building’s interior will include high bay spaces….capable of accommodating mature trees.”

NBBJ said that ultimately the intent behind its design is “to create an alternative environment….where employees can work and socialize in a more natural, park-like setting.”

The green areas between the spheres would be open to the public, as would several retail spaces on the site.

Discussing Amazon’s plans at a Design Review Board meeting at Seattle’s City Hall on Tuesday evening, board member Gabe Grant described the design as “optimistic, forward-looking, experimental, exciting [and] whimsical.”

Summing up his firm’s plans, NBBJ’s John Savo told the board, “We’re striving to create an environment in which to work and think a little differently.”

Amazon’s “whimsical” design follows in the footsteps of other big players in the tech world. Apple is set to build its ‘spaceship’ campus in Cupertino, Facebook has plans for a striking new campus designed by internationally acclaimed architect Frank Gehry, and Google is set to build something out of the ordinary in London in the next couple of years.

Topics
The best light therapy lamps
CES 2022: The biggest news and announcements so far
Taco Bell’s Xbox Game Pass-style pass will put a taco in your belly daily for $10 a month
The weirdest tech we spotted at CES 2022
K-pop NFTs are here, but I’m not convinced they’re worth it
Solving VR’s ‘infinite walking’ problem with moon boots
Fighting football injuries with 3D-printed, hyper-personalized pads
Inside the U.K. lab that connects brains to quantum computers
ClipDart is an on-demand barber app aimed at people of color
How 5G is changing journalism
Why the moon needs a space traffic control system
10 female inventors who changed the world forever
The most influential women in tech history