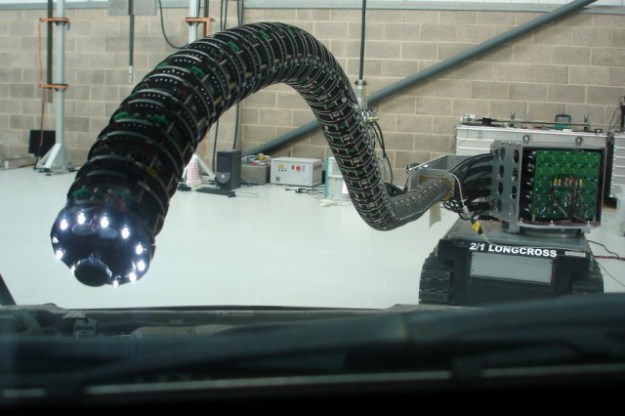 Engineers at a robotics design firm in Bristol, UK have come up with a unique snake-like machine that wouldn’t look out of place in a big budget sci-fi movie.

Developed by OC Robotics, engineers have been working on the revolutionary bendy robot, known as the snake-arm, for the last 10 years. The result is a remarkable piece of technology that can, according to its designers, “reach the unreachable.”

Industries around the world have been showing an interest in the snake-arm, including the nuclear sector, where the robot could be sent into confined spaces or into places too dangerous for humans.

OC Robotics’ managing director, Rob Buckingham, spoke to CNN about the development of the snake-arm. “Just like the human arm, the big muscles that drive them are actually mounted on the back and tendons link the muscles to the joints.”

He continued, “Basically, we’ve taken that principle to an extreme and use wire ropes as tendons and all the motors (actuators) that control the arm are at the base of the robot.”

The snake-arm is a wonderfully versatile piece of kit as it allows tools such as video cameras, lights, tack welding, cutting, gripping and swabbing gear to be fitted to its tip.

Operation is straightforward enough, with a person using only a computer screen and a control pad. The company has even put up a simulator on its website so that you can get some idea of what it’s like to control the snake-arm.

The robot has already been used at nuclear facilities in Sweden and Canada. Its makers have also offered it to the operators of the stricken nuclear power plant in Fukushima in Japan although they’re still awaiting a response.

Recent interest has come from the airline industry with both Airbus and Boeing examining how the snake-arm might be used during the manufacture of wings and fuselages.

The US and UK military has also asked for demonstrations of the innovative robot. And if there is a Hollywood director out there who finds out about it, presumably it could be used in a sci-fi movie too.

Below is a BBC report showing the impressive snake-arm in action.