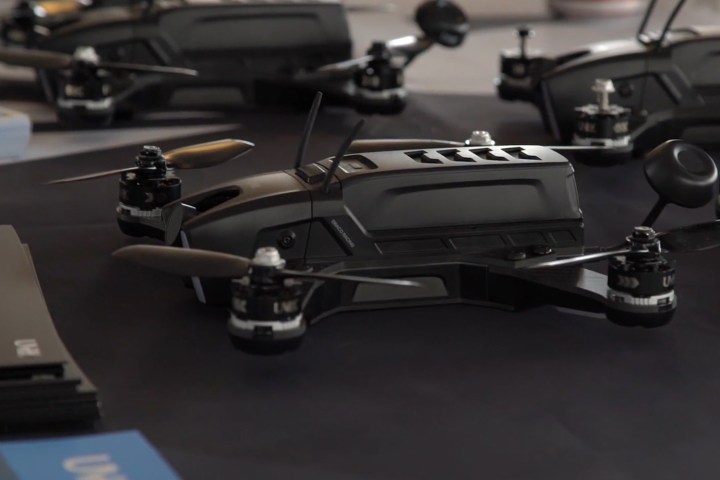 Every year, drones seem to dominate more and more showfloor space at CES — and 2018 was no different. This year we saw drones of all shapes, sizes, and purposes. But what were our favorites? Glad you asked. Here’s a quick rundown of all the best drones at CES 2018.

This little guy is a pint-sized powerhouse. Despite the fact that Oori is much smaller than Uvify’s flagship racing drones, it still packs quite a punch. Floor it, and this little monster will zip through the air at over 60 miles per hour.  It also comes with a dedicated controller that features a built-in first-person-view (FPV) display. It’s an absolute riot to fly — especially if you have a pair of FPV goggles handy. In fact, we enjoyed it so much that we gave Oori one of our Top Tech of CES awards.

Yuneec’s original Typhoon H is one of our favorite drones in existence — despite the fact that its more than two years old at this point. We didn’t even need a new-and-improved version, but Yuneec went ahead and made one anyway. The new Typhoon H+ brings a myriad of nifty upgrades to the table — including quieter motors, more robust obstacle avoidance, and a much nicer camera rig. When this thing hits the market later this year, it’s going to give DJI’s Phantom 4 Pro a run for its money.

There’s an old adage that photographers often use: “The best camera is the one you have with you.” The same could be said for drones. What good is a selfie drone if you forget to bring it along? Well, that’s precisely the problem that AEE aims to fix with its new Selfly drone. It’s a quadcopter that, thanks to a super-clever design, is able to fold up and fit inside a smartphone case. The idea is that, since it’s always attached to the back of your phone, you’ll never find yourself in a situation where you don’t have a camera drone at your disposal. Bonus points: It’s also surprisingly stable and easy to fly.

The original Airselfie launched on Kickstarter in 2016, but now the company is back with a new-and-improved version that makes the old model look like a brick. Airselfie 2 builds upon the original design, upgrades the camera from five to 12 megapixels, increases the camera’s field of view to 85 degrees, and improves battery life by 50 percent. Plus, based on a very brief flight test we performed on the show floor, it also seems to be a bit more stable and reliable in the air.

Generally speaking, drones that cost less than $100 bucks aren’t worth your time. They’re flimsy, they lack advanced features, and they’re almost always squirrely as hell in the air. But Tello is different. Despite the fact that it’ll retail for only $99 when it hits the market later this year, it packs a boatload of high-end features and functionality. For example, it boasts a 360 degree camera, an Intel vision processing chip, flight stabilization from DJI, and some damn decent battery life.

Apple iPhone 13 buying guide: Release date, price, specs — everything we know
Parrot’s 4G-connected Anafi Ai drone is the Google Maps car of the skies
Sony’s first drone, the Airpeak S1, rockets to 55 mph in just 3.5 seconds
The best telescopes
The best light therapy lamps
CES 2022: The biggest news and announcements so far
Taco Bell’s Xbox Game Pass-style pass will put a taco in your belly daily for $10 a month
The weirdest tech we spotted at CES 2022
K-pop NFTs are here, but I’m not convinced they’re worth it
Solving VR’s ‘infinite walking’ problem with moon boots
Fighting football injuries with 3D-printed, hyper-personalized pads
Inside the U.K. lab that connects brains to quantum computers
ClipDart is an on-demand barber app aimed at people of color