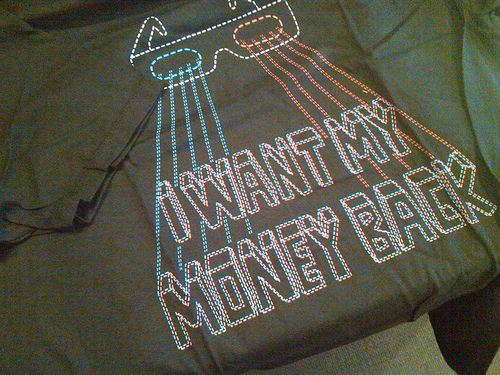 Market research company NPD says that US consumers still aren’t buying 3DTVs, despite being aware of them. 3D has had a difficult time proving itself with buyers, which formerly could at least be somewhat blamed on consumer confusion and lack of exposure to the platform. But now we’re all caught up to speed and it’s not making a difference.

According to the survey, 3D glasses remain the largest obstacle standing in between consumers and 3D-capable TVs. But what about other products? Earlier today Nintendo announced it would be significantly cutting the price of the 3DS to $170. The 3D handheld gaming device was supposed to be a hit, and a product that Nintendo invested serious time, money, and marketing into. Unfortunately, there hasn’t been much of a payoff yet, and Nintendo just reported its first quarterly loss since 2003.

The 3DS likely hasn’t sold well for a few reasons, chief among them being the lack of 3D game titles to accompany the previously pricey device. But there have also been complaints of eye fatigue and implications that the 3DS isn’t suitable for a wide range of ages. We’ll soon find out if price was the problem or if the 3D device is fundamentally flawed. To be fair, the original price of the 3DS was immediately pinpointed as a potential downfall. But as with 3D TVs, Nintendo can in no way argue that disappointing sales are a result of consumer ignorance (or that the “those glasses are so obnoxious” situation applies). The 3DS was one of the most anticipated products up until its launch and generated ample attention among its target demographic.

3D smartphones haven’t received as much attention as gaming devices or televisions, but we’re inclined to say that most semi-interested smartphone users out there are aware of them. The jury is still out: There aren’t that many on the market, but we can see them falling subject to the same problems as the 3DS. 3D just might not be a feature consumers are convinced they want to pay even slightly more for in a smartphone. The HTC EVO 3D is $199.99 with a two-year contract, and while that doesn’t make it the most expensive phone on the market, it’s still up there.

Strangely, one 3D product that’s seen some notable traction lately is the 3D printer. Costs for the devices have gone down recently, making them much more attractive to the average consumer. And Web-based services offering to print your 3D creations and send them to you have also become popular.

But the fact remains that 3D just isn’t taking off: Whether it’s the price or the screen, the glasses or the apathy toward the technology, consumers just aren’t convinced – and the 3DS is just the latest example.

Topics
Audience Choice Awards: Top Tech of CES 2021
LG CES highlights: Everything announced for 2021
The future of making stuff: Inside the evolution of 3D printing with Formlabs
Digital Trends Top Tech of CES 2021 Awards
The best light therapy lamps
CES 2022: The biggest news and announcements so far
Taco Bell’s Xbox Game Pass-style pass will put a taco in your belly daily for $10 a month
The weirdest tech we spotted at CES 2022
K-pop NFTs are here, but I’m not convinced they’re worth it
Solving VR’s ‘infinite walking’ problem with moon boots
Fighting football injuries with 3D-printed, hyper-personalized pads
Inside the U.K. lab that connects brains to quantum computers
ClipDart is an on-demand barber app aimed at people of color