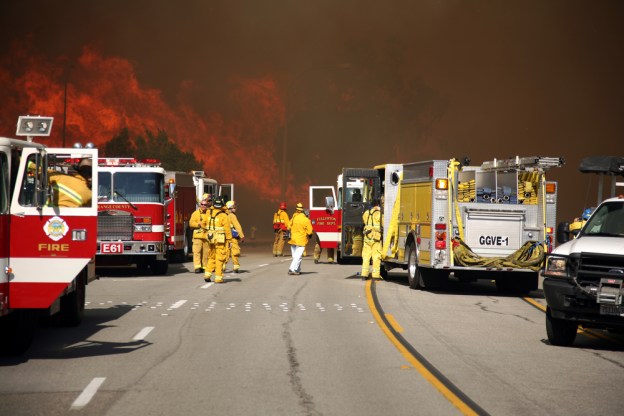 When wildfires flare up, they can get out of control and engulf huge areas in a matter of minutes. And when firefighters arrive on the scene, they can only survey the situation from one place – the ground.

A team of engineers from the University of Cincinnati realized how useful it would be if firefighters could view the blaze from high above, so they set about designing and building an unmanned camera-equipped flying machine that could be easily controlled and, most importantly, would be able to comfortably withstand the extreme conditions.

An on-board computer with video and fire-prediction software provides important data about fire intensity and direction, as well as information about the environment. The computer also utilizes Google Earth images and NOAA weather data.

The flying robot weighs five pounds, has a 54-inch wingspan and can travel at speeds of more than 35 miles per hour to altitudes of 10,000 feet. It has enough power to fly for about one hour, giving firefighters ample time to gather the information they need.

The project, called SIERRA (Surveillance for Intelligent Emergency Response Robotic Aircraft), is being supervised by Kelly Cohen, associate professor of aerospace engineering and engineering mechanics at the University of Cincinnati.

“What we are designing is a complete system,” Cohen told the university’s news website. “It is low-cost and low-risk. That is important for this application because, while the technology is ready, firefighters are not quick to adopt new technologies. We can show that this works.”

To prove its worth, the team linked up with firefighters in West Virginia during a training session. Once they had a controlled fire burning, the flying robot took to the skies.

The flying robot could even be used in other kinds of disaster areas, such as places hit by floods and earthquakes.

Any tool that can help lower the risk to the life of a firefighter, while at the same time enabling them to better deal with fires, should be carefully considered. The fact that the University of Cincinnati’s robot is unmanned, as well as cheap to build and operate, would no doubt make it a very attractive proposition to emergency response teams around the world.

[via Cnet; image by mikeledray / Shutterstock]