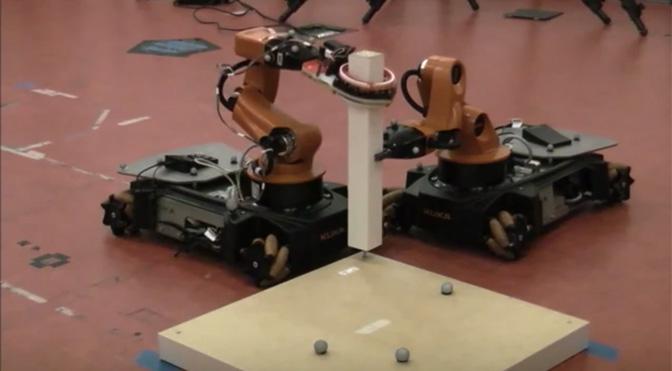 We’ve already got robots for some of life’s most tedious tasks – there’s the Roomba for vacuuming, the Looj for cleaning the gutters, and Siri for writing our texts when we’re too drunk to use our thumbs. In the utopian future, we’ll have a robot for every stupid chore we hate doing ourselves, and thanks to the wizards at MIT, we can finally cross one more of these tasks off the list: assembling IKEA furniture. Thats’s right, MIT researchers have actually developed a robot that will assemble flat-pack furniture on it’s own, with minimal direction.

This revolutionary contraption was unveiled earlier this week at the IEEE International Conference on Robotics and Automation (ICRA) by a team from MIT’s Distributed Robotics Laboratory. But before you crap yourself from being so impressed, you should know that the IKEAbot isn’t just one robot – it’s actually a pair of them. Just like with humans, it takes two to assemble a Borgsjö TV stand. Going it alone will only lead to frustration, rage, and involuntary enrollment in an anger management program. So, in an effort to avoid any outbursts of hellish robotic fury, the team from MIT wisely built the IkeaBot from a pair of KUKA  YouBots, each of which have been retrofitted with special arms for screwing things in. Not only is this a wildly innovative idea, it also finally gives us an answer to the age old question of “how many robots does it take to screw in a table leg?”

Words don’t really do it justice, so check out the video below to get an idea of how it works. Skip to somewhere around the two minute mark to see it in action.

The hardware is pretty impressive, but in all honesty the software is where the magic happens. To begin, the only thing the bots are given is a set of CAD files that describe the furniture in terms of geometry, number of parts, screw holes locations. From there, they use a custom object-oriented symbolic planning system to figure out how the pieces fit together – without actually knowing what the finished furniture will look like. Aside from the CAD files, all the bots know is that every screw hole should be used and that no parts should be left over. Amazingly, even with such simple rules, the bots almost always end up with the right configuration .

Unfortunately, the project is far from being commercially available, but let’s not kid ourselves here – if you’re buying furniture at IKEA, chances are you can’t afford a pair of 20,000-dollar autonomous robots to assemble it for you. For now, you’ll have to build stuff the old fashioned way: on your knees, with the instructions in the wastebasket. But if you’re patient, I’m sure we’ll have these badboys at our disposal in just a couple years.

Exoskeletons with autopilot: A peek at the near future of wearable robotics
They strapped a paintball gun onto a Spot robot. Now the internet has the reins
Smart dummies: How robotic tackling tech is transforming football practice
The latest wild idea for space exploration? Robots made from hunks of ice
Three things the Microsoft Surface Duo 2 needs to succeed
Why are so few people actually using 5G in the U.S.? Here’s what the experts say
5G-enabled billboard in Times Square briefly brings interactive game to masses
Sustainable with Google 2021: Nest Renew, traffic light efficiency, and more
The 20 most outrageous and fantastic James Bond gadgets of all time
AirPods 3 could finally debut at Apple’s Unleashed event on October 18
Scientists think the next big solar storm could create an ‘internet apocalypse’
Need a last-minute Halloween costume? Check out these 3D-printable getups
Siduri Wines blends wine and tech in the ultimate sweepstakes experience