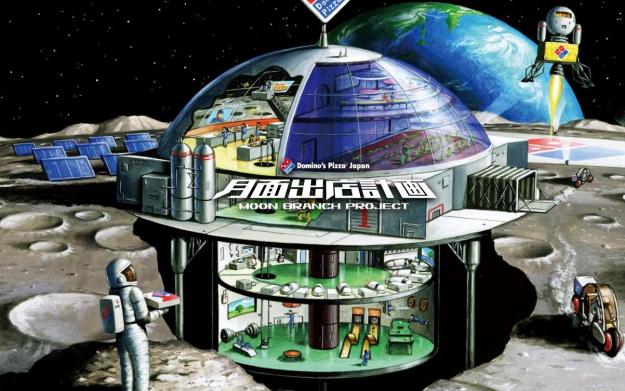 Yes, this is something real. Domino’s Japanese branch is proposing that the company prepare to sell pizzas on the moon. They want to build a dome shaped pizzeria in space in order to corner the market when people begin to live up there.

The construction firm Maeda Corp has already drawn up plans for the moon restaurant. The Japan Domino’s branch believes the project will cost  ¥1.67 trillion, or $21.74 billion in entirety to build. $7.3 billion has been projected  just to get the 70 tons of construction materials and restaurant equipment onto the moon’s surface using approximately 15 rockets.

The designs depict a two-story dome, 26 meters in diameter with a basement. There will be a drive through for moon residents to grab pizza on the go riding moon-motorcycles. Staff will live on the premises; there will be a playroom, a workout room and more. The plans involve cutting down costs by using “mineral deposits on the moon” to create concrete for the building. The pizzeria will also grow its own veggie materials in space using LED lights.

“We started thinking about the project last year, although we have not yet determined when the restaurant might open,” spokesman Tomohide Matsunaga told the Daily Telegraph. “In the future, we anticipate there will be many people living on the moon, astronauts who are working there and, in the future, citizens of the moon.”

The move isn’t the first pizza-related publicity stunt planned for space. In 2001 Domino’s competitor Pizza Hut delivered pizzas to an international space station. This isn’t the first Japanese dreamt space publicity stunt either; you may remember Sapporo brewing up some beer in space a few years back. They say good business is being able to predict the future–maybe Domino’s is on to something?