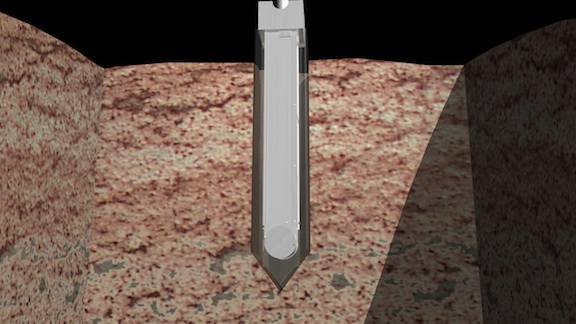 NASA wants to shoot for the stars, or at the very least, comets will do. Scientists at the Goddard Space Flight Center in Maryland are currently developing a space harpoon in order to siphon samples off of wayward comets.

The idea is that the harpoon will make collection safer and more efficient. Grabbing a sample off of a comet rotating at a 150,000 miles per hour is no cakewalk, especially when terrain is too rugged to land the spacecraft or if gravity is too low to whip out the shovels. With the new device, a spaceship would theoretically “rendezvous” with the comet, and while hovering above, launch the harpoon to grab test samples from wherever desired.

The scientists believe that these remnants from old solar systems could provide clues to the life here on Earth. NASA’s Stardust mission provided Amino acids from the comet Wild 2, helping to bolster the theory that a comet impact may have been the kickstarter Earth needed to start living.

The idea of the harpoon builds off of the European Space Agency’s Rosetta mission, which has a harpoon but no sample collecting capability. NASA’s harpoon launching ballista stands at least six feet tall, and is positioned towards the ground for safety reasons, as errant bolts have a range of 1 mile. The bow string is made of ½ inch thick steel, and once the winch pulls the string back, the ballista can generate up to 1,000 pounds of force. Future spaceships will ideally have multiple harpoons, which will be designed to handle different types of comet material.

Currently NASA is testing harpoon tips, firing at different speeds into materials like ice or rock salt. The project’s lead engineer, Donald Wegel, said, “We’re not sure what we’ll encounter on the comet…so we need to design a harpoon that’s capable of penetrating a reasonable range of materials.”

The project is still in its early stages, as the team has yet to apply for funding, but hopefully it will lead to better samples and understanding of the foreign bodies.

We’re going to the red planet! All the past, present, and future missions to Mars