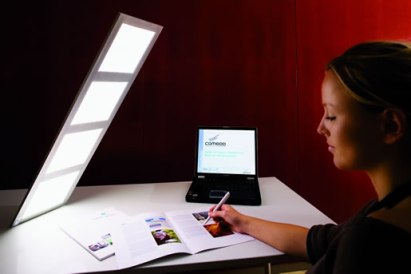 OLED is a known technology for many technology enthusiasts and is most common in displays. OLED tech also has other uses, one of which is for lighting indoors that is more energy efficient than the current light sources in wide use today.

Researchers at the National Tsing-Hua University in Taiwan — J.H. Jou and his graduate students — have made a significant breakthrough in the design of indoor lighting using OLED panels. The researchers have been able to devise OLED panels that can accurately mimic sunlight and can simulate the phases of the sun from dusk until dawn.

The OLED panels may one day be useful for indoor lighting that is easier on the human eye and saves energy; thereby reducing greenhouse gasses produced from making electricity. The development by the team of researchers enables a white-light OLED panel to emit the same light wavelengths as natural sunlight. This is accomplished by varying the voltage to the panel.

Jou said, “By varying the voltage through the OLED panel from three to nine volts can produce ambient light simulating natural light that changes from dawn to dusk. Truly there is genius in simplicity as this plain driver-IC can automatically modulate the voltage to render any desired color temperature between 2200 and 8000 K anytime.”

The OLED panel emits light via electroluminescence. The panel has a voltage applied across the electrodes to motivate the electrons in the semiconducting layer near the panels cathode. The electrons are then released near the anode and leave behind positively charged holes and the electrons can then fill these holes and emit photos that produce light.

LEDs are currently being used for indoor lighting, but the OLED technology promises to be thinner and consume less power. OLED lighting is already available from Lumiotech. The company is the only global supplier of OLED lighting, but its lights produce only one wavelength of light that is akin to sunlight on a cloudy day.

According to the researchers, OLED lighting may be ten times more energy efficient than current incandescent lights and as  much as three times more efficient than currently used CCFL lighting. Research on OLEDs for lighting has been underway for years and the lumens of light produced per watt have increased significantly over the years. OLED light panels are expected to produce 50 lumens per watt in 2011. Much research is going into OLED panels for lighting and other uses.

In July of 2008, researchers made a breakthrough that led to brighter OLED panels producing 70 lumens per watt.

ISS gets a new research platform, Bartolomeo, attached to its exterior