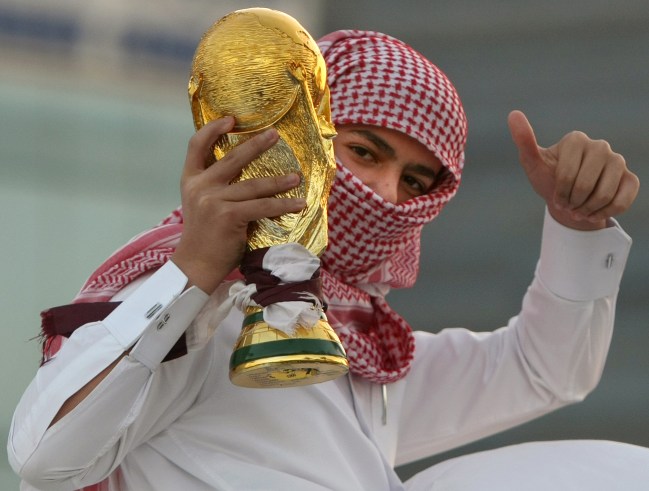 When it was announced that the small Middle Eastern country of Qatar would play host to the 2022 World Cup, a few problems–or “challenges” as they are called in the corporate world–quickly sprang to mind. The nation is home to just 1.7 million souls, while the last World Cup alone brought over 370,000 people to South Africa, which presents a bit of a problem. Qatar’s infrastructure isn’t very large as 80-percent of the entire population all live in the capital city of Doha, the majority of the country is uninhabited desert, and the majority of accommodations  for tourists and stadiums to play the games will need to be built from the ground up. Then there is the judicial system, which when not extremely busy actively turning a blind eye to repeated claims of human rights violations, is based on a combination of Islamic and civil law codes, which will be hard pressed to accept traditional soccer–sorry football–hooliganism with the same good natured attitude that South African police did when they would give rowdy incoming fans a commemorative beating before deporting them on their merry way.

But beyond the many issues with the actual logistics that Qatar may face, most of these challenges can be overcome thanks to the ace up Qatar’s sleeve—a whole lot of money. One of the earliest members of OPEC, Qatar will likely be able to afford to build enough structures to accommodate all (or at least most) of the incoming visitors, and building stadiums to house the games is standard practice for many host countries–even if Qatar needs to build more from scratch than most. The laws can be relaxed for a brief period of time as well, and Doha and the other cities of Qatar have 11-years to prepare for the invasion. But there is one problem that may create issues that cannot be solved with money.

Qatar is hot. It is very, very hot.

In June and July when the World Cup will be played, the average high temperatures are likely to reach around 115-degrees during the day (with highs of over 120-degrees not uncommon), and the average low in July is still a balmy 81-degrees Fahrenheit. But at least there is still precipitation to occasionally cool the country down, right? Not even a little.

From June through October, the average amount of precipitation is 0. Not even 0.1, but just plain 0, making it arguably the easiest place in the world to practice meteorology. If there could be a negative amount of precipitation for a country, if one area of land could actually suck precipitation away from people and objects, then Qatar would. So what better place to host a grueling sporting event that physically taxes the players to the breaking point by making them run continually in the sun for two 45-minute stretches? More importantly though, with every game covered by dozens of cameras and broadcast all around the world, will people want to suffer the heat to watch the games in person?

With that in mind, the government of Qatar has teamed up with scientists at Qatar University and show the sun who is boss.

There will be very little shade in the stadiums where games are played, and the brutal heat of a summer in a desert does not exactly sound like an ideal vacation—what with the very real possibility of death from heatstroke as people unaccustomed to the heat sit outside in temperatures hot enough cook an egg for hours at a time without moving. But hey, at least there is very little water, which means that the cost of bottled water is likely to hit obscene levels when the wide eyed, and heat stroked visitors begin to flood in, which will undoubtedly increase dehydration concerns. So the scientists decided to take matters into their own hands and defy the laws of nature. What could possibly go wrong?

According to BBC Sports who originally reported the story, the proposal is to create artificial clouds to stop the sun’s unprovoked attack on the poor, innocent pigment of pasty travelers. The plan to take back the skies stems from the head of the mechanical and industrial engineering department at Qatar University, Saud Abdul Ghani. His idea is to create a shield of sorts that will be kept aloft using helium, while being remote controlled from the ground to move with the sun. The shield will be constructed of light weight carbon fiber that will be flat, rather than curved as most helium-inflated blimps are. The flat surface will act as a solar receptor, which in turn will power the four engines keeping the rig in the air. The entire shield would be large enough to cover the field and the stands.

These cyber-clouds would be used in conjunction with several cooling systems on the ground. Brand new, state-of-the-art air-conditioning units will be standard in all the stadiums, and solar panels on the roof of each building will power the systems.

There are just two minor problems with the plan.

First, these robo-clouds would cost around $500,000. Each. Qatar is one of the richest nations around thanks to the wealth of oil in the area, but even they must be somewhat hesitant to shell out half a million dollars to accommodate tourists travelling to environments that many of them will consider brutal and hellish, while locals will just consider it summer. But the second, and slightly more problematic issue is that these artificial clouds have not been created yet. The technology just doesn’t exist. Although there is still a healthy 11-year research and development window until 2022 and the technology can reasonably be created (specifically the solar panels), but the price tag may discourage the idea. The solar powered air-conditioning for the stadiums is also still just something on the drawing board.

The other, apparently far more radical idea than creating artificial solar powered clouds that would block the sun like Mr. Burns once did in The Simpsons, is to move the World Cup to the winter when the average temperatures are typically in the mid-70s, with lows in the 50s. This, of course, was quickly rejected as being ridiculous, and FIFA president Sepp Blatter has confirmed that the games will proceed in the summer.

Despite being rated as a “high operational risk”, Qatar beat out four other nations for the rights to host the 2022 World Cup, including Australia, Japan, South Korea and the United States. But even with the logistical nightmare, the lack of infrastructure, the questionable human rights, frequent reports of people being trapped into involuntary servitude, not to mention the potential viral videos waiting to be born when Qatar’s very tenuous tolerance of alcohol is pushed to the breaking point as thousands of fans chant their team songs followed by a traditional getting extremely drunk, at least they have artificial robotic clouds. Take that, sun.