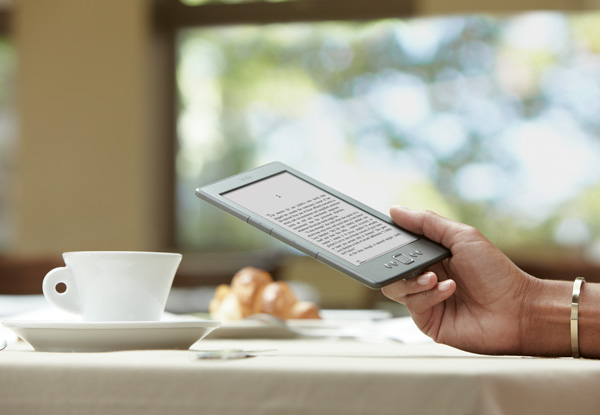 Amazon has long been heralded as the enemy of the brick-and-mortar bookstore, offering consumers a huge selection of titles via mail order at prices even the largest booksellers have trouble matching. Over time, Amazon expanded its online marketplace horizontally, adding clothing, groceries, computers, games, tech, tools, and myriad other products to its online shelves. But, with the Kindle, the company came back to its roots as a bookseller and launched a new ecosystem of electronic books. Kindle e-books have proven very popular, with the likes of Barnes & Noble and Apple jumping into the e-book business and Amazon noting at the beginning of the year that Kindle e-books are even outselling paperbacks.

With the Kindle, Amazon expanded into self-publishing for would-be authors. Instead of having to spend a few thousand dollars to receive a load of cardboard boxes from a vanity press, authors can offer their work directly on the Amazon marketplace, and customers can get electronic copies or, if they like, order a print-on-demand version via Amazon-owned CreateSpace. More recently, Amazon started bringing out its own e-books, with a standout example being The Hangman’s Daughter, a historical novel in German from first-time author Oliver Pötzsch. Amazon bought the rights, paid to have it translated from the German, and has since sold more than a quarter million digital copies. Houghton Mifflin Harcourt began offering a trade paperback of the novel earlier this year.

Now, Amazon looks to be taking the idea one step further: The company is working with authors that would normally be the exclusive realm of traditional publishers. The company has inked a deal with self-help author Tim Ferris, announced a deal with director-actor Penny Marshall for a memoir (complete with a reported $800,000 signing bonus), and announced it will be launching its own genre imprint dubbed 47North with titles from established authors like Neal Stephenson and Greg Bear. Amazon’s in-house publishing efforts are being led by agent and former publisher Laurence J. Kirshbaum, and, according to the New York Times, the company plans to bring out more than 120 titles this fall alone.

Is Amazon championing the little guy here, cutting out the middle man and democratizing the publishing process? Or is the company primarily concerned with cutting publishers out of the loop so it can make more money on digital sales?

The problem with e-books

In principle, e-books seem like a fabulous thing: Avid readers can literally carry around a library of thousands of titles in their pockets, back them up to their computers, and read them on inexpensive, highly-portable devices that often have battery life measured in months. Want another title? No problem: Lots of readers can buy titles online, or (sometimes) check them out of libraries. Even at the most basic level, e-books are an experience that would have been pure science fiction a couple generations ago.

However, like the music industry before it, the existing publishing industry has had difficulty adapting to the digital revolution. For music publishers, the initial perceived enemy was piracy; for book publishers, it’s distribution channels — and Amazon is the 800-pound gorilla in the room. In its effort to popularize the Kindle, Amazon initially took the approach that e-book pricing for new releases and best-sellers should start at $9.99. The idea was to jump-start the industry by offering a discount off mainstream pricing for the perceived downsides and consumer hesitancy over e-books. After all, who knows if Kindles will be around in a decade, or whether e-books you buy today will work on tomorrow’s devices? However, publishers felt the $9.99 pricing devalued their top-selling titles, so they banded together and forced Amazon to agree to an agency-pricing model, with new releases and best-sellers routinely going for $12.99 to $14.99. In part, this was due to a new player in the e-book scene — Apple’s iBookstore — but it was also publishers protecting their turf, maximizing revenues on popular releases the same way the music industry (eventually) forced Apple to accept differentiated music pricing in iTunes — with hot hits being more expensive.

The result today is that ebooks aren’t necessarily cheaper than physical books — even from Amazon. The top hardcover entries on the New York Times best-seller list are often a bit less expensive as e-books, but trade paperbacks and even hardcover editions of many popular and best-selling titles are available in bookstores (and usually from Amazon itself) at prices matching or beating their Kindle equivalents. Looking for a copy of The Help by Kathryn Stockett? Amazon’s Kindle edition is $9.99, but trade paperback versions are $9.60. How about Killing Lincoln from conservative commentator Bill O’Reilly? It’s $12.99 on Kindle, $15.40 for a new hardcover—it’s not available in paperback yet. Shock Wave by John Sandford? The Kindle edition is $12.99, hardcover $15.98, no paperback versions yet — but other online sellers are offering the hardcover for $12.50. How about The Girl with the Dragon Tattoo, the title that took off with the Kindle? It’s $9.99 for Kindle, $9.73 for trade paperback, and $7.99 for a mass-market paperback… and I recently saw a pristine trade paperback copy at a used book store for $2.00.

So, sure, e-books might be science-fictional, but they aren’t necessarily any less expensive than buying physical books, particularly for readers who don’t need to have first-edition hardbacks of popular releases. And, medium- and long-term, that’s going to limit consumers’ adoption of e-books.

So, Amazon’s move to publish its own best-selling books can be seen not only as a way to do an end-run around traditional publisher, but also pump new energy into its e-book business. Amazon won’t have to match publishers’ agency pricing models with its own titles: It’ll be able to offer its own titles at its original $9.99 price point, or even lower. And if Amazon can hit a home run or two with a few of its own titles, it may be able to convince traditional publishers that their agency pricing model — and the near-hardcover prices for e-books — may not be the best idea.

Amazon is looking for those home runs. The company has inked deals with popular self-help writer Tim Ferriss (who wrote The 4-Hour Workweek and The 4-Hour Body) and lined up Barry Eisler, who notably turned down a lucrative two-book deal in favor of self-publishing, then decided to go with Amazon instead. And if you look at the pricing for Eisler’s books, you find the Kindle edition is $5.99 and the trade paperback (due out tomorrow) is priced $8.88 — pricing that eschews traditional publishers’ view of the world. With a Penny Marshall memoir on the way and major names attached to its 47North genre imprint — Dave Duncan, Greg Bear, and Neal Stephenson are particularly appealing to the tech-savvy crowd — Amazon will be competing directly with major publishing houses. And not just in the e-book market: Amazon plans to bring at least the 47North titles to readers in audiobook and print formats too, both on its own virtual shelves and via national and independent booksellers. The bookstore down the street may soon feature Amazon titles alongside Harper Collins and Macmillan.

These moves into traditional publishing have Amazon going mano-a-mano with legacy publishers, but at the same time the company’s self-publishing operations may be cutting them off at the knees. Although Amazon’s Kindle self-publishing has seen a lot of crap  —and a lot of spam — it’s also had some notable successes, particularly with writers like Amanda Hocking, J.A. Konrath, and John Locke. In Amazon’s self-publishing system, authors keep 70 percent of the revenues generated from their titles. Sure, they don’t get the advance that accompanies a traditional book deal, but for most authors, that advance is the biggest check they’ll ever see for a book — and (sometimes thanks to the industry’s famously obtuse accounting) most book titles don’t earn back enough on their advance for authors to ever see royalties. Earning 70 percent off every sale, even with no advance, can be a tempting proposition for a prolific author.

How Amazon can lose

Aside from weeding out spam and preventing piracy, Amazon isn’t going to do much policing of the self-publishing marketplace. Instead, the company will rely on much-vaunted crowdsourcing and let the cream rise to the top. Of course, one downside of crowdsourcing as a quality measure is that it is easily exploited by pandering — the long legs and high heels on John Locke’s titles undoubtedly benefit from people judging a book by its JPEG — erm, cover.

Amazon may lack something traditional publishers have cultivated for generations when it comes to best-selling titles: editorial depth. There are a exceptions, but it’s no secret that most books written by celebrities benefit substantially from publishers’ in-house editorial help, whether that be a development editor sweating the details and helping the author shape the material,or copy editors ensuring the quality of the manuscript, or even bringing in researchers and ghostwriters to produce the book. Traditional publishers’ editorial expertise also helps even established writers look their best. Ghost writers aren’t anywhere near as common, but nearly every award-winning writer (fiction or non-fiction) will acknowledge debts to an editor (or editors) who helped significantly improve their work. Amazon has undoubtedly assembled editorial staff to bring its own titles to market, but we’ve yet to see the quality of the end results. The bottom line is that if Amazon wants to compete with legacy publishers at their own game, it has to produce content that’s in the same league.

Legacy publishers are also expert in their markets. They know how to market and advertise new titles, how to schedule releases to maximize revenue, and when footing the bill for author appearances and tours might be the right thing to do. There’s no question Amazon knows how to market successfully in the online world, and its long experience as a bookseller no doubt gives it insight into marketing books. But only time will tell if Amazon, on its own, can make a quality book into a mass market success.

Disruption, thy name is Amazon

If Amazon can bring competitive titles to market, traditional publishers will have to re-examine not just their relationship with Amazon’s e-book business (and how they price ebooks relatively to hardcovers and paperbacks), but also how they deal with authors. Legacy publishers will have to carefully consider how they can attract (and retain) top-quality and best-selling authors. That may mean giving them a bigger slice of revenue, letting them have more control or approval over marketing and packaging, or opening up new doors for beginning writers — programs that have low up-front costs for the publishers, but reward authors who can touch a nerve with the reading public. Otherwise, Amazon’s value proposition to authors is going to get more and more attractive, and Amazon will wield even greater power over the publishing industry.

Topics
K-pop NFTs are here, but I’m not convinced they’re worth it
Solving VR’s ‘infinite walking’ problem with moon boots
Fighting football injuries with 3D-printed, hyper-personalized pads
Inside the U.K. lab that connects brains to quantum computers
ClipDart is an on-demand barber app aimed at people of color
How 5G is changing journalism
Why the moon needs a space traffic control system
10 female inventors who changed the world forever
The most influential women in tech history
Analog A.I.? It sounds crazy, but it might be the future
Finishing touch: How scientists are giving robots humanlike tactile senses
Tiger steaks and lion burgers: Lab-grown exotic animal meat is on the way
Implantable payment chips: The future, or cyberpunk pipe dream?