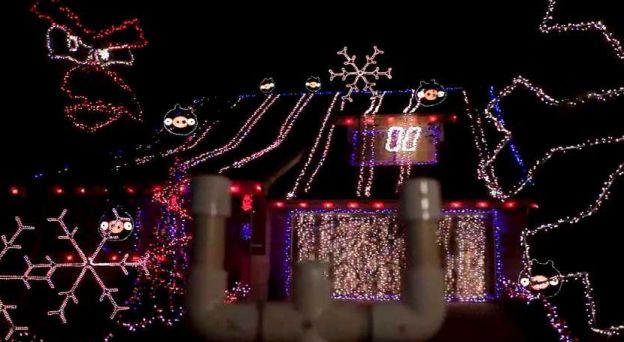 Every year around this time, we’re treated to lots of video featuring creative — and occasionally interactive — displays of Christmas lights that amaze, astound, and usually make our own measly decorations look, well… somewhat uninspired.

It’s okay, though — because we’re pretty sure we’d never be able to do what Ric Turner did with his holiday lights this year (or any previous years, for that matter). The former special effects specialist with Disney Imagineering not only created an Angry Birds-themed light show that encompasses much of his home and yard, but he went the extra mile and actually made it playable.

The display runs on a pair of computers and is made up of more than 20,000 lights. Audio for the display is broadcast on the 99.1 FM channel, so gawkers can tune in for the full effect.

As for the playable aspect of the display, Turner created a slingshot-shaped controller with three buttons that allows you to direct your shot at the loathsome, Christmas-ruining pigs. Which button you press and how long you press it determines the direction and height of the shot.

Sure makes that plastic reindeer on your lawn seem kind of weak, eh?

The 17 best tech gifts for the whole family