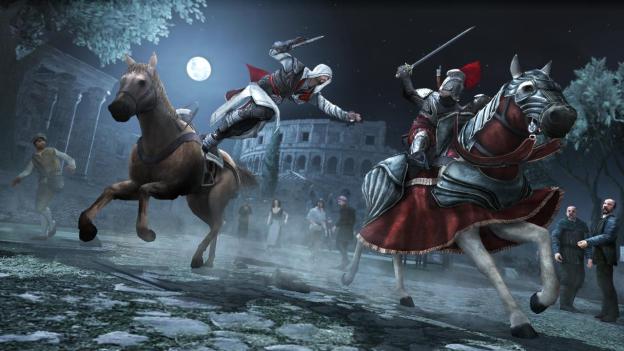 Consider this article to have a big ol’ asterisk by it, as it is still undeniably in the realm of rumor and unconfirmed reports. But even if it is not true, it is still fun for gamers to get together, imagine new and exotic worlds, then picture an assassin stabbing someone to death in them. It is like history come to life!

The website Empire State Gamer has posted an image from a poll that a tipster forwarded on to them, which (among other questions) asks which of eight potential historic times and locations, gamers would like “one of the next Assassin’s Creed games to take place.”

For the skeptics in the crowd, there are a lot of alarm bells in this. First, it is from an unnamed source. Second, the source claims to have received a marketing survey with the loaded questions, but does not go into further details, like who specifically sent it or why that person received it. If it is just an explorative email from Ubisoft, why not send it to all registered Ubisoft members just to get people talking? Third, Empire State Gamer also emphasizes that should be considered a rumor.

All that said, the choices offered are intriguing and good for a bit of hypothesizing and guesswork. There is a very good chance that Ubisoft may send out numerous polls like this, even if they never use the results. It’s always good to know what the fans would most appreciate, and each of the eight choices would potentially make for a solid game. The choices are:

The Assassin’s Creed series is due for a shakeup in the next year. Assassin’s Creed: Revelations ends the stories for both Altair and Ezio, and Desmond is heading for a climactic showdown to stop the Templars plans that culminate in 2012. Whether Desmond’s story continues past 2012 is unclear, but the franchise will live on regardless.

It is also unclear where and when the next game will be set. It is confirmed for 2012 and it will have a heavy focus on the current Templar plot, but that is all we know so far. It is possible that the series will only feature Desmond in the present time setting, but that seems unlikely due to the success the historical fictions have been for the series.

Assassin’s Creed: Revelation just hit stores earlier this month, but it is never too early to talk about future games. The next game game in the series is set for next year—likely a November release—but the setting for that game must have been determined quite a while back to give the developers time to work. But in the meantime, where would you like to see the franchise go?

Roller Champions is not shutting down, contrary to rumors

The next Assassin’s Creed game reportedly delayed to spring 2023