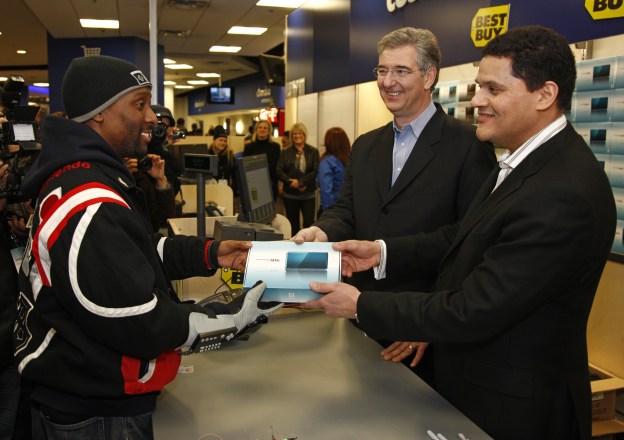 Nintendo President Satoru Iwata must be breathing a sigh of relief. After a tough start for the Nintendo 3DS, the handheld hardware is showing steady growth, and is currently the most purchased piece of gaming hardware in Japan.

Following the release of the 3DS in Japan, the sales were encouraging. The device sold out 400,000 units, and despite slow software sales, things were looking good. Then the sales flatlined and it soon became apparent that longtime Nintendo fans were willing to try the new hardware, but it was not reaching the wider audiences that Nintendo had hoped for. So then came the price cuts.

Originally debuting at $249, the 3DS’ price was then cut 30-percent to $170, effective August 12. It attracted plenty of new fans, but also enraged those that paid the full price. Many felt that Nintendo was punishing them for their loyalty, something Iwata took very seriously. Iwata issued a personal apology to those fans, and offered them the Ambassador Program, featuring 20 Game Boy Advance and original NES games for free. The results were almost instant. 3DS sales exploded in Japan and Nintendo sold more than 215,000 units in a week—a steep increase from the 30,000 or so it was selling per week prior to that. The results were seen in North America too, where despite a major drop in industry sales in general, the 3DS saw a 260-percent increase.

A month later the sales seem to be remaining constantly strong, especially in Japan where the 3DS sold 58,837 units and led the week in hardware sales, according to figures compiled by Media Create and shared through Gamesindutry.biz. This isn’t the first time that the 3DS has been at the top, but it is the first time that it took the top spot without the benefit of having just launched, or the recent price drop. The sales appear to be steady, which is good news for Nintendo.

It is also somewhat telling that even with good hardware sales, the 3DS’ software sales are still suffering. With only one title in the top 10, The Legend of Zelda: Ocarina of Time 3D (which is a remake to begin with), Nintendo must be concerned.

But there is good news on the horizon. Several major titles are due soon for the 3DS, including Super Mario 3D Land and Mario Kart 7. With the 3DS’ internal software finally caught up (Netflix is active, the e-Store is finally ramping up, etc.), the price at a point that people are accepting it and a handful of major titles on the way, the 3DS might finally have found its groove.