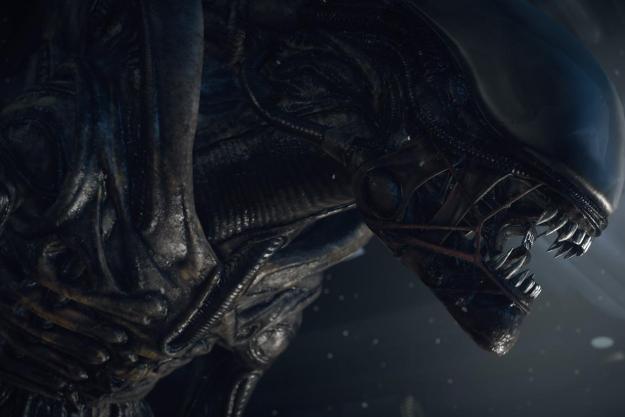 “[Alien Isolation] is a remarkable work fueled by fearful tension and exhausting stress.”

The director of 1979’s Alien was explaining why the H.R. Giger designed Xenomorph would not appear in series offshoot Prometheus 2. “I think it wears out a little bit. There’s only so much snarling you can do. I think you’ve got to come back with something more interesting.” Clearly Scott has never spent two minutes hiding underneath a desk in Isolation‘s brutalized space station, hoping the beast doesn’t spot, smell, or hear you breathing.

The stomping monstrosity is anything but cooked; it’s a primal and disturbing force, as much as it’s ever. Here, it’s not hunting a bunch of space truckers. It’s hunting you, and the effect is discomfortingly real. When that single animal is the driving force behind the Creative Assembly’s game, it’s a remarkable work fueled by fearful tension and exhausting stress. Unfortunately there’s a hidden passenger inside the good game; the parasitic second half of Isolation almost kills its brilliant first when it slithers out of what should be an affecting climax.

The parasitic second half of Isolation almost kills its brilliant first when it slithers out of what should be an affecting climax.

In another universe where James Cameron never came up with cargo loaders, this game could have been called Alien 2. The Ghostbusters 2 philosophy of sequel-making is at work in Isolation: do the same thing again, but bigger. Ridley Scott’s movie is mimicked on every level, from the design of Sevastopol space station’s minimalist hallways and steamy industrial works to the actual story beats. It even stars a young woman named Ripley; daughter of the original’s hero, now desperate to find out what happened to her mom 15 years after her spaceship disappeared.

Instead of just being trapped on a single ship as Ellen and her crew were, Amanda has to traverse an entire space station haunted by this seemingly invincible two-mouthed freak. More air duct crawling! More motion tracker staring! More murderous androids, more shock appearances of the alien, and a whole lot more potential victims!

Unlike most bigger-equals-better sequels, though, Isolation works brilliantly at first. Amanda’s journey into Sevastopol is brilliantly paced for maximum suspense, carefully crafted in a way to needle panic centers in new audiences and series obsessives alike.

Patiently thrusting you into a dire situation, the game acclimates you slowly while gradually ratcheting up the tension. The alien’s going to show up at some point; it’s right there in the title! In the meantime, you’re guided through hallways, learning how to hide in lockers, under furniture, and in painfully dark air ducts, as well as using Amanda’s engineering skills to cobble together tools like flash bangs, noise makers, and Molotov cocktails to distract threats.

Hiding from people comes first in Isolation, and they’re good training wheels because these people are dumb as bricks. Sevastopol and the squirrelly Seegson “Working Joe” androids manufactured there are well-made game pieces, but the human AI in Isolation is distractingly terrible.

You might brain a gun-toting looter with Amanda’s wrench just as his friends arrive to investigate, and they’ll never spot you. But these are also the same enemies that can seemingly detect you from 50 feet away and through walls. Ripley does get a gun, a few of them in fact, but using them isn’t recommended. Not only does the noise rustle up the alien; hit detection is also a real problem in Isolation. Wrench strikes, bullets, and taser hits will simply pass through people and androids if they’re in the midst of specific animations.

In a place as convincingly real and menacing as Sevastopol, these elements could be infuriating, were it not for the fact that avoiding conflict is paramount. Human enemies are scarce in later parts of the game, so their blithering idiocy doesn’t cause problems (and in many cases comes in handy with the big guy). Plus, Isolation‘s addictive, cruel pacing is at its best when you’re trying to move quickly and quietly to the next save point.

There are no mid-chapter checkpoints here, no automatic restarts from where you picked up that crucial keycard or turned on that generator. Saving your game can only be done at emergency call boxes placed just far enough away from each other to make you frantic and cunning, willing to take big, thrilling risks. Dying and restarting, trying to get through cramped but expertly laid out areas, is a central activity in Isolation and it is awesome.

Unpredictable in the best way, the alien tromps down hallways, skitters through the walls, and waits silently for you to approach open airways.

The alien is what makes it awesome. When it finally appears in full and starts stalking you through Sevastopol, it outclasses every other monster. Near the end of the game’s first third, you’re trapped with it in the station’s ruined medical wing, constantly shuffling between different areas trying to find supplies for an injured colleague. Unpredictable in the best way, the alien tromps down hallways, skitters through the walls, and waits silently for you to approach open airways.

The rote practice of stealth games like Metal Gear Solid is as useless an approach here as the run-away-forever tactics of survival horror like Amnesia and classic Resident Evil. The alien has to be avoided and distracted with your meager supplies, but every time it finds you — in a closet, under an upturned gurney, or walking across a hall too slowly — it offs you terribly and you have to start again, smarter. The Creative Assembly has bottled the dizzying alarm of the movie’s characters, and sustains it over a remarkable period of time with well-paced breaks and brief, effective storytelling.

The hunt evolves following that hospital chapter, with Isolation both expanding the alien’s presence throughout the station while also providing you with new tools to steer it and gain a modicum of control. It both raises your confidence in Sevastopol as well as the stakes of its threat, creating a closer bond between player and Ripley than any of the game’s meager dialogue does. It all culminates in a mad, cramped attempt to trap the monster that echoes the conclusion of the original movie without outright aping it. After around 10 hours, the tension and feeling of accomplishment build with geyser pressure until a final, brilliant confrontation.

And then the game goes on for another seven hours of mindless, needless story that ranges from boring to outright broken.

Why Creative Assembly decided to continue on from what is a clear climax is baffling. The focus turns to the game’s B-plot, about the station’s androids, exploring it in irritating detail. For a couple of hours after that definitive moment in the game, Amanda doesn’t do much of anything besides walk down hallways and pull levers to open doors or reroute power.

Forced to go through the motions, dodging the infrequently threatening androids is irritating. And worse, when the game finally does reintroduce the alien threat, all that delicious anxiety has dissipated. As if all that’s not enough, combat is also forced here into a game that can’t properly accommodate it. You’re managing new enemies, ones that are nearly impossible to see and harder to hit. They can kill you in seconds, and they’re everywhere. Suddenly, the problematic but forgivable issues with shoddy weapons, AI, and collision between objects become impossible to ignore.

One after another, the game throws out false ending after false ending, diverting you to environments that lack the ingeniously cluttered complexity of earlier sections, only to knock you down again. All of that very real emotion developed in Isolation’s first half is replaced by a deadening monotony. When everything is extreme, as it during the final three hours of the game, the subtle interplay of fear and safety that is Alien: Isolation‘s greatest strength disappears completely.

The beast is still powerful after all these years, all the more so when it’s on its lonesome, an unknowable destroyer stalking your every move. The Creative Assembly’s game, however, is cooked; left to boil so long it loses all flavor and texture. For 10 hours, Isolation is one of the best horror games ever made, until a second, poorly made game bursts out of its heart.

This game was reviewed on a Windows PC using a Steam code provided by Sega.