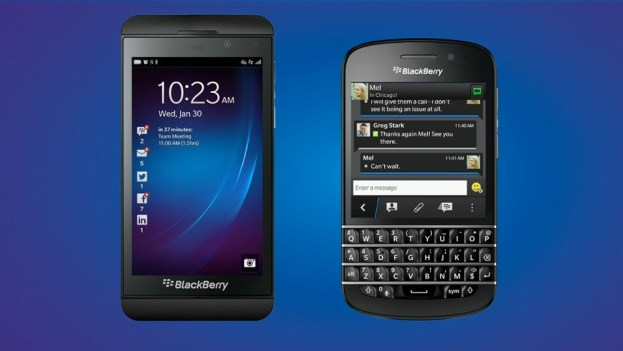 The times, they are a changing.’ It wasn’t all that long ago that RIM (now operating under the name BlackBerry) was the handheld device for business, and only business. The Canadian-based telecommunications company seemed to be perfectly content to control the enterprise side of things while Apple and Android battle over the average consumer. But then a funny thing happened on the way to controlling the market.

Where five years ago RIM was standing atop the smartphone world, it has since fallen to the combined market assault of its competitors and gone from leader to a distant third.

There are many reasons for this, but the obvious one is that RIM painted itself into a corner. Its reliance on business customers gave Apple and Android makers a wide open field to expand into. Once they were established, also appealing to business users was an easy step, especially as both Apple and Android continued to nurture their own software for home and businesses. RIM on the other hand, has had a tougher time of going the other way and appealing to the average smartphone user who may be interested in the handset for business, but only as a part of the overall experience.

Part of that overall experience includes games, something that RIM has never really been big on, to say the least. So it is something of a surprise to see BlackBerry at GDC, appealing to game developers to check out the new BlackBerry 10. So why the change of heart?

Hirsch and BlackBerry know which way the proverbial wind is blowing. The days of trying to appeal to a single market and still retain a healthy market share are over, especially when it comes to electronic devices. Manufacturers like Apple, Samsung, and HTC make phones that offer something for everyone, whether that person is into business features, media apps, games, or more likely, all of the above. Phones and tablets need to be powerful and efficient, and they need to do everything.

The BlackBerry 10 is a powerful device, powerful enough to attract mobile gaming  developers that have helped to push the technology forward. And beyond the power of the hardware and OS – which is at least comparable to other smartphones in general terms – the code is clean and simple, which makes it easy for developers to work with it and add to their own games thanks to the functionality of the OS.

For example, the new OS has the ability to add in BlueTooth gamepads. Other devices have the option to use some game peripherals, but it is usually a difficult process to adapt – or at least one that takes time. BlackBerry has the ability to use console quality gamepads with minimal fuss. That helps convince developers that BlackBerry has something to offer that others may not. At the very least, there is no reason not to work with the company.

The goal is to re-introduce BlackBerry as a flexible device that anyone can use. When the new OS launched, it contained 70,000 apps. Of those, more than 30-percent were games. But will it be enough to change the image?  After the release of the BlackBery 10, BlackBerry’s subscriber base fell. It is far from being out of the competition, but it will need a major comeback to come anywhere near its earlier market dominance.

The ability to play most mobile games won’t win fans over on its own, but it will help. The biggest issue BlackBerry may face is that it has a perception problem among potential users. It needs to convince adopters that BlackBerry 10 is the complete package.

“It’s not only about games,” Hirsch said. “We have a very powerful package all round. And now it actually comprises the greatest games as well.”

Diablo Immortal on the iPhone SE is held back by one thing, but it’s not the screen