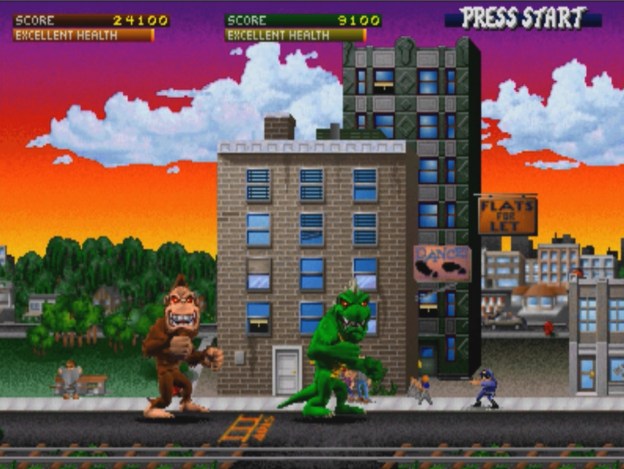 Well, one thing’s for sure about the news that classic ’80s video game Rampage is being adapted into a movie: it makes a lot more sense than Battleship.

New Line Cinema announced this week that it plans to adapt Midway Games’ popular monster mash-up into a feature film, with A Nightmare on Elm Street and Final Destination co-producer John Rickard producing the film and meeting with potential writers now.

In the game, players controlled one of three people transformed into giant monsters — an ape, a lizard, and a werewolf — as they destroy a city and fend off military attacks. In order to advance to the next level, players were required to smash buildings, eat civilians, and attack the helicopters, tanks, and other military vehicles trying to stop their, well… rampage.

The game spawned several sequels and spin-off titles, with the most recent being 2006’s Rampage: Total Destruction, released for the GameCube and PlayStation 2, and later ported to the Wii.

In the announcement of project at The Hollywood Reporter, it’s indicated that the studio plans to make a film inspired by the “title and the visuals of the game” in “the vein and tone of Ghostbusters and Independence Day” — which could mean a very loose adaptation at best.

But really, as long as there are giant monsters destroying things, will anyone really care?

Topics
With Valiant Hearts: Coming Home, Netflix finds its video game voice
The best video games of January 2023: Hi-Fi Rush, Dead Space, and more
The best iPad Pro games in 2023: the 26 best ones to play
7 PlayStation VR2 launch window games you’ll want to grab on day one
The best skills to inherit in Fire Emblem Engage
Dead Space: how to fix the centrifuge
How to fast travel in Forspoken
Star Wars Jedi: Survivor will now release in April following delay
How to get the Silver Card in Fire Emblem Engage
One Piece Odyssey’s great ending would have made for a perfect anime arc
Don’t need the Xbox Series X? The Xbox Series S is $50 off today
Tomb Raider returns as a mobile roguelike via Netflix
Samsung’s 49-inch Odyssey G9 gaming monitor is $600 off today