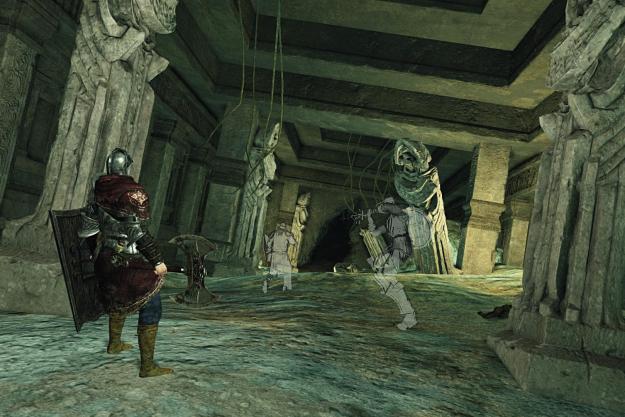 “From Software looks to the original Dark Souls for inspiration in the first of three announced expansions to Dark Souls II.”

The first expansion to From Software’s Dark Souls II wastes no time in reminding you of its pedigree. A yawning dragon greets you moments after you begin to descend the winding pathway to the dripping depths of Crown of the Sunken King’s aquamarine city, spreading its wings and swooping skyward in a fashion that should be familiar to fans of the previous games in the series. Later it reappears to harry enemies briefly on a long, narrow bridge, again like the dragons in Dark Souls and Demon’s Souls before it did.

But that dragon is far from the only way Sunken King recalls the days of earlier Souls games. This DLC is a full-fledged callback, from its intricate level design to its relentless pace and brutal difficulty. Even if you’ve mastered Dark Souls II by now, you should prepare to die at least a few times in this expansion.

This DLC is a full-fledged callback, from its intricate level design to its relentless pace and brutal difficulty.

The entrance to the formerly-sunken Sanctum City of Shulva is nestled neatly after the Black Gulch area of the main game, in a cave that always seemed like an odd dead end. If you didn’t know it was an expansion you might think it had always been there. Happening on a shrine—twin to another found elsewhere in the game—you’re transported to a peak above the city, blue and green temples arrayed far beneath you. You start to get that tingly feeling again. It’s a great opening.

In many ways this DLC is reminiscent of the original Dark Souls‘ single expansion, Artorias of the Abyss. Over the course of several hours you’ll make your way deeper and deeper into the city, searching desperately for bonfires (check every wall for illusions!) and eventually finding elevators that bring you all the way back up to the top.

The expansion covers roughly three new areas, and the layout of these new environments is satisfyingly complex. Whether you saw it as a flaw or simply different, Dark Souls 2‘s levels in general are more spread out and less interconnected than its predecessor’s, but the city of Shulva is as intricate as anything in the original. Glowing switches raise and lower platforms that help you get around, and hidden paths are locked behind doors that might take hours to locate keys for. Again, the Artorias content is a good comparison, though if anything Sunken King is bigger and more complex. It feels deliberate.

But the comparisons to the first game’s DLC aren’t all positive. Dark Souls fans have come to expect that the games’ stories and lore will be obscured, at least to a point; with an expansion, however, it’s best for the game to be up front about at least the basics of what’s going on. Otherwise the new content can feel too narratively disjointed compared to the rest of the game. Artorias is a perfect example of this: thanks to its forthright storytelling, you knew exactly where you were and what you were doing. Sunken King, on the other hand, has nary a cutscene or expository NPC, leaving you to piece some context together from the descriptions of the new equipment you’ll find.

There are several unique new items, usually with a twist that sets them apart. For example a giant mace poisons you a little every time you swing it, while a new crossbow fires hex-like bolts of magic. New rings deflect magic spells or raise your attack the lower your equip weight is. Between random enemy drops and story-critical items, there are tons of new weapons, rings, consumable items, and pieces of armor to find. And as a testament to From’s signature attention to detail, everything you discover looks like it’s been underwater for a few millennia. There’s an oceanic taint to the virtual air; you can almost taste the rancid salt.

There’s an oceanic taint to the virtual air; you can almost taste the rancid salt.

The same goes for the game’s new enemies, from crusty drowned soldiers to that big dragon itself, which spews poison in addition to fire. The DLC’s new foes are incredibly difficult to knock down and, even better/worse, there’s a ton of them. They’ll stab at you with salty spears and smash you with clubs, even as purple-clad mages fire spells from a distance. Some exude a gaseous miasma that poisons you when you get close; others, relentless wraiths, are impossible to strike until you’ve located and destroyed their physical tombs, sometimes several rooms away. These bastards are more than worthy of guarding the sunken king’s soggy temples and halls.

And there are just as many environmental hazards in Shulva. The city is littered with unexpected chasms, movable platforms, and spiked floors and walls. Oh, and remember those poison-shooting statues from The Gutter and Black Gulch? Shulva’s statues spit petrification instead, killing you instantly and reducing your max health even further than a normal death if you’re hit by too much. And naturally, these statues can now be found in clumps on the backs of turtle-like beasts that chase you around, albeit slowly.

Crown of the Sunken King adds several challenging boss fights as well. One optional fight that you may not even find your first time through even features some—yes, there are several—familiar-looking faces. The expansion ultimately feels somewhat anticlimactic; the lack of story context means you probably won’t be too sure what you’ve just accomplished, and the final encounter is so predictable it feels inevitable. But overall, From Software’s greatest strengths are on full display in the Sanctum City of Shulva, and fans will be counting the days until the next expansion is released before they’ve even reached the bottoms of this one’s murky depths. This game was reviewed on PC using a code provided by the publisher.

Where to find Ashes of War in Elden Ring

Dark Souls PC servers will be down until Elden Ring launches