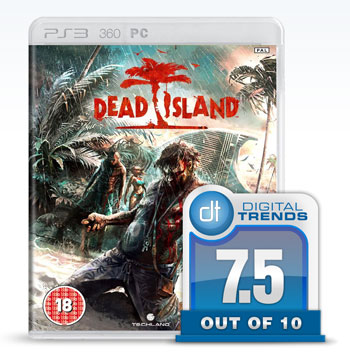 The rise of Dead Island began quickly and suddenly. One week it was a title in limbo that a few people vaguely recalled hearing about, mainly because developer Techland had lost its original publisher before landing at Deep Silver. It was a forgotten title with little to no buzz. Then came the uber-trailer, with the little CGI dead kid and sad music depicting a family having the worst vacation ever. The trailer was a viral hit, and suddenly Dead Island was a contender, even without a single shot of gameplay footage.

Then details began to drift out. The game didn’t sound bad, but walking around and beating zombies to death with a variety of weapons seemed a far cry from the haunting and mature look at a family dying tragically. Granted, it is way more fun to throw an electrified machete and hack-trocute the undead than watching a little girl die, but it was hard to nail down exactly what Techland was trying to give us.

Dead Island is a mixed bag of genres, including an RPG, thrown over a massive map with lots of quests and side missions. It is a melee combat game, but it also allows you to combine weapons into various objects. The obvious comparison is Dead Rising, and when you see the four player online, Left 4 Dead springs to mind. In play, it is a bit more like Borderlands, and even has elements similar to games like Deus Ex: Human Revolution.

When it works, Dead Island is a fun game that could easily develop a cult following that plays it constantly. The online integration is deftly handled, and the world is incredibly vast and fully populated with zombies. There are, however, also several problems with the game. Not enough to make it a bad game, but enough to hurt its mainstream appeal.

The story of Dead Island is not its strongest point. You choose one of four characters, each with his or her own backstory, but the real purpose of selecting a character is to choose the attributes you want to begin with. One is a brawler, another a firearms expert, one is strong in bladed weapons and the other is more balanced. Regardless of which character you choose, you are all stuck in the same place: Palms Resort on the South Pacific island of Banoi. And thar be zombies there.

The cause of the zombie infection is an ongoing mystery, and that aspect of the story is told through small hints that lead to larger reveals. But really, Dead Island isn’t about the overall story. The missions are mostly standalone, and the majority of quests and side quests are single events that you accomplish, then move on to the next with very little sense of progression in terms of story. There is some, but nothing that you will rush to do so you can see what comes next. If you are hoping for a deep plot, this is not the droid/game you are looking for.

The characters in the world are all seriously one-dimensional, and the occasional attempt to pump up the drama becomes almost laughable because of it. It becomes really hard to care about any of the “red shirt,” meals-on-feet characters that you will come across before you either move on or watch them get zombified.

The setting is the key above the story, and in that Dead Island succeeds. The island is massive and almost entirely explorable. From the beach to the island’s city, there is plenty to see and do, and there is no end to the undead, who will constantly be after you. In this, the game succeeds amazingly well. You can suddenly turn a corner and find five zombies ready to eat you. While you are deciding how to deal with them, five more may attack you from behind and send you running for your life, with the undead in tow. There isn’t much consequence to dying—just a short delay to respawn and a chunk of cash—but it can still get nerve-racking when you are overwhelmed. The deteriorating look of the island is also impressive to see as the infection spreads. It is dark and bleak, and cool to see devolve.

Where the game doesn’t do as well, where it flat out kinda sucks at times, is the mission variety—or lack thereof. The vast, vast, vast majority of the missions involve you being told to go somewhere and/or find something. Sometimes the game will mix it up a bit, but that’s about it. It becomes little more than an excuse to send you through zombie infested areas. It soon becomes repetitive and dull, and a little mission variety would have gone a long way. Not even a lot of mission variety, just some. But Dead Island isn’t about learning important lessons, or understanding the tragic nature of the undead. It is about taking objects you find and beating zombies to un-death with them.

If the simplistic nature of the objectives doesn’t scare you away, then there are a ton of missions to do. You can easily spend 30 hours playing Dead Island and not come close to finishing every side quest.

The Science of Curb-stomping a Zombie

I had to admit that I giggled a little the first time I stomped on a zombie’s head and heard a satisfying crack. I even smiled the twentieth time. Around the hundredth, the novelty wore of a bit. Like most RPG-style games, your enemies have hit points that you need to get through to kill them. When you first start, the zombies are all at low levels and aren’t particularly difficult to punch and kick to death, but they still take several hits, usually while on the ground. So basically, you hit the zombie to knock them down, then kick them, and kick them, and kick them again and again until they are dead. Repetition will soon become a familiar friend.

But that is just in the early going. As you progress, you will earn experience that gives you points, which you can spend on an ability tree. If, for example, you want Sam B—the brawler of the group—to be proficient with guns, you will need to wait quite a while and upgrade until he has that ability. If you would rather keep him as a brawler, you can spread out his points and increase his defense, while upping his damage with blunt weapons. It makes the characters you play feel individual and unique to each gamer’s tastes. The abilities are also fairly even, so there isn’t really one “right” way to level at first, as with so many other games like it.

The weapon customizations also make the combat much more interesting. Through the game you will earn various items that you can later assemble at certain locations, as long as you know what you are building. At first it will just be things like a bat with nails in it, but the more you pick up, the more interesting—and powerful–the weapons become. It takes some patience to get there, but eventually the combat becomes fun, and the gameplay becomes deep.

There are several technical limitations that put a curse on this game and drag it down. None is ever crippling, and many of the minor ones Techland is already hard at work fixing through patches, but some problems go beyond downloadable updates.

The enemy AI is dated. You don’t necessarily expect much from zombies in terms of strategy, but when one walks into a wall and keeps trying to walk through it, even as you bash its head in with a stick, there are issues. The zombie animations are also off, so while you may dodge a zombie punch, it may still register as having hit you. Little things like that pop up again and again, and just make the game feel like it needed a bit more time (or a lot more money) in development.

The graphics are also hit or miss. Sometimes they are amazing, other times there are issues with the textures, anti-aliasing and several other technical problems. The environments generally look good overall (although there are some exceptions), and the zombies look amazing. But many of the support characters and other online characters all look off, and the cutscenes can be distractingly bad. It doesn’t happen all the time, but enough to be an issue.

For all of Dead Island’s problems—the lackluster story, the dull missions, the inconsistent graphics—those become secondary to the best feature of Dead Island, the online play.

The single player game has its moments, but 30-hours of repetitive gameplay and dull missions can wear down even the most devoted fan. To really get the most of Dead Island, you need to play it online. When you are exploring a new section of the game, you will receive a notification about other players in the same area that are close to you in level. If you accept them, they will join you on your missions, and you can help them on their’s. If you want, you can each go off on your own but stay in the game together, and each play the single player with a live person playing in another section of the game.

Up to four players can join a single game, and thanks to the ability tree, even if everyone is the same character, they may each have their own abilities. If you don’t like the people you are with, you can easily drop out without consequence, and go looking for more people or just continue solo.

When you do have a full squad, Dead Island can be amazingly fun. The single player can be trying, but all the issues become minor distractions when you have four people, each working together while still completing their own goals. If you have a good crew of friends looking for a new online game, Dead Island is a definite possibility. This is where the cult audience will be found. The only real drawback to this is that you must play with people near your own level, so the further you go, the harder it will be to find people to play with, at least in the early days of the game.

Dead Island is a good game with several problems, and one hugely redeeming quality—the online play. As a single player game, Dead Island is mindless fun that gets repetitive, but has so much to explore and see that it is an average game—never a bad one. But mix in some amazing online play, and the game becomes great. Average them together and you have a game that is good, but held back.

If you aren’t into online gaming, then Dead Island is not for you, unless you have a particular interest (and hatred) of the undead, so much so that you want to spend 30+-hours beating them to a bloody pulp with pipes and knives. If you can get a group together willing to put some serious hours in, or if you are fine with playing with the random straggler, then Dead Island may be a sleeper hit of the year for you.