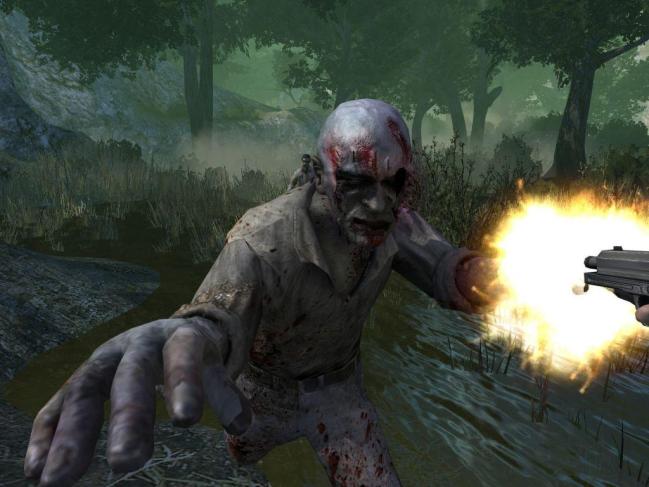 Everyone, be sure that you are sitting down before you read this—there is a zombie-based video game on the way! Unbelievable, that has never been done! Well, except for Left4Dead.  And the sequel.  And both Dead Rising games. And House of the Dead, Red Dead Redemption: Undead Nightmare, most of the first Resident Evil games, Zombie Apocalypse, Treyarch’s Call of Duty games… You  get the point, there are a lot of them. So in a video game industry that is utterly saturated by zombies, you need a catch—a hook, something to set the game apart from other, similar titles. Developer Techland thinks that they have that with the upcoming, survival-horror game, Dead Island. And while the recently released trailer may be slim on gameplay, it is still an impressive video clip worth watching.

Dead Island is primarily based on the concept of melee combat. The game is set on a remote resort island in the South Pacific where a zombie plague has infected the majority of the island’s guests. In keeping with the setting, you won’t find more than a handful of firearms, and ammo will also be scarce. As a result, you will spend the majority of your zombie killin’ time in melee combat, using machetes, bats, and anything else that you can smack the undead with.

Dead Island is a title that in many ways has mimicked its undead antagonists. Originally announced way back in 2007, the game floundered then appeared to die as it searched for a publisher. Then, as if rising from the dead, the title began to walk around and lunge at potential publishers, so to speak. Publisher Deep Silver stepped, and the game was soon back on track.

No word yet on when to expect the game on PC, PS3 and Xbox 360, but if the fairly amazing trailer below is any indication, expect to hear a lot more about this game in the months to come.

Warning: The following trailer may not be suitable for all ages]

How to escape the hold in Return to Monkey Island
Dragon Quest Treasures shows off monster-catching gameplay
Sega is putting all of its chips on the table with Sonic Frontiers
Star Ocean: The Divine Force release date, trailers, gameplay, and more
Best Prime Day Deals: What to expect from the October event
Netflix is building its own internal video game studio in Finland
The best Mac games for 2022
Lenovo Legion i7 gaming PCs and laptops both got massive discounts
Grand Theft Auto 6: release date, trailer, gameplay, and more
Walmart dives into the Metaverse with two Roblox games
Best gaming headset deals for October 2022
Best gaming monitor deals for October 2022
PlayStation VR2: release date, launch games, price, and more