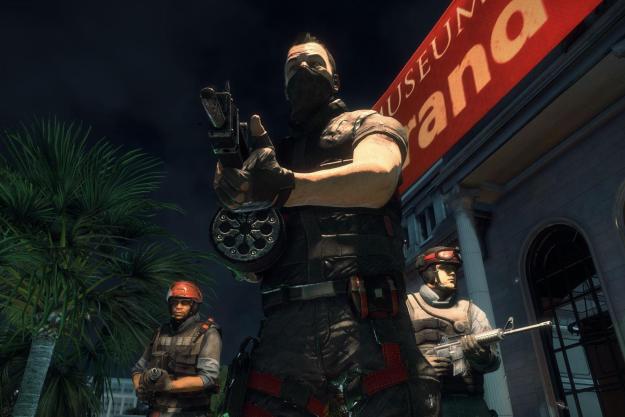 “Dead Rising 3's first DLC pack, Operation Broken Eagle, takes a great idea and does little with it that feels fresh or original.”

Capcom Vancouver has an ambitious plan in place with its four-part downloadable content series for Dead Rising 3. ‘The Untold Stories of Los Perdidos’ follows four different characters on their own journeys through the zombie-infested city, with each story dovetailing into the events of the main game. The first of these packs, Operation Broken Eagle, is set before Nick Ramos’ own adventure. Players step into the role of Spec Ops tough guy Adam Kane, who is tasked with locating the missing U.S. President.

If there’s one word that appropriately describes Operation Broken Eagle, it’s “familiar.” This is textbook “more Dead Rising,” with a series of missions for Kane that, design-wise, build on the play established in the core game. Go here, clear out zombies. Go there, pick up a vehicle, bring it back in one piece. While you’re at it, collect some dog tags and hack some cameras for bonus XP (your progression from the main game carries over).

Within that limited context, Operation Broken Eagle entertains. There are some new weapons (including one combo blueprint), mostly firearms. The new vehicle is an armored tank-like thing, complete with mounted chain gun, that’s great for rolling through zombie hordes. The story isn’t heavy on twists, but the fetch-y nature of your missions sends you across the length and breadth of Los Perdidos. If you enjoy Dead Rising 3‘s particular blend of zombie-smashing open world action, you’ll be happy to find more of it in this first salvo of DLC.

The problem isn’t with the content, it’s with the approach. Story is arguably the weakest facet of the Dead Rising 3 experience. It’s certainly one of the down notes that we highlighted in our own review. And yet the whole gimmick of the game’s post-release content offering – not just this add-on, but the three other to follow as well – appears to hinge on telling a story.

When Operation Broken Eagle opens there’s a cutscene that serves as a framing device for The Untold Stories of Los Perdidos. It establishes that the events of each DLC offering were observed on the city’s surveillance system by some unknown party. Adam’s story is a chapter unto itself, with ties to Nick’s journey; it’s implied that the subsequent three add-ons will do the same. That’s not a bad concept at all, but ultimately ‘Untold Stories’ is just a wrapper. The problem with Operation Broken Eagle isn’t in the conceit, it’s in the execution.

“More Dead Rising 3” isn’t enough. There’s nothing in this 2-3 hours worth of content that builds any new ideas into the game you’re playing. Since you’ve probably put 15-20 hours into the core game to get to the point that you’re interested in DLC, do you really want to spend another chunk of time doing the same thing?

What’s worse is it’s not even that. The same thing might be more palatable. This is just a stripped down version of the same thing. There’s no cooperative play in the DLC. There’s no new Psycho bosses, arguably one of the core game’s high points. You don’t even have access to the Dead Rising 3‘s useful new weapons locker, since safehouses from the Nick Ramos are little more than targets to be infected by Kane. Another collectible for the DLC, to go along with gathering dog tags and hacking cameras.

Your enjoyment of Operation Broken Eagle depends entirely on two factors: an appreciation for the story in Dead Rising 3 and a desire to run through missions similar to those you encounter in the main game. It’s hardly enough to build one DLC pack on, let alone four. Hopefully, subsequent add-on packs are mindful of this shortcoming and work harder to provide players with fresh ways to enjoy the game.

This game was reviewed on an Xbox One using a Season Pass provided by Microsoft.