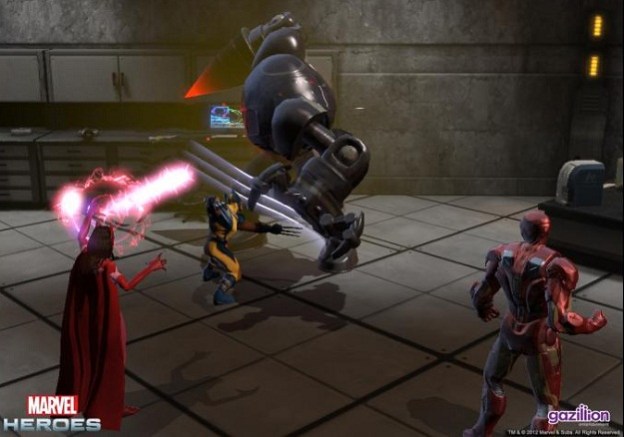 Doctor Doom has a good shot at taking down the Hulk, or at least keeping him at bay, but what about seven Hulks? Or three Hulks working alongside five Punishers, four Ms. Marvels, and a pair of wisecracking Deadpools?

This crazytown fanboy dream becomes a reality in Gazillion Entertainment’s upcoming free-to-play massively multiplayer action/RPG, Marvel Heroes. It’s an idea conceived by president and CEO David Brevik, best known as the creator of Diablo, who saw the potential for marrying his creation with a beloved IP after playing through a game that is in many ways a precursor to Heroes.

“I’m a huge fan of Marvel: Ultimate Alliance,” Brevik told Digital Trends. “Being the person that created Diablo, I saw the resemblance and I love Marvel so it was kind of the marriage of both of those worlds [that made me] love that game. When I came here to Gazillion to do a Marvel MMO, my background combined with my love for Marvel: Ultimate Alliance [made for] a pretty easy choice in terms of what we wanted to do.”

Brevik set out at Gazillion to bring a little something different to the MMO space, an experience that could appeal to fans of his earlier work. “Nowadays, ‘MMO’ means World of Warcraft, or a clone of that type. Originally it was EverQuest, but [there have always been] some very radically different MMOs.”

He points specifically to Ultima Online and EVE Online as examples within the genre of taking a fresh approach. “MMO is a type of gameplay and not really an exact structure to an entire game,” Brevik says. “It just means that you can play with thousands of people in the same world. My background was with making Diablo, and I really wanted to take Diablo 2 to the next level. I wanted to infuse an IP that I love.”

It is here that Marvel Heroes was born. The game delivers on Brevik’s goal of giving players the opportunity to play as their favorite heroes together with friends, and in more than just a limited co-op setting. He’s a Marvel fan, of course, but he’s a game developer first and a big goal with Marvel Heroes is also to disrupt the status quo.

“I thought it would be a great add to the genre because the heroes can do things that, in fantasy games, you don’t really have access to,” Brevik explains. “Also, making a massively multiplayer action/RPG is something that I felt could really push the genre forward.”

That right there is the DNA for Marvel Heroes: action/RPG. It’s Marvel: Ultimate Alliance all over again, only it unfolds on a much grander scale. Convincing Marvel was relatively easy. There’s no question that giving fans the opportunity to play as their favorite heroes is appealing. Even when Disney entered the picture following it’s acquisition of Marvel, nothing changed with Gazillion’s work on Heroes.

“Disney bought Marvel about a year after we signed our agreement, or something like that – it was not long after we started working on the project that Disney acquired Marvel. It was completely business as usual [after Disney came in] which, honestly, surprised me a bit,” Brevik admits.

“I’ve been through these things before and things do change sometimes. It’s been pleasant. Every now and then we’ll have someone from Disney coming in and wanting to take a look at the game, but it’s been so minor that it’s been nearly irrelevant.”

Marvel Heroes sets itself apart from other superhero-focused MMOs in offering players the opportunity to actually play as established characters. You’re not creating a hero from scratch; instead, you’re selecting characters like Wolverine, Ms. Marvel, or Deadpool, or any number of others from a list.

What ends up happening when you get online is you’re suddenly surrounded by assorted characters, many of which are the same as the one you chose. The Doctor Doom vs. Hulks example is a very real possibility in Heroes. You’d think the folks in charge at Marvel would have taken issue with the continuity disruption, but the opposite is true.

“This is something that Marvel was on board with pretty early,” Brevik explains. “We made it clear right off the bat that this is the way we wanted to go and they thought that it was a great differentiation [from other, similar MMOs]. We also thought that it was the strength of the IP.”

“This IP is about these characters, it’s about their relationships, it’s about their history, it’s about all of these things that make great story and drama. If you don’t have that, if you’re creating your own [heroes], there’s no context for anything. Whoever you’re making, nobody understands. I wanted to get away from that and make a serious superhero game, and I thought that this was a great way to solve all the problems.”

Brevik chuckles at the idea of two Hulks fighting side by side. “The fact is: nobody complains about it and it’s just fun! That kind of trumps all other rules.”

Marvel Heroes is currently in its beta phase, which means that regular folks and – presumably – future players of the finished product are getting an early peek at the work-in-progress. Changes are made regularly and character saves are scrubbed just as often, but the incoming flow of feedback very directly effects Gazillion’s efforts.

“I think that, in general, the beta is going pretty well. It’s providing us with a lot of useful information and it’s allowing us to test some very new and unique technology that we are creating,” Brevik says.

“That’s really the point of the beta, to try to get some testing in, test our infrastructure as well as game balance and different content. We’ve gotten great feedback from our users, we’ve really been listening to the community, we’ve been trying to address concerns that they have. The kind of things that you do in a beta [that make for] a stronger game in the end.”

The changes made so far have been of the across-the-board variety, with everything from the item and inventory system to individual heroes skills being changed. More beyond that too: user interface changes, added video settings to address issues certain players were running into, even new features entirely. Brevik is particularly excited about an upcoming patch that should roll out in mid-February 2013.

“There’s a lot that is going to be in this patch. It adds another chapter-plus in content, a revamp of the UI, new characters, new heroes to play, a bunch of new costumes, a costume crafting system, plus some other stuff that’s under the hood and not as obvious,” he reveals. “We did some optimization so there’s a wider range of machines that can run the game. We also changed… the client-server syncing to make [the game] more lag-tolerant.”

Costume crafting is an outgrowth of a previously added feature that gives players the opportunity to level up specific vendors – along with their stock of goods – by selling unneeded gear back for XP rather than cash. Players won’t be able to design costumes of their own, but they’ll be able to build a sense of investment in previously cosmetic-only outfits that they’ve found in the game or paid for as a microtransaction.

“You get to pick which look you have [based on the skins in your collection] and then apply stat [boosters] that are randomly found in the game world,” Brevik explains. A second crafting system is in place as well, allowing players to level up the stat boosts that are slotted in. Best of all, none of this is permanent; equipped boosts can be swapped out freely. For players that want a better sense of investment, costume crafting is a step in their direction.

“We’re really listening to the feedback of the users and trying to incorporate as many of their [suggested] changes as possible,” Brevik says. “Yes, we’re making this game… and we have a plan, but we really want [our community] to be a part of this process, because in the end these are the people we want playing the game. If there are things that are reasonable or good ideas, then we want to incorporate them.”

The beta is just where things are at right now, and it’s technically not even the eventual game’s starting point. Marvel Heroes should launch in full sometime in Spring 2013, but letting the public in doesn’t spell the end of Gazillion’s efforts, of course. This is an MMO after all.

There’s more story to come, along with new locations, features, and upgrades. All of the story-related content starts out free and will remain free, even as additional chapters are added and the scope of the initial release expands. Microtransactions are instead focused around offering players additional heroes and skins – both of which can be found in-game as well – along with time-saving boosters.

It’s important to note that Marvel continues to be tied in on all of this. As Brevik says, “we have this founders program going on right now which allows people to get their heroes ahead of time. In our Ultimate pack on that we have the Iron Man 3 armor. It’s…. the exact digital model that they used to make the suit in the movie, from the studio.”

“We have tons of costumes in the game from the Marvel Now stuff that’s going on in the comics. We are coordinated with them on movies and in comics and in animation. We used a lot of their other resources too, [such as] artists that draw our motion comics, a lot of the same people who voice their stuff for animation. So we are coordinating to make this a really amazing Marvel experience and very, very true to the Marvel IP.”

The community is an ever-present component as well when it comes to deciding what gets added to the game. “This is the number one question we get: is Character X going to be in the game?” Brevik laughs, long and loud.

“I think that that would be a lot of fun, to give the community a small list of characters to choose from and allow them to choose which one to add next. We’ll make it very official and allow people to vote. We are going to involve them as much as we possibly can in this development process so that we can make a game that we can all enjoy together.”

Topics
The best upcoming PS5 games: 2023 and beyond
Best PS5 game deals for January: Hours of AAA entertainment from $17
Ken and Roberta Williams are back to evolve the adventure game genre
These 9 ‘podcast games’ are perfect for multitaskers
WWE 2K23 brings the pain with John Cena, Cody Rhodes, and Bad Bunny
The best gaming PCs for 2023: Dell, Origin, Lenovo, and more
You can turn off Frey and Cuff’s banter in Forspoken
The best Xbox Series X and Series S deals for January 2023
This Alienware gaming PC with an RTX 3090 is $520 off right now
NBA All-World aims to replicate Pokémon Go’s success starting today
This samurai strategy game is my new deck-builder obsession
How to connect an Xbox controller to a PC
GTA 5 cheat codes and secrets for PS4, PS5, Xbox, and PC