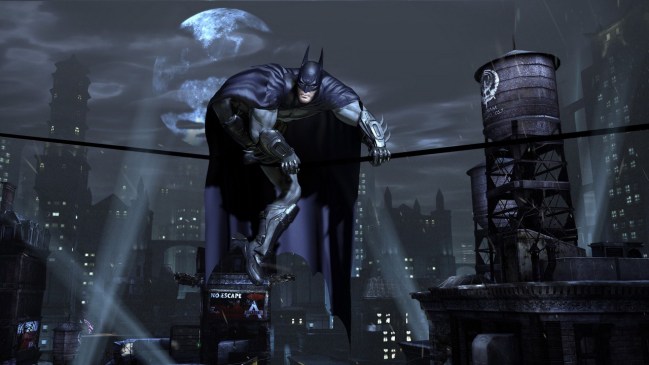 If you enjoyed the look, feel and comic-book universe displayed in Rocksteady’s 2009 hit, Batman: Arkham Asylum, then you are in luck! If not, there is nothing to see here, move along, move along.

Batman: Arkham City is very much like its predecessor, with (at least) four major exceptions. The first is that the area of Gotham you explore is five times bigger than the Asylum of the first game. Like the original, Arkham City is an open world environment, and while some of the sections won’t be available until you receive certain upgrades, you could still spend a lot of time simply wandering around, solving puzzles and beating the odd thug to make up for the abandonment issues Batman has.

The second major difference is the glide mechanic. When you jump from a high point, your cape will act like a parasail. With the proper timing and movements, combined with the grapple gun which can now propel you past a point, you can more or less fly. It might not seem like a major addition, and maybe it isn’t. But it is an entirely new gameplay mechanic that people are going to end up spending a ton of time messing with. Anyone that played Spider-Man 2 and spent the majority of the time just swinging around while ignoring the helpless pleas of citizens will appreciate the inclusion.

When activated, everything goes black, except for a few outlines of the surroundings, and a highlight on whatever is worth looking at. In the playable demo at E3, Batman was investigating a sniper round. Using detective mode, he found the bullet hole, which then led him to a break in the window. Together that gave him the angle of the shot, and the location of the shooter. The detective mode can only be used to help in certain locations, which is a smart change.

The fourth major difference to the game is the inclusion of Catwoman as a playable character. When zipping around Gotham, you will come across a few locations where Batman can take a powder and go grab some coffee, or whatever it is Batman does to relax. At this point you jump into Catwoman’s story, which appears to be mission based and non-linear, although that might just be the impression that the demo gave. It is, however, a unique story to the character.

Catwoman has her own motives and goals, and sometimes they will help Batman, other times they will help only herself. In the demo of Catwoman shown, she is on the trail of a cache of treasures sequestered by Hugo Strange, the game’s antagonist. But first to reach the underground vault, she needs to take on a handful of cannon-fodder thugs. Catwoman moves and plays differently from Batman when it comes to the combat. She is faster, but weaker, so to compensate she uses aerobatics and gymnastic moves, plus she has a steel whip and several unique tools at her disposal. Countering is still a major part of the fighting, but there is no doubt that Catwoman is a different character, and not just a new character skin to play in.

Once she took care of the guards, the game becomes more of a stealth mission, but you can always turn it into a brawler if you like. On certain surfaces, Catwoman can move like Spider-man, using her claws to hook into the ceiling or wall and climb. This gives her the ability to drop behind enemies and pickpocket them, or take them out with a silent takedown. Once Catwoman had made her way through the vault and opened the doors with the stolen key cards (and the help of Poison Ivy), she took her prize and left, then the game switched back to Batman.

When the hands-on demo with Batman began, the first thing that will probably strike you is the scale of Gotham City in general, and specifically the walled off section known as Arkham City. It is fairly easy to move around quickly and quietly if you like, or you can pick a fight around most corners. The private security force watching the city will also have helicopters patrolling the area that can even be used to unwittingly give you a lift to a new location. At first, these troops are just observers, but as Batman gets more involved with the prison they will become more aggressive and violent.

Several of Batman’s rogues will make an appearance, including the Riddler, Joker, Two-Face, Penguin and more. The Riddler puzzles–which were relatively simple puzzles in the last game–will be more in-depth, and some will require you to interact more. In some cases you will even need to hunt down the Riddler’s people to solve the puzzle. As with the last game, the completion of the Riddler puzzles is optional, but there is more meat to them this time out.

Fans of comic books, fans of Batman in particular, or just fans of good action games should keep an eye out for Batman: Arkham City when it is released for PC, PS3 and Xbox 360 on October 18.