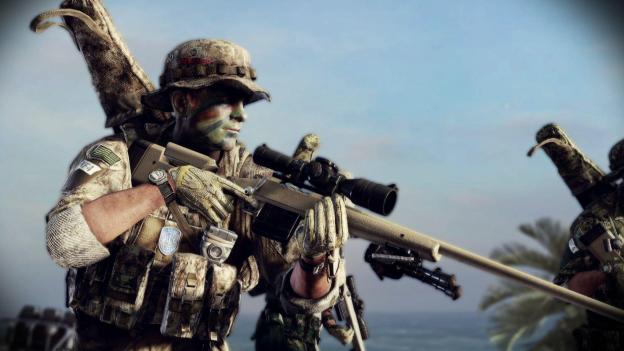 Electronic Arts will no longer pay gun-makers to use depictions of their real-life weapons in games, but will continue to depict those weapons in its games anyway. Reuters reports that EA believes it has a free speech right to depict realistic weapons in games like Medal of Honor and Battlefield without paying licensing fees to the manufacturers that hold the trademarks for those weapons.

“We’re telling a story and we have a point of view,” EA President Frank Gibeau said. “A book doesn’t pay for saying the word ‘Colt,’ for example.”

The move is clearly intended to distance EA from the gun industry, who has recently and repeatedly attempted to blame video games for the spike in mass shootings. Just days after the Newtown, Conn. shooting, National Rifle Association’s Executive Vice President Wayne LaPierre attempted rather callously to shift the blame from guns to video games. It’s not EA’s first effort to do so, either; days after LaPierre’s statements EA removed links to real-world gun makers’ websites that were featured on the official Medal of Honor: Warfighter site.

EA seems more than willing to go to court to defend its right to depict trademarks without licensing them. In fact, it’s about to do so: the publisher preemptively sued Bell Helicopter when the aircraft maker asserted that EA’s use of its choppers in a Battlefield game went beyond fair use. That trial is set to take place in June, and no doubt firearm makers will be watching eagerly to see how it turns out.

NBA 2K22 Is Here, and You Can Buy Now, Pay Later with GameStop
The best EA games of all time
Everything announced at EA Live: Dead Space, Battlefield Portal, and more
Grid Legends is EA’s new racing game with a story mode
How to redeem Mystery Gifts in Pokémon Scarlet and Violet
Call of Duty: Warzone 2.0 desperately needs to give players more health
Don’t miss this Xbox Series S Cyber Monday deal — ends midnight
Now’s the perfect time to stock up on PS5 controllers
How to evolve Tandemaus into Maushold in Pokémon Scarlet and Violet
Fortnite Chapter 3, Season 4 guide: All week 10 quests and how to complete them
All Fortnite Chapter 3, Season 4 quests
‘Wordle’ today, November 29: Answer, hints, and help for word of the day (#528)
Crisis Core: Final Fantasy VII Reunion works best as a portable game