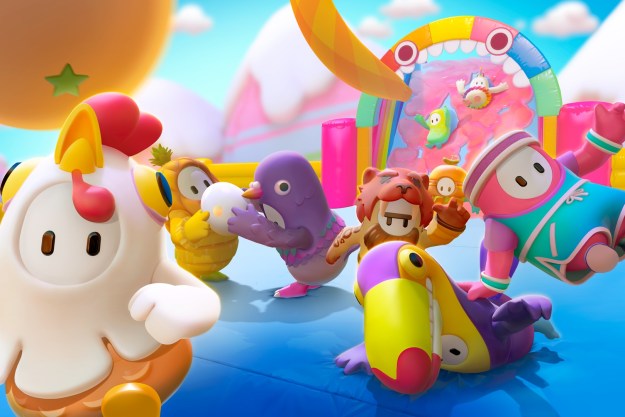 “Fall Guys is a family-friendly battle royale and a game of the year contender.”

It’s hard to imagine anyone not falling in love with Fall Guys, a new battle royale that overcomes its flaws by providing a unique experience in the genre. Its colorful world, charming character designs, and bountiful cosmetics will bring some much-needed joy into any player’s life.

The game, unfortunately, is also going through a few growing pains as its immense popularity clashed with the fact that its developer, Mediatonic, has only 13 employees. The team has been working tirelessly to iron out bugs, some of which have made certain game types for a select few players unplayable. Despite that, some of the smaller quirks add to the charm of the game, and by that, I mean that I keep coming back for more even if I don’t think I have a shot at winning.

Fall Guys takes inspiration from several sources, but its biggest influences are TV game shows in the vein of Wipeout. Each match, or “show” as the game refers to them, is comprised of several rounds. Each round is designed to whittle down the group of 60 players until there is only one left standing. While many battle royale confrontations can last up to over a half-hour depending on a player’s skill level, a show in Fall Guys will only ever take between 10 and 15 minutes, making for an addictive “just one more” experience.

I keep coming back for more even if I don’t think I have a shot at winning.

The titular fall guys are the anthropomorphic colorful beans that are at the heart of the game. Players can unlock cosmetics through an experienced-based “battle pass,” as well as Kudos, an in-game currency, which can also be purchased with real-world money and used to acquire additional patterns, colors, and costumes for your fall guy. There are tons of customization options for you to pick and choose from, allowing for every character in the game to be unique and distinguishable.

Some cosmetics require a “premium” currency called Crowns, although you cannot purchase these with real-world money. Crowns are either provided via a few select levels on the season’s battle pass, or they are awarded for every show you win. In almost every other battle royale, winning only gets you bragging rights and a points boost. There’s a greater incentive here to win in Fall Guys, making every victory even sweeter and every defeat more bitter. Overall, Fall Guys has one of the best monetization schemes I’ve seen in a game yet and does not feel like Mediatonic and publisher Devolver Digital are nickel-and-diming you for better cosmetics.

All these elements make for the first family-friendly battle royale. To the best of my knowledge, it’s the first game in the genre that doesn’t require players to shoot each other to win. Many titles are geared toward an older audience, such as PlayerUnknown’s Battlegrounds and Call of Duty: Warzone, and some skew to younger gamers, like Fortnite, but none offer the truly all-ages experience that Fall Guys does.

Making the game even more accessible to a broader player base is the simplicity of its controls. Aside from moving your character, the only things you need to worry about are jumping, diving, and grabbing. There’s no loadout to manage or meta gameplay, like building in Fortnite or buying equipment in Warzone, to deal with. Most of the maps will require the use of all three skills. While on the surface, this may seem to make for very shallow gameplay, the more you play, the more you’ll find certain strategies and opportunities to use specific moves that may not have been apparent at first glance.

Fall Guys has one of the best monetization schemes I’ve seen in a game yet.

For example, in Fall Ball, one of my personal favorites, two teams compete against each other in a Rocket League-style game of trying to knock soccer balls into the opposingt team’s goal. At first, it seems that the only strategy is to jump and dive to hit the ball. But players began devising defensive maneuvers by grabbing onto competitors to prevent them from reaching the ball at crucial moments. Moves like these show that there’s a learning curve to mastering Fall Guys’ mechanics, and there’s plenty of room for the growth of your abilities.

Most of the games are a ton of fun to play, and personally, there are only one or two that I groan at when they come up in the rotation. There are solo and team-based rounds, and they each have different objectives. Some games will ask you to race to the finish while avoiding obstacles or attempt to avoid being eliminated. Others will ask you to have met specific criteria before a timer runs out. There’s a ton of variety, meaning each show will take a completely different course.

The team has promised additional levels and cosmetics with every season and added a new round since launch. However, it would be nice if the games that are there were able to tweak themselves slightly to make for a unique experience. The level See Saw, which has fall guys racing to the finish across giant platforms that players have to balance on, could have a rotation of placements for the platforms. Instead, it’s the same layout for the level every time you load into it. Adjustments like these could make 25 maps feel like hundreds.

Regardless, the game types are fun and have not worn out their welcome, except for Perfect Match. It features players on a 4×4 grid and sporadically shows images of fruit on a handful of the tiles, before revealing which fruit players need to be standing on before the rest of the tiles disappear after a handful of seconds. The game completely ruins the momentum of the show and is easy to get through as you usually can just follow the herd to the right tiles. I’ve been in Perfect Match games where no contestants have been eliminated. It’s undeniably the worst of the game types.

Issues on the back end

The real issues with Fall Guys, however, are on the back end. For the first week, the game was littered with server problems due to its popularity. It meant that many players weren’t able to connect, and the servers for the game were routinely taken down for maintenance. Even if you did get into a game, sometimes the rounds would be unplayable.

The game Tip Toe, which asks you to get to the finish via a large grid of tiles — some safe, others that collapse if stepped on — had a game-breaking bug for me in the first two weeks of release. If I moved too quickly, I would slide as if the tiles were covered in oil, and would consistently fly off the board. Despite my best efforts, I never won a single game of Tip Toe before the issue was patched.

Many of these issues have been fixed, and servers are far more stable than they were at launch. However, they’re not at 100%, meaning that you will occasionally fail to connect. Last night, connectivity was so bad it was almost like we were playing on launch day again. In addition, some massive bugs have not been squashed. On the PC version, players found a way to alter the game via their Steam name. Players can bring up competitors’ names at any point, and certain monikers that include certain words will show up in giant letters, obscuring the match. As such, playing on PC results in your name being “Fall Guy” followed a random four numbers.

This is particularly frustrating when playing in a party, of which up to four players can jump into a show. When a player is eliminated, it will show them the gameplay of a random Fall Guy, not necessarily one in your party. When everyone is just “Fall Guy ____,” it makes it cumbersome to switch the camera to the viewpoint of the person you want. Hopefully, both this issue and automatic switching to a party member’s perspective, will be fixed in the next update, although with such a small team at MediaTonic, it’s understandable that these problems have not yet been resolved.

It’s a testament to the game, however, that despite these glaring issues, it is still an experience I recommend without hesitation. It has become one of my favorite games of the year.

The zeitgeist around the game adds to the enjoyment

An element outside of the game itself that improves it is its popularity. The game smartly released in a similar fashion to Rocket League by being free for a time for PlayStation Plus subscribers. Evidence shows that more than 10 million people on PlayStation 4 are playing the game. In addition, both the regular and collectors editions of the PC version have sat at the top of the Steam sales charts since launch. It is currently one of the most, if not frequently the most, viewed games on Twitch, with hundreds of thousands of viewers consistently.

It’s a testament to the game that despite glaring issues, it is still an experience I recommend without hesitation.

Everyone on my social media is talking about the game, sharing clips of either incredible victories or devastating losses. The Fall Guys’ Twitter account has been killing it with its posts, and is currently auctioning off in-game cosmetics to the highest bidder for charity.

The zeitgeist around the game is bountiful and a pleasure to be a part of, something that cannot usually be said about most games. It means that you shouldn’t wait to play, even though the game appears to have plenty of legs for months and years to come.

Fall Guys is the game of the moment, and one of the best titles to release in 2020.

There are certainly plenty of other battle royale games, none of which are as accessible to as large a variety of players as Fall Guys. Super Mario Party is another fun mini-game collection, which has the advantage of being on the Switch but is a lackluster experience in comparison in almost every other way.

The beauty of Fall Guys is: How long do you want it to last? I’ve sat down for both one or two matches or played for numerous hours at a time. The game, so far, is still as fun, if not more so, than my first few rounds. With new cosmetics and levels to come, as well as the community around the game growing, I can confidently say Fall Guys is here to stay.

Yes. The beauty of it is that if you have PS Plus, which you need to play on PS4 anyway, the game is free through the end of August. The $40 price tag on Steam will net you hours of fun, and the DLC packs that are optional to purchase have some great cosmetics in them. Do not miss out on this game.