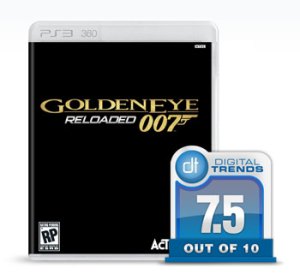 Is it a remake of a reboot, or a reboot of a remake? One day shy of a year ago, Eurocom dared to do the unthinkable by taking one of the most beloved games of all-time, and release a remake of GoldenEye 007 for the Wii. While it upset some purists that decried the possible dilution of their beloved nostalgia-drenched memories, most people were just curious if the developer could come up with a good game.

For the most part, the game did a decent job of giving Wii users a solid FPS. The multiplayer was a bit flawed, and the game didn’t offer the “push the envelope” feel that the original did, but it was a good game. Not groundbreaking by any means, but a solid title for FPS-hungry Wii fans.

But Eurocom’s plans for world domination (or at least video game sales charts domination) didn’t end at the Wii. One year later, GoldenEye returns again, this time with HD-ified graphics, a new single-player game mode and a few other tricks, as GoldenEye 007 is reintroduced as GoldenEye 007: Reloaded for the PS3 and Xbox 360.

GoldenEye, but now with more shiny!

While the plot from the Wii game hasn’t changed, those that are fans of the original game and/or movie will notice a few significant alterations to the plot. At its core, the game still honors the original story, but the game has received a facelift in more than just graphics. The new GoldenEye is wrenched forward in time to fit with the current Bond films, which feature a (slightly) more realistic take, as well as 100-percent more Daniel Craig.

Pierce Brosnan has been ejected from the game like a drunk from a bar, and in his place is the voice and likeness of Daniel Craig. And while the Nintendo 64 rendition of Brosnan’s Bond was basically just a block with vaguely Brosnan-ish features, Craig is a major part of the story.

Set after the events of Quantum of Solace, Bond and his fellow OO-er, Alec Trevelyn, aka 006 are sent on a mission together. The dynamic duo head to Russia to stop a weapons plant’s production, and if you have seen the damage one MI6 Agent can do alone, imagine what two can do. But things soon go FUBAR, and 006 is seemingly executed in front of Bond’s eyes. This is a bad move for the enemies.

After a quick and bloody round of revenge, Bond is off around the world to discover what happened to one of the weapons manufactured at the plant, the GoldenEye, an EMP that can wipe out all computer circuitry on a target from space. Bond follows the trail around the world, leaving more people dead than the swine flu, as he attempts to retrieve the weapon and stop the sinister Janus group in the process.

The game will feel familiar to those that played the original game and/or watched the movie, even though this version could be called a reimagining. Craig tends to opt out of the witty one-liners in favor of smashing people in the face, and the game reflects that. The sense of whimsy inherent in many of the older Bond properties is replaced by a more gritty feel, but that doesn’t take away from the enjoyment.

The levels and missions are exceedingly linear, perhaps event to a fault, and even the secondary objectives take very little effort to find as you whiz through the game, but the new GoldenEye features a lot of variety in the levels that adds to the story. It may feel odd to people hoping to recreate the exact feel of the original property, but the changes make for a better story, and a better campaign.

From controller to Wii nunchuck back to controller

While the Wii version of GoldenEye could accept a controller, they were really designed with the Wii’s nunchuck in mind. And while aiming with a nunchuck offered certain interesting opportunities, it could also be wall-punchingly frustrating at times. Thankfully the game featured a bit of an auto-aim that helped lock onto enemies. Lots of FPS titles have that, but it was a huge factor in the Wii version, and it remains in Reloaded.

At times the auto-aim makes the game easy—incredibly easy. You also have regenerative health and you can take a LOT of damage to begin with, which seems to be a holdover from the Wii version, which was a bit more forgiving because of the unique controller setup than most games. In Reloaded, that means that on the normal difficulty setting, you can occasionally run out into the middle of an enemy controlled area, run a circle around the entire troop, then return to the starting point without dying. In fact, many times it is actually much easier to rush the enemies than to try and take cover behind an object that can be destroyed. The cover system is actually fairly solid, but the cover itself can be flimsy.

All of this combined means that you can walk in a room filled with 20 soldiers, and thanks to the auto-aim and toughness of your character, wipe out all 20 soldiers in under a minute. At times the game is ridiculously simple.

There are two advantages to that though. The first is that there are multiple difficulty settings. If you want a challenge, you can up the settings when you start. The second is that it is kinda fun in a semi-mindless sort of way. The game can sometimes fool you into thinking that you are an FPS god among men. The AI isn’t all that bright, and can be borderline brain dead as they stand out in the open with bullets whizzing by them, so you can walk into a room and annihilate everyone in seconds. It is almost like turning on a cheat code, but that is how the game is designed to be played.

A stealth system also exists, but it is both problematic and unnecessary unless you really want to try. It is a simple matter of walking up to enemies and using an instant-kill/subdue maneuver, and sometimes you can get away with doing it to one enemy while he is talking to another, then attacking the other before he can fire off a shot.

Despite it all, the game is a fun trek through a few days in the life of everyone’s favorite mass murderer/Super Spy. The campaign is easy and linear, but not dull.

Everything old is new again

Adding to the single player experience, and new to Reloaded, are the MI6 Challenge missions. These are all fairly entertaining if you just can’t get enough of the single-player experience, but the AI is even more of an issue here, and the ease of the game makes it somewhat unrewarding–especially since there are just objectives and no campaign to keep you interested. It’s not a bad addition, but neither is it a major one.

The real focus is–and should be–on the multiplayer, which is what made the original such a classic. If you never played the original, than the likelihood of this version blowing you away is slim. The competitive multiplayer is alright, but it has a few glaring problems. That said, there is a lot to offer as well, which can help you overlook those issues—if you want to.

The first thing you will notice is that there are a lot of gametypes to try online. A whole lot. You have everything from the traditional free-for-all and team deathmatch modes, as well as several objective based games. The games can hold up to 16 players, which can make for some chaotic fun, and the amount of choices means that everyone will find something they like. There is even a classic mode that takes it old school and removes regenerative health in favor of health packs like the original. In terms of options, there aren’t many games that have such a robust selection. But while the options are plentiful, the gameplay is questionable.

The graphics in the game aren’t bad, but they aren’t anywhere near the level that the current FPS games are at. In the campaign that isn’t much of an issue. Online though, the game can look weird, especially the character animations, which makes it hard to track opponents at times as they skip and jerk across the map. It feels like lag at first, and lag is an issue that will occasionally rear its ugly head and make the game feel exceedingly sluggish, but the graphics and animations are always like that. The campaign seems to have received the HD attention, while the multiplayer was given a quick shine then sent out the door.

But really it just takes a bit to get used to. The weapons also take a bit of learning as you can put a clip into an enemy to kill them, or die by a single shotgun blast fired from 30 feet away. There is a slight issue with weapons balance.

If you can accept the flaws–which is a big if–then the multiplayer is actually a good offering at its core, it just takes a bit of getting used  to as the game doesn’t have quite the same level of polish that some of the current generation of shooters do. But if you are playing at home against three other people via splitscreen, the game soars.

It isn’t the same as the original, nor could it hope to match something that has had well over a decade to grow in our minds, but the splitscreen multiplayer is a highlight and well worth calling up your friends to relive some of the glory days. All the old options like paintball are back, and for splitscreen fun, Reloaded has one of the best offerings.

GoldenEye 007: Reloaded isn’t going to topple any of the modern first-person shooters and both the campaign and multiplayer have issues, but there is some fun to be squeezed from the game. The campaign has a certain mindless charm as you massacre your way through countless waves of cannon fodder, and the story should appeal to Bond fans–as long as you aren’t really looking for a challenge. It is a quick and easy campaign that isn’t entirely memorable, but isn’t bad either.

The mutliplayer, which was the pillar of the original has a lot to offer, but it is mired by a handful of technical issues that can be overlooked, but not without effort. The splitscreen is the way to go, and in that you can call up friends and relive past glories. For fans of the original and die hard Bond aficionados, GoldenEye: Reloaded has a definite appeal, but it probably won’t much of a lasting impression.