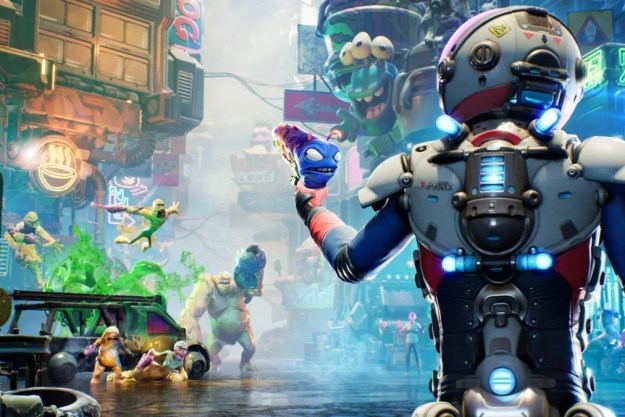 “High on Life takes the right design cues from Metroid Prime, though uneven comedy makes for a hit-and-miss adventure.”

Late in High on Life, I experience a tender moment amid all the cosmic silliness. Two lovers (a star-crossed alien and human duo) find themselves on the verge of a breakup, struggling to grasp their complicated feelings for one another. A heated argument ends with a sweet understanding that, in spite of the overwhelming absurdity of the universe, the two do love one another. That’s capped off by the alien turning to me and insisting that the moment is sincere, taking a shot at a lesser game that might be tempted to undercut that emotional beat.

“You’d be playing some Rockstar game, you fucking asshole,” he says, completely breaking character as he spits out the last few words through a laugh. I can hear someone in the background of the recording cackling too, absolutely losing it over the preposterously aggressive improvisation. It’s a moment that best speaks to developer Squanch Games’ whole creative approach with its new sci-fi shooting adventure. To hell with structure or rules — these are game makers who are having the time of their lives simply trying to make each other laugh. Considering that I had to pause the game during that scene because I was doubled over in my airplane seat cracking up, I’d say that attitude is infectious.

High on Life plays exactly like a Ricky and Morty joke riff: It makes a strong impression upfront, sustains that energy for a while, goes on a little too long for its own good, and tapers off before delivering a true punch line. It can be a touch uneven at times, especially in its hit-and-miss humor, but it sticks the landing overall thanks to its unbridled creativity and deceptively deep gunplay.

Allow me to help you figure out if this game is your jam in a quick sentence: High on Life is a first-person shooter created by Rick and Morty’s Justin Roiland. If you don’t have the tolerance for Roiland’s humor, then I doubt you’ll be able to stomach over 10 hours of it. The comedy here is largely similar to that of Ricky and Morty, as it’s loaded with sci-fi absurdity and adult humor that gleefully swirls down the proverbial potty hand in hand. If you love that style, you’re in for a good time. If you don’t, you’ll want to set the “banter” toggle to off.

A joke tends to lose its power each time you hear it, and there’s a lot of repetition here.

The story finds a nameless protagonist and their sister flung in the middle of an alien conflict while their parents are on vacation. Their house is warped to a far-off planet where a three-eyed alien named Gene enlists their help (and their couch) to hunt down members of the G3, an intergalactic cartel that’s turning humans into drugs. The hero takes on the role of a bounty hunter, tracking down aliens alongside an arsenal of talking guns, called Galatians. The story has a few things to say about family and finding one’s calling in life, but it’s mostly just set dressing for a planet-hopping adventure.

The comedy here is as hit-and-miss as it comes. The talking gun schtick, for instance, oscillates between funny and cloying throughout. Roiland himself has the firmest grasp on the humor here, lending the handgun-like Kenny his signature Morty stutter, but the voice actors are only as funny as their gun’s schtick. JB Smoove (who voices Gus, a shotgun equivalent) doesn’t get as many good gags to play with and Betsy Sorado’s Sweezy is inherently a bit grating. Tim Robinson, on the other hand, gets to fire out some zingers as he plays the role of Creature, a dad who uses his children like bullets and proudly watches them live out their short life span. They grow up so fast.

There’s similar inconsistency throughout. A fair amount of gags fall flat, as they substitute yelling, swearing, or bodily functions for an actual joke. Others had me cackling. A key emotional beat happens at a “Space Applebee’s,” a hilarious riff on Nathan For You’s Dumb Starbucks. At one point, I find a collectible card that just has Frasier’s face on it, with flavor text wondering if it’s even legal for the developers to include it. The best laughs in High on Life are the ones that feel like the Squanch Games crew just making offhand jokes to one another and including what made them laugh. The biggest reaction I had was during an obnoxiously long conversation with an “alien cum” vendor, which abruptly ended with Smoove breaking character as I tried to buy a vial. You can almost hear the developers saying, “Screw it, we’re keeping it.”

High on Life ultimately runs into problems that are common in comedy games of this nature. For one, there’s a lot of dead air to fill due to its length. While there are plenty of good side gags packed into every location (dueling broadcasts about Mothers For and Against Violence make for a great background goof), it’s hard to sustain that level of comedy throughout. By the end, it felt like my guns were just filling space with repeated voice lines. A joke tends to lose its power each time you hear it, and there’s a lot of repetition here.

That’s especially true because Squanch isn’t out to create a walk in the park. High on Life can be challenging, with complex combat that had me dying on its toughest encounters a few times. When one late game boss fight gave me a run for my money, I quickly found myself rolling my eyes as I had to sit through the same Metal Gear Solid riff four or five times. With the emphasis more on authored jokes instead of the emergent humor, I’m left feeling like High on Life doesn’t always take advantage of what makes video games a unique comedic platform.

Though its humor is sure to be polarizing, the actual gameplay is far more agreeable. High on Life takes a lot of design cues from Metroid Prime, delivering a first-person adventure game with an emphasis on platforming. That aspect of it sings, as players unlock new tools that slowly open up the world until every inch of it is easily explorable. It starts with a grappling hook (attached to a bloodthirsty knife) that’s used to cross gaps and avoid poison floors, but builds up with satisfying traversal tools like jetpacks. Platforming is fast and smooth, giving players plenty of opportunities to chain their abilities together to make big moves.

Though High on Life will largely be judged on its humor, its strengths as an adventure game shouldn’t be overlooked.

There’s a strong sense of ability progression throughout the adventure, as guns themselves have utilities outside of combat. Sweezy is able to freeze time, allowing players to squeeze through fan vents, while Creature can shoot his children into pipes to access locked rooms. Some mechanics can wind up feeling a little underutilized, as High on Life doesn’t deliver too many brain-busting environmental puzzles, but there’s enough to make planet revisits worthwhile.

Understanding what makes a Metroidvania work, Squanch fills its alien planets with collectibles, sight gags, and hidden chests. The latter is the most important part, as chests grant pesos that can be used to buy suit and weapon upgrades. There’s a whole lot to purchase, from health increases to mods that change how a weapon works. One mod allowed Kenny’s bullets to ricochet off enemies while in the air, completely changing my playstyle as I focused on juggling my foes. Though there’s a disappointingly slim selection of mods, I still found myself eager to explore so I could nab them all and experiment.

As an adventure game, High on Life excels most of all when it comes to its aesthetic. The world itself is a delight to explore as each location is packed with visual creativity (and fittingly soundtracked by a chill score from electronic musician Tobacco). Blim City is a compact metropolis that’s bustling with chatty aliens, goofy billboards, and hilarious loudspeaker broadcasts. Another planet, inhabited by a tribe of foulmouthed teddy bears, is a colorful jungle that’s rich with cosmic flora. Each biome has its own distinct personality, which keeps the spacefaring adventure’s momentum up — at least until it starts repeating locations in its backtrack-heavy second half.

Though High on Life will largely be judged on its humor, its strengths as an adventure game shouldn’t be overlooked. Squanch Games gets what made games like Metroid Prime so special and connects that to Roiland’s knack for creating distinct sci-fi worlds. Those two are a natural fit for a modest adventure game that’s refreshingly crafted compared to a lot of today’s more bloated game worlds.

What’s most unexpected about High on Life is how well it functions as a first-person shooter. Early on, its combat seems thin. Kenny can pepper enemies with handgun shots and use his “globshot” (a word you’re going to get sick of very fast) to launch enemies in the air. However, each of the game’s four guns gradually layer on complexity until battles become a fast-paced gloop war.

As soon as I got the hang of each gun’s nuances, I reveled in the deep combo potential.

Rather than simply copying a normal weapon archetype, Squanch makes each gun feel special. Sweezy, for instance, functions like a rapid-fire machine gun. But when aiming down sights, it’s able to charge up a long-distance shot that snipes enemies from afar. On top of that, it can freeze time with its secondary ability, adding an entirely different utility that synergizes with every other weapon. In a normal arena battle, I usually find myself freezing an enemy, siccing Creature’s kids on it, sucking in another with Gus’ vacuum ability to finish them off with a shotgun blast, launching another patch of enemies in the air with Kenny’s globshot, and firing at one to ricochet shots down on everyone else. As soon as I got the hang of each gun’s nuances, I reveled in the deep combo potential.

High on Life keeps itself relatively short and compact, which is a good decision considering that it’s already stretched thin as is. I found myself going through the motions a bit in its last few bounties as I walked back through the same few areas and completed more wave-like battles that always go on a beat too long (something that the guns themselves joke about). It all ends in a strangely anticlimactic manner that’s so abrupt that I was waiting for a mid-credit twist.

That’s where I mostly see Roiland’s brand of wandering improv riffs reflected in the shooter’s structure. Like Rick and Morty’s Pickle Rick episode, High on Life doesn’t build to a grand punch line. It’s more focused on those immediate hits of fun that’ll keep players entertained in the moment — you probably remember “I’m Pickle Rick!” clearer than any actual plot details of that episode. Satisfying combat, smooth traversal, and a smattering of hilarious vignettes make for an admirable adventure game whose individual parts are more memorable than the full picture.

Just don’t ask me why I have an achievement that says I spent 15 hours in an alien strip club.

High on Life was tested on PC and Steam Deck.