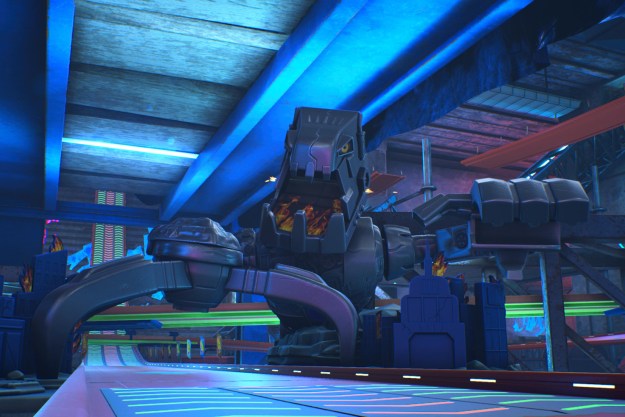 “Hot Wheels Unleashed starts off blazing fast but ends up as a shallow kart racer.”

The kart-racing genre is one packed with standout titles, all bringing their own twists. Mario Kart is the unquestionable king, but tons of other franchises — Sonic and Crash Bandicoot, just to name a few — have their own somewhat unique kart games. Hot Wheels Unleashed then charges into the fray of this competition, screaming “Look how realistic our cars are!” before promptly being blown away like a piece of paper at a racetrack.

That’s because Hot Wheels Unleashed, while a fun kart racer when you first start playing, quickly shows its shallowness. Behind its extremely impressive visuals, Hot Wheels Unleashed is about as barebones as it gets, offering up an extremely simplified kart racing experience that had so much potential to be more, and a bevy of ultimately boring content.

The experience starts strong, going from zero to sixty out the gate. On its initial boot-up, Hot Wheels Unleashed hands you three “blind boxes,” a tastelessly named loot box. Players immediately get three cars that they can use in races, and that first glimpse at their stunningly rendered plastic and aluminum are all that’s needed to get someone hooked.

Before being fun or inventive, Hot Wheels Unleashed is a beautiful game to look at. Everything, from the cars themselves to the tracks players race across, is stunningly detailed. You can even look under the cars and find Mattel’s name (copyrighted, of course) and “Made In Malaysia” printed on the plastic. The game’s vinyl tracks look spectacular, and the sunlight shining off of them and the cars is eye-popping. Of course, those are the visuals that can be expected on a PS5 or PC. If you’re playing the game on a last-gen console, the visual shock-and-awe may not be as punchy.

Regardless, I was sucked into the atmosphere of Hot Wheels Unleashed for the first two hours that I played it. It’s simply a fun game to look at, and its racing mechanics are similarly impressive, although that feeling wears off quickly.

Racing in Hot Wheels Unleashed is dreadfully simple. There aren’t any power-ups on tracks, with the game’s only quirk being how it treats boosting. By drifting or just driving along, your car builds up boost, which you can then use to break away from a pack of cars or catch up to whoever’s in the lead.

However, not all boosts are made equal. Cars in Hot Wheels Unleashed are extremely varied, each with their own stats for speed, acceleration, braking, handling, and of course, boost. Some cars have individual charges of boost to use while others have a meter that can be spent at any time. Naturally, this system means that you’re directed towards whatever car you have that boasts impressive stats. You can also upgrade any car using gears, one of the game’s two currencies, but it’s incredibly expensive to boost a vehicle from common-tier to legendary.

Before being fun or inventive, Hot Wheels Unleashed is a beautiful game to look at.

All that being said, there’s an unspoken genius in Hot Wheels Unleashed‘s track design. Some races are wonderfully unique and open, with one sticking in my head that forced me to perform a 180-degree corkscrew to land my car after driving on an upside-down magnetic track. Another segment from a different race had me drive off the track for a single turn, with guidance on where to go coming from a handful of traffic cones. Except, the game lets you drive outside of those cones, so I would pull a tight drift and bypass the usual turn completely in favor of my much faster shortcut.

It’s a shame then, that Hot Wheels Unleashed never uses either of these concepts to their fullest. If you try to skip over a track by driving with a certain bit of imagination, you’re sent back to the last checkpoint. Gravity and tricks hardly ever come into play, save for a few standout tracks. If used more, these ideas could have set Hot Wheels Unleashed apart in a huge way. Instead of embracing this wackiness though, the game tries to be a straightforward racer, eventually becoming a total bore.

Slow to the finish

The more I played Hot Wheels Unleashed, the more issues with the game I ended up seeing. Aside from a clear inclination to push players towards specific cars instead of whichever one they wanted, the game’s main single-player mode quickly got old. Called Hot Wheels City Rumble, the mode has players go from race to race, which, in a game like Mario Kart, wouldn’t usually get tiring.

However, Hot Wheels Unleashed‘s races hardly have anything to set them apart. Yes, tracks are pretty varied, with only a handful being repeated during my time playing, but eventually, races start blending into one big mess of vinyl and neon. Thankfully, there’s a pretty solid reason to keep at these races. Winning a race rewards players with gears, cosmetics, and coins that can be used to buy more blind boxes.

Those cosmetics aren’t for your cars though; they’re for one of the game’s most superfluous pieces of content. Each player has a basement that can be customized to their heart’s desire, and it’s pretty much a man-cave for a Hot Wheels-obsessed millionaire. Players can customize this area to their liking with unlocked couches, chairs, computers, walls, floors, and more. The appeal, I suppose, is that this area can then be raced around in. However, it’s hard to see the trophies in cases or paintings hanging on walls when your camera is a solid two inches off the ground.

Instead of embracing this wackiness though, the game tries to be a straightforward racer, eventually becoming a total bore.

Hot Wheels Unleashed‘s one innovative trait is its track builder. From the get-go, players can use every single unique piece of track in the game to the fullest extent. It allows players to capitalize on the ideas that were abandoned by the game’s developers, which I can only hope ends up happening.

Outside of its stunning visuals, Hot Wheels Unleashed is a toothless kart racer, relying too heavily on nostalgia goggles and the Hot Wheels brand to carry it instead of the solid ideas that end up hardly being implemented. What players get with Hot Wheels Unleashed is the same experience I had with many of my Hot Wheels as a child; I was entertained for a few hours, then grew bored and tossed it in a box.

That’s not to say that I didn’t have fun with the game. Those few hours were full of spectacle, because it’s simply impossible to not get caught up in the game’s sights and sounds. Eventually, though, it’s going to take more than racing a hot dog car down a strip of vinyl track to keep me interested.

Mario Kart 8 Deluxe is the king of kart racers and likely will be until Nintendo decides to make another Mario Kart title.

Beating all of Hot Wheels Unleashed‘s City Rumble mode will likely take players around 15-20 hours. Trying to collect every car in the game could ratchet that to upwards of 30 by my estimate.

No. Hot Wheels Unleashed is all glitz with no substance, becoming disinteresting far too quickly to justify its price tag.

Topics
How to cheat in Words With Friends
Shoulders of Giants brings mascot-era nostalgia to the roguelite genre
The best PSVR games for 2023
Like a Dragon: Ishin’s Trooper Cards are full of cameos, including Rahul Kohli
How to romance characters in Fire Emblem Engage
How to eliminate enemies with no ranged weapons in Fortnite
Fire Emblem Engage gift guide: every character’s favorite gifts
Call of Duty: Warzone 2.0 Season 2 will finally fix its looting system
The best capture cards for 2023: Xbox, PlayStation, and PC
Best Gaming PC Deals: Save on RTX 3070, 3080, 3090 PCs
Every video game delay that has happened in 2023 so far
Like a Dragon: Ishin! makes the traditional Yakuza format even better
The best upcoming PS5 games: 2023 and beyond