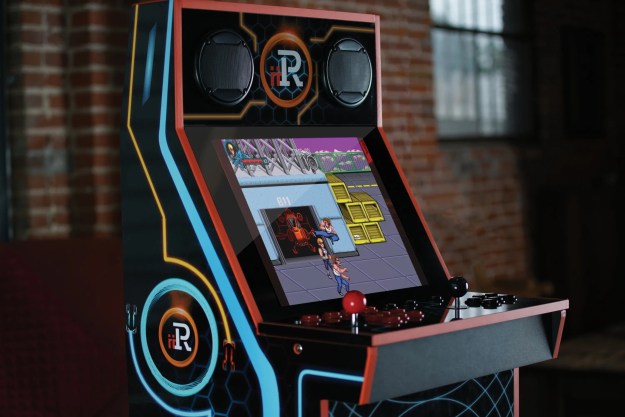 “The iiRcade is a high-quality home arcade with a promising future, but it needs a few more games to justify the price tag.”

You probably have never heard of iiRcade, but the home arcade machine company has come up with a really interesting concept. Rather than offering nostalgia-focused reproductions of classic cabinets, it takes a more modern approach. The machine integrates with a digital storefront where players can buy games à la carte and instantly download them to their machine. It’s an arcade machine with an app store.

It’s a smart business model and fans of home arcade machines seemed to agree. The company launched a successful Kickstarter campaign that brought in more than $600,000. Now that it’s been on the market for a few months, we have a clearer picture of how the service works and whether or not it lives up to its potential.

We found that iiRcade offers a premium home arcade experience with superb build quality. Its high price point and currently limited selection of games might leave gamers understandably skeptical, but it’s a strong foundation that sets up a promising future.

Let’s get the biggest roadblock out of the way first: The iiRcade isn’t cheap. A tabletop version of the machine costs $600 and adding a proper cabinet stand will run buyers another $150. That’s probably going to sound off-putting when comparing it to something like one of Arcade1Up’s machines that cost half the cost.

While that’s certainly a hurdle, it should be noted that you get what you pay for here. The build quality is top-notch. Some cheaper home cabinets can tend to feel a bit like novelty toys, but iiRcade is built for the long haul, which is important considering its unique business model.

Both the stand and tabletop components are easy to assemble. After around three hours of slotting sturdy wooden pieces together, I was up and running with no extra tinkering needed. It’s a rather slim cabinet too, all things considered. It has a sleek design that makes it less bulky than retro cabinets that try to fully replicate original machines.

The iiRcade is built for the long haul, which is important considering its unique business model.

For those who don’t have space for a full 61-inch setup, the stand-alone tabletop version is a perfectly good alternative. What’s nice is that the stand and tabletop can be easily combined or separated. You’re not stuck with one or the other, so there’s some flexibility in how you play. The tabletop mode is still big enough that you’re not going to take it to someone’s house to show it off, but it does make it easier to find a space for it in your home.

The components themselves are where this machine really makes its case. On the visual side, the whole machine is powered by a 1.8GHz Hexa-Core CPU. That’s enough juice to let it run modern indie games with relative ease. There are some noticeable frame dips when getting into top-tier games like Dead Cells, but the fact that the machine can run it at all is impressive.

If the idea is to create the only arcade cabinet you’ll ever need, iiRcade puts its money where its mouth is when it comes to the tech.

It has a 19-inch 1280 x 1024 screen that feels like the right size for the job. While split-screen multiplayer games can feel a little squeezed on it, it’s especially suited to two-player games like Double Dragon of Windjammers, where players share one view. It delivers a clear, sharp image without any retro fuzziness.

On the audio front, the cabinet sports a pair of 100-watt stereo speakers that get surprisingly loud. Even turning them up to half volume felt like overkill.

Of course, the main question regarding any cabinet is the control pad. That’s where iiRcade’s superior quality really starts to show. The eight-way joystick fluidly pivots around to allow for precise actions. There aresix primary buttons, in addition to standard buttons like pause and player select, and they all press down with a satisfying click. There’s a full set of controls for two players as well, making it especially well-suited for 2D fighting games.

There are so many little details beyond those big points. It’s Bluetooth-enabled, features Wi-Fi support, and comes with a headphone jack and much more. If the idea is to create the only arcade cabinet you’ll ever need, iiRcade puts its money where its mouth is when it comes to the tech.

The high quality is nice, but games make or break an arcade cabinet. That’s where the machine is currently something of a mixed bag. The business model promises that more games will be added to the system over time, so players have to take iiRcade at its word and hope it lands some worthwhile titles.

The iiRcade is still very much growing and a little patience is required.

The future seems promising, but it’s hard to get a full picture quite yet. The system comes with 11 games pre-installed, though none of them are particularly exciting. I ended up spending the most time with Maniac Square, a simple Match 3 puzzler, but the rest of the freebies are somewhat tame. Those who want to get the most out of the machine will need to buy some extra titles from the shop.

Hit indie roguelite Dead Cells is the obvious cream of the crop at the moment. It’s almost surreal to play a modern retro game of that quality on an arcade machine. There are some other highlights on the shop too, like Oddmar and Riptide GP: Renegade, though they’re certainly more in the hidden gem camp.

The pricing for individual games can be a little daunting, too. While prices for more modern games seem reasonable, older games feel a touch expensive. Is someone really going to pay $10 for Hoops ’96?

The truth is that iiRcade is still very much growing and a little patience is required. This kind of service is uncharted territory for a home arcade system, and one gets the sense that the company is still figuring it out. There’s good reason to feel optimistic, though. Dead Cells is a tremendous addition that shows iiRcade is targeting the right games. If it can push that momentum and pull in modern retro games from publishers like Devolver Digital, this machine could really fill a specific niche.

We don’t really know for sure how worthwhile an investment the machine will be eventually. But for those who are just itching for a cabinet that’s not constrained to a few games, iiRcade already offers more options than anything else out there, short of hacking a machine with a Raspberry Pi. There just isn’t a lot of competition for this business model, so iiRcade gets to reign uncontested for now.

The iiRcade is an ingenious home arcade system that feels future-proofed next to other machines. It’s high build quality elevates it well past the point of novelty and makes it feel like a sturdy investment for hardcore enthusiasts. Its library of games is still growing, so it’s hard to say if it’s fully worth the high price yet. Even with that big caveat, there’s nothing on the market quite like it, so you really do get what you pay for here.

If there’s a specific game you want to play, Arcade1Up offers cheaper cabinets with a more focused selection of games. But iiRcade’s selection is much wider than your average machine, though.

Quite a while theoretically. It’s a sturdy machine with excellent controls. With long-term plans to add more games, it’s a machine that could last for years to come.

Yes, but with some caveats. It’s a pricey machine that’s just starting to build its game selection. It’s a no-brainer for enthusiasts, but the more casual player might want to keep an eye on what games get added in the next few months before fully committing.