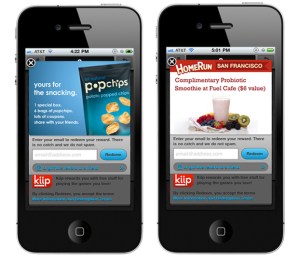 Mobile advertising start-up Kiip is attempting to change mobile advertising for games with a new type of ad: Offer users real-life incentives for accomplishing in-game tasks. According to TechCrunch, the new advertising model would do away with pop-ups and banner ads that have long polluted the valuable screen space on our mobile devices.

The new breed of advertisers at Kiip believe the traditional type of ads deployed by networks like Apple’s iAd and Google AdMob are insufficient for our next-generation devices. Instead, Kiip is attempting to create a new kind of ad network that taps into the real reason people play games in the first place: achievements.

Kiip (pronounced like ‘keep’) has partnered with a wide range of brands, like Sephora, Vitamin Water, Dr. Pepper and Carl’s Jr., to offer free stuff in real-life for in-game success. So if, for example, you rack-up a string of three-star scores in Angry Birds, you might get a free milkshake, a 6-pack of soda or a sample mascara.

“Achievements are the universal currency for accomplishment and every game in the world has achievements,” 19-year-old Kiip co-founder and CEO Brian Wong tells TechCrunch. “The achievement itself isn’t the cool thing, it’s the moment. We realized that the moment was worth something. The natural evolution is to put something there that actually matches the achievement.”

Co-founded by former Digg.com employees Brian Wong and Courtney Guertin, and Sequence’s Amadeus Demarzi, Kiip is apparently based on the manipulative idea that the best time to coerce someone into liking a brand is when that person is happy (i.e. when they just raked-in a high score).”People have been too focused on real estate and pieces of the screen being part of the advertising equation,” says Wong, “but they’ve completely overlooked the notion of moments, moments where you’re happy, moments when you engage. These moments are worth something.”