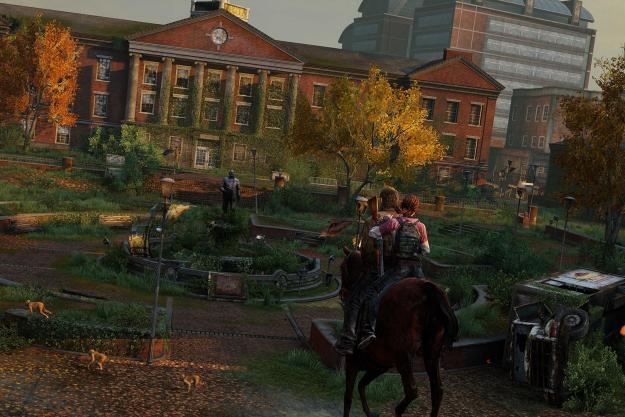 The Last of Us Remastered
Score Details

“The Last of Us Remastered is the same great game it was in 2013, but Naughty Dog’s upgrade could have used more time to bake.”

You’ve killed someone, so you’re the villain. Though he was trying to kill the young girl you promised to protect, so you’re really the hero. Except he was only defending himself from a perceived threat while he was out scavenging for a few morsels of food to feed his family with. So, what the hell are you now?

The Last of Us is a game about committing horrible crimes in the name of a noble cause. It’s a journey of self-preservation at any cost. Of the two main characters, Joel and Ellie, there’s only one true protagonist. How Joel’s actions read by the time the credits roll is wide open to interpretation – that’s the genius of this story, really – but he is not what many would call a “good” man. He’s simply a survivor.

The Last of Us is a game about committing horrible crimes in the name of a noble cause.

The story follows Joel as he takes on the job of escorting Ellie to a secret medical laboratory. It all plays out against the backdrop of a post-apocalyptic world that’s been overrun by the flesh-eating, zombie-like “Infected.” Ellie is a special girl, and the thing that makes her special may prove to be the key to saving humankind.

At its heart, The Last of Us is a stealth-focused action game that puts a premium on resource management. There are a handful of simple environmental puzzles to be solved, but much of the play time is spent sneaking around groups of enemies, either to dispatch them quietly, one at a time, or to circumvent them completely. None of that changes in The Last of Us Remastered, which brings Naughty Dog’s 2013 masterpiece to PlayStation 4.

The most noticeable change in Remastered is, not surprisingly, the visual upgrade. The Last of Us looked great on PlayStation 3, but the level of newfound fidelity in the game’s textures and visual effects is immediately noticeable on PS4. The facial animations don’t always measure up, as the new textures are simply “painted” on top of existing character models, but the visual boost in The Last of Us Remastered is significant.

The re-release also takes advantage of the PS4’s DualShock 4 controller in a variety of ways. Aiming and shooting are now automatically mapped to the L2/R2 buttons, to take better advantage of the newer controller’s trigger-style grips. The DualShock 4’s built-in speaker is also put to occasional use, for flashlight sound effects and audio from collectible voice recorders.

Then, there’s a whole host of additional content: the full, multiplayer Factions mode, complete with its two, previously released downloadable content packs; the story-driven Left Behind add-on; optional commentary tracks on the in-game cinematics; and, compliments of a day-one update, the same Photo Mode that proved to be so popular in Infamous: Second Son.

What’s unfortunately not improved on is the quality of the play in The Last of Us. Naughty Dog crafted a tremendous story and built very satisfying gameplay to complement it, but it’s not enough to sustain the roughly 15-hour completion time. It’s a credit to the writing that you want to keep on pushing through, but the slow pace and demanding stealth-driven action start feeling repetitive far too quickly.

For all the improvements, The Last of Us Remastered is not quite as spruced up as it could have been.

Sharper AI might have helped in this remastered PS4 release, but all of Naughty Dog’s development efforts appear to have gone into improving the presentation. Even at higher difficulties, enemies flip wildly between stone dumb and preternaturally aware of their surroundings. You might load your last checkpoint to find a swarm of baddies zeroing in on your position… or you might see them simply frozen in place.

Some of these issues appear to stem from basic performance issues, things that could be addressed in a patch. Seeing Joel suddenly start running at a 45-degree angle to the ground is jarring, sure, but it’s an obvious glitch. Other problems are more likely the product of a self-empowered AI occasionally going rogue. Enemies move freely through The Last of Us’ huge environments, and sometimes their signals cross. That’s where it would have been nice to see some improvements.

At its best moments, enemies in The Last of Us behave intelligently-yet-convincingly; they’ll work in groups and fan out to take flanking positions, but they can also be fooled if you slip away unseen. But at worst, they’re an unpredictable mess, either making a beeline for Joel’s seemingly safe, out-of-the-way hiding spot or getting caught in comical AI loops that cause them to run around in circles or repeatedly teabag the ground beneath their feet.

Those aren’t the only breaks in the game’s illusion. Joel is joined for most of his adventure by one or more companions. Naughty Dog worked to ensure that The Last of Us didn’t turn into a giant escort mission, but the big cheat for accomplishing that appears to have been making all allies invisible to enemies until Joel is actually spotted. More than once, you’ll see Ellie run directly into a patrolling baddie, only to be ignored.

These are frustrating breaks that capably illustrate where the boundaries lie for this “remaster.” Naughty Dog’s grand post-apocalyptic road trip looks better than it ever has before, but the code beneath the visuals is as creaky as any late-era console release that strains the limits of its home machine’s processing power.

For all the improvements, The Last of Us Remastered is not quite as spruced up as it could have been. The gameplay falters more frequently than it should around frustrating technical hiccups that are all the more glaring alongside Naughty Dog’s bountiful upgrades to the presentation. We can forgive what must have been a truncated development schedule for this port, but we still have to point out the shortcomings where we see them.

Let’s be clear though: The Last of Us won scores of “Game of the Year” awards in 2013 for good reason. It’s got a believably drawn cast of complex characters and one of the sharpest narratives in all of video games. Joel and Ellie’s journey is an experience that no one should miss, and The Last of Us Remastered is the version to get if you’ve got the hardware for it.

Topics
Warzone 2.0 Season 2: release date, features, and Resurgence mode
The best upcoming Nintendo Switch games: 2023 and beyond
The best upcoming PS5 games: 2023 and beyond
Every video game delay that has happened in 2023 so far
The best Fire Emblem games, ranked from best to worst
Xbox just surprise announced and released a stylish new Game Pass title
The Elder Scrolls Online’s 2023 updates bring players back to Morrowind
How to cheat in Words With Friends
Shoulders of Giants brings mascot-era nostalgia to the roguelite genre
The best PSVR games for 2023
Like a Dragon: Ishin’s Trooper Cards are full of cameos, including Rahul Kohli
How to romance characters in Fire Emblem Engage
How to eliminate enemies with no ranged weapons in Fortnite