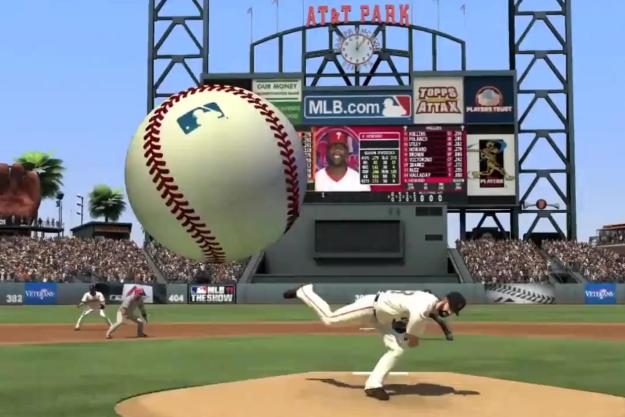 I should start out by saying that I am not a “baseball guy”. I played as a kid, used to watch games all the time, and I’ve played more than my fair share of baseball video games, but I have never been into the minutia of the stat tracking, and with the exception of the playoffs I don’t really follow the sport. Perhaps it has something to do with growing up as a beleaguered fan of the Kansas City Royals. But after playing MLB 11 The Show, I might actually start following the game again .

The trick with annual franchises is to find a new angle each and every year in order to justify the price their own existences. Sometimes it works, sometimes it doesn’t. The biggest issue with MLB 11 The Show is simply that last year’s title was so good that it was at the time the best baseball game on the market. The new version is better, in some ways much better, and yet it is still more of the same. But if you don’t own MLB 10 The Show, or if you don’t mind buying annual editions, and if you have any interest in a baseball video game at all, and you own a PS3, then you won’t go wrong with MLB 11 The Show, one of the best sports game. Period.

Every edition of an annual game can be ruined by a lack of improvements, but it is highlighted by the new additions. It is taken for granted that the new games will look better, and probably have more jerseys and parks and things like that, but the new features are what goes on the back of the cover in big bold letters. Sometimes the new additions are fairly minor but the title makes it appear like they are game changing twists that will change the way you view life. Food will test better, air will seem sweeter, and your new turbo button, or practice mode, or maybe a slapped on online option, will change the way you play games forever! Of course these features rarely change the actual way you play the game, and usually they are lifted from other franchises or other sports to begin with. Not pointing any fingers Madden, but it happens. The changes in MLB 11 The Show don’t immediately seem all that major, but once you get into it and understand what SCE San Diego did, you will see that in a few ways, they have created a new way to play a baseball video game.

The biggest addition is the inclusion of what the game calls “pure analog”. To put it simply, you can now use the analog sticks to control your offensive and defensive players. That might not sound like a big deal, but it is, especially when it comes to the pitching. Swinging with an analog isn’t that big of a deal, you just pull back and push forward to swing. It adds a new twist, but it isn’t all that much different than just hitting the button at the right time. As a fielder you can modulate your throws to the bases, and the stronger you hold the direction of the throw, the stronger (and possibly wilder) the throw will be. It is an interesting feature, but can be finicky. But it is pitching where this new system shines.

Pitching with the analog stick forces you to think about every movement from the pitcher, and it allows you to put the ball exactly where you want. You still have the option of pitching with the buttons, which is still fun, but the analog pitching mechanism is a different way to pitch, and one that could become a standard edition to all baseball games, not just The Show.

Two player co-op also joins The Show, both online and off. Playing sports games co-op is always a difficult proposition, simply by its nature. You need to be able to react quickly and switch between multiple characters, which can become chaotic with multiple people all trying to control the action. The only times it really works perfectly is doubles only events, and even though The Show does co-op as well as any baseball game can, it is still limited by its nature.

With the online side comes the “Challenge of the Week”, which fans can compete in to win real-life prizes. Each player is given three outs to score as many points as possible through hits. The more hits you get in a row, the more multipliers to help your score. The challenge will feature a new star to bat wit, and a new famous pitcher to face off with each week, and the prizes range from a 46″ 3DTV to a trip to the 2011 All-Star Game. Once your weekly shot is done, you can purchase additional chances for $0.25 a pop.

If you own a Move, the Homerun Derby is a natural fit for the controller. Hitting in general can be fun no matter what with the Move, but it can be a bit awkward to have to steal and control players after the hit with the controller–but Homerun Derby is made for the Move. It isn’t a selling point per se, and playing an entire game with it could become more trouble than its worth, but it is a fun addition.

The Old Made New

Many of the features from the previous versions of The Show are back, of course, and they have seen a few minor improvements that make a huge difference. One of the biggest features in the game is the “Road to the Show”, a create-a-player section where you train your avatar and work their stats up until they reach the draft. In the past, you followed a series of commands that you either succeeded in or failed. The new version is much more robust, and makes the training into something that is actually fun.

When you are failing in a particular section, the game will recommend the correct and appropriate training to help you up those stats. The better you do, the more training points you earn. It works out well, and turns the “Road to the Show” into something of an RPG of sorts.

Then there are the graphics, which were always among the best in the world of sports games. The facial modeling is very good, and in most cases you can tell who the player is just from the face. This isn’t always the case and sometimes the players look like the faces in nightmares, but it succeeds more often than you would expect and odds are even the most hardened of baseball video game fan will be impressed. The lighting effects are also noticeably better, which is saying something. The parks also look great, and the sound is nearly perfect in most places. Even Kauffman Stadium, where my beloved Royals play and also the source of a great deal of pain over the years, can be a loud and exciting place that looks great. Although it may actually be louder in the game. When you a play a game late in the season where the pressure is on, or a playoff game, the crowd comes to life. You can almost feel the energy in the stadium, and the crowd feels alive. Basically, it simply feels real.

But the graphics are just the frosting, it is the character animation that is really important in sports games, and The Show nails it. Each movement looks natural and real, from the outfielder sliding for the catch to the batter being brushed back. It really is fairly amazing, and again, it just looks real.

A Foul Ball Now and then

There are a few points that fail though, and perhaps they only stand out because the rest of the game is amazing. The announcers—Eric Karros, Matt Vasgersian and Dave Campbell—all do good jobs and have an impressive selection of dialogue, but sometimes they will each comment on the same play and say almost the exact same thing. That might sound normal enough, but it is weird to hear one commenter say something like “he just missed outside”, and then immediately hear another say “close, but he missed it outside”.

Another minor quibble comes when a batter is waiting on a pitch, or immediately after the pitch. The batter does the exact same movement over and over. It becomes nearly hypnotic, and it breaks the illusion for a moment. Again though, I fully admit I am nitpicking.

The biggest flaw with the game is again a minor one, but controlling runners on base while you are batting is frustrating at times, and can because it is a major part of the game, it quickly become a distraction. It is all stuff you can get used to, but it doesn’t feel natural at first. There is also a steep learning curve, especially when it comes to batting–or more specifically watching where pitches hit–but that is to be expected of nay baseball game.

MLB 11 The Show is simply the king of baseball video games. It looks and moves so well that you could almost believe that you were watching a real game. Fans will lean over the railing for foul balls, and the players that slide will retain dirt on their uniform throughout the game–it is the details that really help.

The real selling point to convince people that already have baseball games and are looking for an excuse to upgrade, is the pitching system thanks to the analog. It makes pitching feel original and fun, and recreates the mechanism. The “Road to the Show” is also greatly improved, and both offer plenty for anyone looking for a new game to check out.

If you are a baseball and/or a video game sports fan, MLB 11 The Show is worth your time. I found myself really following the stats of the players and learning the lineups of several teams, and after a few playthroughs, I found myself yearning for the noralgic grass of a real stadium under a summer sun. But since I can’t have that for a while yet, I’m fine with settling for MLB 11 The Show in the meantime.