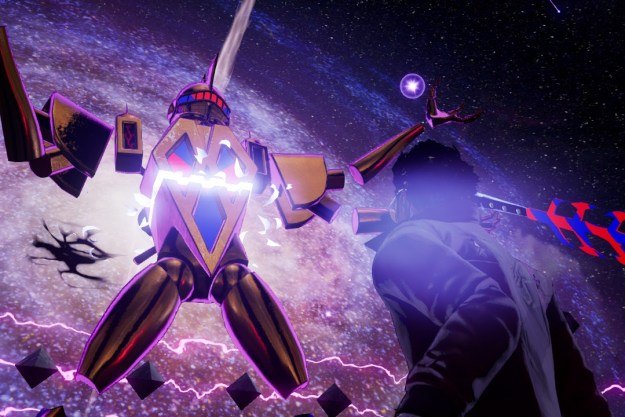 “No More Heroes 3 is a gem for the Nintendo Switch that no action fan should lack in their collection.”

Goichi “SUDA51” Suda is one of the most unique and creative video game designers, directors, and writers out there. His most recognizable work includes Killer7, The Silver Case, Fire Pro Wrestling, and the No More Heroes series. His latest game, No More Heroes 3, is yet another home run from Suda that showcases his knack for delivering a thought-provoking, high-octane adventure.

No More Heroes 3 is an action-packed good time with strong writing and tons of fan service as the cherry on top. Fans of No More Heroes, Suda51, and hack-and-slashes would be doing themselves a disservice to miss out on this great Nintendo Switch game.

Check out our No More Heroes 3 beginners guide if you’re just getting started.

The game begins in classic No More Heroesfashion, with Travis immediately being thrown into a new war and a chance to climb the killer rankings. This time, his enemies aren’t killers from Earth, but aliens from different planets gathered by the extraterrestrial prince and self-proclaimed “Goddamn Superhero” FU.

You find out that FU was once a small, adorable creature that created a bond with a human boy, Damon, who Travis Strikes Again players may immediately recognize. Upon his return to Earth to meet his friend again, he’s not only sporting a new humanoid look but his own private army of alien fighters and a new goal of conquering the planet. Too bad he wasn’t counting on a badass otaku assassin to have the power to take them all down, one by one.

As in past No More Heroes entries, Travis must confront these fighters while rising up the killer rankings and encountering a few surprises along the way. Of course, it isn’t as cut and dried as it may seem; Suda’s writing makes the adventure a lot more unique than the gameplay premise seemingly allows.

As a fan of the series, I found myself feelinga wide range of emotions — from gleeful joy to sadness — when moving through the story. We witness Travis going through more than he ever has in the past and, for the first time, see him accept the fact that he is the hero of a world with (wait for it) no more heroes. Players are really going to want to play through Travis Strikes Again to get the full effect of this character growth. It makes the story of this game even more powerful.

Travis isn’t the only character getting the spotlight in No More Heroes 3. Sudaverse characters aplenty appear throughout the game, with tons of surprising faces showing up left and right. Each of these characters offer something new, and I couldn’t get enough of any of them. It really feels like a wonderland for fans of each of Suda’s past games. And yes, that includes games like Fire Pro Wrestling.

The action levels up

No More Heroes isn’t just defined by its writing; the action here really takes the series to the next level. The hack-and-slash battles are a mix of the classic combat from the numbered titles on the Wii and the series’ Switch spinoff. Ripped right from Travis Strikes Again, Travis can now perform light and heavy attacks instead of only having access to one beam katana button and punch/kick melee attacks. This already gives players a wider variety of battle possibilities than in past titles, but there’s a lot more in store.

Holding forward, back, or neutral on the control stick lets players do different attack strings with their corresponding light and heavy attack buttons. For the first time in a numbered entry, Travis can also jump. That gives players access to a forward-moving air-light slash and an air-heavy attack that drops Travis like a rock.

Offense isn’t everything in this game; players can block and dodge roll their way around the opposition. The Dark Step mechanic, which acts as a parry, returns with a new twist as well. If Travis dodges right before an enemy hits him, he’ll immediately move behind them and become invincible to any attacks for a short amount of time. He can either unleash a barrage of beam katana attacks or grapple with foes, immediately recharging his katana (you can also shake the Joy-Con while walking to recharge it for the first time in the series).

If that wasn’t enough, there are theDeath Glove attacks, which return from Travis Strikes Again. Players start off with a damaging “Death Kick,” which can put some major distance between them and their foe. As players progress, they’ll unlock more Death attacks, including “Death Force,” which is a force push that pushes enemies farther away, damaging anyone they come in contact with. There’s also “Death Slow,” a field that slows down anyone in contact with it, and “Death Shower,” another field that showers anyone in radius with damaging one-bit pellets.

Though the combat may be clunky at first to anyone unfamiliar with No More Heroes, I found it to be the best implemented in the series. Players can get creative and use their Death Glove attacks to tackle challenging foes in unique ways that fit their playing style.

Want to play super-lame and keep your foes away? Use Death Kick or Death Force to push them away and attack when you like. Want to rack up the damage and quickly get rid of an annoying enemy? Knock them down, use Death Slow and Death Shower in conjunction with your heavy attacks to end them faster than ever. The possibilities are endless, making for a game that never stops being fun, even in subsequent playthroughs.

Trust me, I played three times before writing this review.

What’s all the hubbub?

After fans called for its return in every game since No More Heroes, Suda has finally delivered by restoring the GTA-esque hub world that everyone remembers about the original. Players ride their totally-not-Kaneda-from-Akira‘s motorcycle throughout Santa Destroy and neighboring cities to advance through the game, finish collecting missions, and earn money through odd jobs.

Though some of these areas can be a bit bare, it seems like an intentional design choice — especially in the “Call of Battle” area, which is a cheeky joke on the Call of Duty series. Even then, I enjoyed traveling through these areas to look for kittens, trading cards, new T-shirts, sushi stands, and toilets to plunge. Yes, all of the side-quest goodness returns from No More Heroes 1 and 2. But for the first time, these missions aren’t needed to earn progression money.

No More Heroes 3 allows players to progress however they want once they finish three prerequisite battles to earn their chance to fight the next alien boss. Players can completely ignore the more mundane odd jobs like mowing the lawn and shooting kaiju alligators for the usual fighting missions. Or they can run around and collect scorpions for the sushi guy.

As they have in the past, these missions can come across as a bit intrusive and repetitive. With the battle missions, you’re locked in an area with a set of enemies that you have to defeat, with the only difference between them being the enemies and locations. This goes double for the shooter missions that task you with defeating a giant alien boss.

However, if you enjoy the combat and shooter sections (like I did), you’ll find these sections to simply be another chance to test your skill against new foes.

No More Heroes 3 is one of the best action games of the year and offers some well-rounded fun. The writing, gameplay, performance, music, and virtually everything else come together to deliver a must-play game for the Nintendo Switch, just as the original did back in 2007 on the Nintendo Wii. Fans of Suda51, No More Heroes, action games, and a hilariously good time need to give this one a try. If you weren’t a fan of developer Grasshopper Manufacture and Suda before, you will be after this one.

My first playthrough on normal/mild difficulty lasted around 11 hours, but that was without me going after all the unlockables and sidequests. When I went back to tackle the spicy/hard setting on new game+ and went for 100% completion, I hit around the 17-hour mark.

There is no shortage of good hack-and-slash and character action games in the world, but No More Heroes is very unique. There is no title quite like it both in the writing and action department. The only alternatives out there would be past No More Heroes entries, which I recommend playing through before trying your hand at No More Heroes 3.

Yes. If you want a unique action experience like nothing you’ve ever played through, I highly recommend No More Heroes 3. The combat can be a bit wonky at times and its progression methods aren’t for everyone, but the game offers an experience Switch owners shouldn’t miss out on.

Topics
Every video game delay that has happened in 2023 so far
The best PSVR games for 2023
The Elder Scrolls Online’s 2023 updates bring players back to Morrowind
The best Fire Emblem games, ranked from best to worst
How to connect an Xbox controller to a PC
GTA 5 cheat codes and secrets for PS4, PS5, Xbox, and PC
WWE 2K23: release date, editions, pre-order, and more
Despite divisive dialogue, Forspoken gets a lot right about open-world games
The best RPGs for the Nintendo Switch
How to link your Fire Emblem Engage and Fire Emblem Heroes account
Xbox and Bethesda’s Developer_Direct: how to watch and what to expect
Goldeneye 007 comes to Game Pass and Nintendo Switch later this week
The best iPhone games in 2023: 31 games you need to play right now