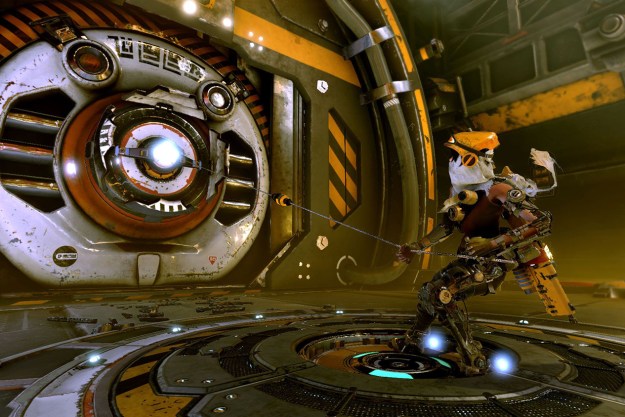 “'ReCore' is a game you’ll want to love -- which only make its flaws that much more disappointing.”

There was a time when ReCore looked like it could be a great game. The new action-platformer from Mega Man creator Keiji Inafune’s studio Comcept, and Armature, a developer led by former members of the Metroid Prime team, has an interesting and appealing idea in its heart. It’s throwback to Nintendo 64-era platformers, revolving around precise platforms and interchangeable AI-controlled robot companions, each of whom add unique, distinctive abilities to the mix.

There is enough good in ReCore to recognize its intentions, and even how they might have come to life under other circumstances. But the game itself — the levels we get to play, and the action we get to experience — is stunted. The game is littered with unresolved narrative hooks and mechanical concepts that never turn into meaningful gameplay.

As a result, ReCore simultaneously feels short, but also drawn out. You’re consistently waiting for the game to put its pieces together, right until the moment you realize it’s about to end.

In ReCore, players control Joule Adams, part of a crew sent to terraform a desert planet called Far Eden to make a new home for the human race. In the game’s universe, humanity has evacuated Earth to escape an uncontrollable plague called Dust Devil, which seems to be systematically killing off society. Joule wakes up after nearly 200 years in suspended animation to find that she has arrived on Far Eden, but things have not gone as planned. The other members of the terraforming team aren’t around, and the army of robotic workers sent to help them seems to have gone rogue.

Most of them, anyways. When Joule wakes up, she’s greeted by an unexpected friend, a dog-like bot named Mack. Eventually, Joule finds two more robot friends, a spider-bot called Seth and an ape-esque bot named Duncan. Together, the group must figure out what happened to humanity and restart the terraforming effort. To do this, Joule must collect Prismatic Cores, shiny spheres that can fix Far Eden’s heavy machinery.

On a structural level, ReCore clearly takes its cues from 3D action-platforming classics like Super Mario 64. Similar to the stars of Super Mario 64 or the “Jiggys” of Banjo-Kazooie, Joule scours the deserts of Far Eden tracking down enough Prismatic Cores to unlock new sections of the world, and optional dungeons. Until very late in the game, you’ll earn most of the cores you’ll need simply by playing through story missions, though the game lets you deviate from that path early on.

There is enough good in ReCore to recognize its intentions… but the game is stunted.

The gameplay is a mix of third-person combat and extended platforming sequences. Joule can double-jump and dash in mid-air from the word go, and the game immediately leans on those skills hard. Holding down the dash button to eke as much distance out of a long jump is a familiar, but tangible thrill that the game successfully leverages over and over.

The game’s platforming sequences require precision and planning. While sticking the landing can be finicky at times, the feeling of successfully making it through tough runs generally outweighs the sting of even a few failed attempts.

When the fighting starts, Joule whips out an assault rifle with multiple color-coated affinities. The gun does more damage when your gun’s color matches the enemy’s core. She also gets a hand from her AI-controlled robot friends. Alternating between two of the three at any given time, each friendly core is a different color, lending its own combat affinity, and every robot has its own standard and signature “lethal” attack.

Joule’s enemies, all robots, can also be defeated by having their core removed. When an enemy is weak enough, a prompt appears signaling that you can forcibly remove their core, which triggers a tug-of-war mini-game that can be stopped if both sides pull too hard, or Joule is hit by another attack. Winning the game destroys the enemy, and gives Joule the core, which she can use to upgrade Mack, Seth, and Duncan’s stats.

While the color-matching system with the cores does require you to actively pay attention to what you’re shooting, the combat very quickly grinds down to monotony. Sure, you can upgrade Mack, Seth and Duncan’s specs using cores and spare parts found dropped by enemies. But Joule’s personal arsenal never expands beyond a single weapon. The gun has a standard and charge shot, but most fights ultimately devolve into battles of attrition.

Good ideas, but over before you know it

While it all serves as a novel means of inciting nostalgia, the systems are not used to great effect. In the past, games would tie their progression to collecting an item, like ReCore’s Prismatic Cores, to create a sliding difficulty scale within the game itself, which would start at a beginner’s level and rise to a difficulty higher than the game’s hardest mandatory content. But aside from a tough dungeon unlocked by finding every core in the game, ReCore plateaus early on. Most of the game’s side-missions are, at most, moderately difficult for intermediate-level players.

ReCore feels quite short as a result. The core campaign comprises only a few large missions, separated by destination-based objectives in the game’s overworld. Though the game can take more than a dozen hours to complete, much of that time is spent in the game’s side missions, which seem almost entirely optional until a late-game dungeon asks for a much higher number of cores.

The side missions, while fun and well-constructed on an individual basis, are merely timed platforming sequences or wave-based combat arenas, loaded with identical sub-objectives, such as finding a hidden key. Since most of Joule’s skill-set is available from the moment the game begins, these missions feel limited and repetitive, as they aren’t able to incorporate new tricks in response to a wider set of tools.

If you look for them, there are signs the developers had bigger plans. Artifacts from game mechanics largely stripped from the game are still in place, often because they’re woven into the game’s DNA.

For example, you can swap Joule’s three AI companions into different frames. Based on some dialogue, the different cores should have affinities for different frames. However, there are only four frames in total, and no clear system for assessing what cores match with what frames. It seems obvious that the original vision for ReCore featured a larger number of frames, providing enough options to make the frame-cores combination a serious consideration.

While fascinating, these loose ends do more harm than good. With only four frames and the ability to swap between two characters in the field, players have to frequently return to Joule’s crawler — a home base where she can upgrade her robots and fast travel — to swap cores and companions. This annoyance is compounded by the game’s substantial load times.

There’s still a lot left to see in 2016, but ReCore is an early contender for the most disappointing game of the year. To see such a good idea squandered, seemingly lost to a lack of time and resources, feels heart-wrenching. Even with Microsoft dropping the price to $40 as a pre-emptive mea culpa, ReCore falls far short of the game its creators intended.

Topics
The best upcoming PS5 games: 2023 and beyond
Every video game delay that has happened in 2023 so far
The best capture cards for 2023: Xbox, PlayStation, and PC
The best PSVR games for 2023
How to link your Fire Emblem Engage and Fire Emblem Heroes account
Xbox and Bethesda’s Developer_Direct: how to watch and what to expect
Goldeneye 007 comes to Game Pass and Nintendo Switch later this week
The best iPhone games in 2023: 31 games you need to play right now
I can’t believe I’m recommending Forspoken on PS5 over PC
Redfall’s May 2 release date revealed during Developer_Direct
The best Fire Emblem games, ranked from best to worst
Xbox just surprise announced and released a stylish new Game Pass title
The Elder Scrolls Online’s 2023 updates bring players back to Morrowind