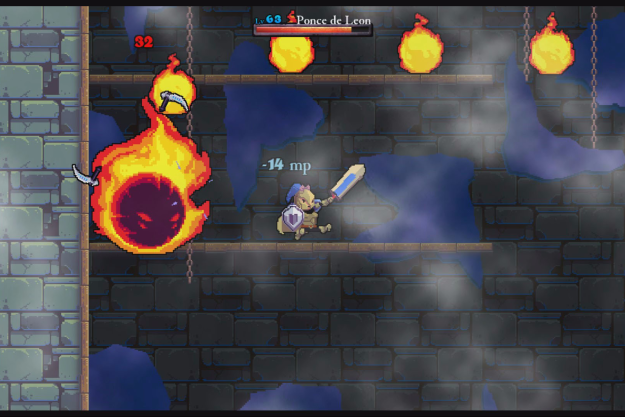 “Rogue Legacy hooks you immediately with speedy action, and keeps you hooked with deep character building and exploration.”

Two ways in which the addictive power of a drug is measured: how quickly the high goes into effect and how difficult it is for the user to stop using. The buzz of coffee, the spins of a cigarette, and the heady boldness of beer take instant effect; the very moment you’ve had a taste, you want more. Cellar Door Games’ Rogue Legacy works on the same principle: it hooks you immediately with immaculately designed, speedy action, and keeps you hooked with an evolving cycle of character building and exploration with almost no barrier to entry.

The premise is elegantly simple: the magical Castle Hamson has enraptured a knight. He sets out to conquer it and claim its many riches, guarded by the castle’s demonic master, his four gatekeepers, and their legions of monsters. The knight is bold, but weak and inexperienced, so he beefs it almost immediately at the beginning, killed by whatever no-name monster breathes on his skin.

In other games, it might be frustrating to die almost immediately. “I didn’t even get past the first few hallways,” the game’s progenitor knight surely thinks. “Not even Castlevania kills you that quickly! Come on!”

It takes just seconds between dying and selecting one of three randomly generated sons or daughters of the knight who was just felled – who start with any previously unlocked skills, gear, stats, and gold – to get back to the action. Pick a new one and head back to the castle, which will be completely redesigned and rebuilt at random when you head back to the door.

The instant pleasure of this cycle – explore, die, build, repeat – is Rogue Legacy‘s succulent, barbed hook. Since the castle itself is relatively small no matter how it’s built, you’re always able to make some kind of progress even if you die immediately.

Start out once as the durable Barbarian or the hard-hitting Knave classes available at the beginning, bounce in, and you can collect some gold before (quicky) dying. Legacy keeps even that brief stint satiating with its character building. An expanding tree of skills is open between each death, where you buy everything from health and defense upgrades to entirely new classes for your offspring to take on.

The enemies you encounter are so hard that, more often than not, you only have enough gold to purchase a few skills or unlock new armor or runes from the blacksmith and enchantress that operate outside the castle gates. Whatever gold you have left goes back to the devil himself, who’s waiting at the door to charge you to get back in. It’s the toll you pay to seek your doom once more.

The high of the cycle is maintained by the smooth quality of the action. Rogue Legacy plays mighty fast, with all its characters moving at greasy but precise speed. The little knight holds his/her giant sword out at an angle in front, running full tilt, and jumping as much as half the screen high at the tap of a button. Enemies too are swift, and fights are rarely drawn out. Either you or they are going down in a few hits, and health refills found in destructible objects like statues are scarce, so conflict is sweetly swift.

Remarkably, the castle itself makes this action so palatable, despite it being randomly generated every time you enter it anew. Even though it recycles some rooms – the same enemy layouts, platforms, or trap patterns appear if not in the same place – there are so many of them that it never wants for variety, and it’s designed smartly enough to never seem dull or cheap.

The same can be said of enemy variety. While the castle is split into four areas of increasing difficulty – the second tier forest is always in the east, third tier tower is north, and devilish dark world is south – the enemies in each are mostly stronger variations on what you’ve already encountered, with one or two nasty newbies thrown in.

Familiar as they are, Rogue Legacy always finds ways to mix and match them in surprising ways. One trip in, you’ll wade back through the central area, fearlessly collecting treasure and new gear designs, dying on purpose to get out and buy some kit for a run at one of the four bosses. Then you’ll go back in, and the third room will be a corridor of mad spike pits with a special treasure chest you can only open if you don’t take damage. Or it’s a chest guarded by two mammoth, poison-spewing plants that shouldn’t appear until the forest. Or something equally crazy you haven’t seen in the 10 hours you’ve already played.

Rogue Legacy is never anything less than totally accessible and totally challenging, its viciousness tempered by a great sense of humor. A perfect example is the random traits of your progeny. Some are giant (Gigantism), some super small (Dwarfism), some have light feet and won’t trigger traps (Peripheral Arterial Disease), and some are clumsy so they break things just by touching them (Clumsy). Some just have irritable bowel syndrome and are constantly farting.

These varying traits also accommodate a variety of play styles. If you’re extra dexterous, it feels nice to use an archmage so you can focus on dodging and casting spells like a ring of fire. If you just want to focus on farming new skills, the miner picks up extra gold; it feels nice to just go in and build. The characters are one more link in the cast iron chain tying you to the game’s revolving door.

One drawback, depending on the player, is that Rogue Legacy leaves out a lot of pertinent information. Special items, like Hermes’ Shoes and other relics obtained from randomly appearing prayer statues, have no description, leaving you to wonder what they do (or seek out answers on the Internet). Certain character attributes are vaguely described with a joke, rather than a hint as to how they’re explicitly useful.

Players that love experimentation will be delighted by the surprises, and the game’s speed certainly accommodates that playful spirit, but it may frustrate those that want to keep the feeling of progress strong, a feeling that becomes harder and harder to maintain as the game goes on.

Like any drug, though, Rogue Legacy suffers once you’ve built up a tolerance to its pleasures. Progress is almost always a guarantee when you take a swing at the castle, but that progress slows demonstrably once you’ve unlocked 80 or so skill levels. Eventually new armor and sword schematics stop appearing in low-level areas, forcing you to plumb into more challenging rooms, but stronger enemies mean quicker deaths.

With so many stat unlocks costing thousands of gold at that point and gear so rare, progress grinds to a trickle. It’s still fun to run into the castle and whack things, but what progress you make starts to feel illusory. The game knows it too; randomly appearing journal entries left by your ancestor wonder about the castle’s very reality, and their own sanity. At that point, it’s daring you to go on. “Go ahead,” laughs Rogue Legacy. “Take another hit.”

The emerging grind doesn’t dilute Rogue Legacy‘s alchemical blend of action and character crafting enough to damn it, though. From its sharp cartoon art to its goofy, UHF-quoting humor, Cellar Door’s game is the work of craftspeople. It’s all the more impressive for a game with so many randomized elements, which would leave a lesser effort feeling indistinct.

While its 2D presentation might make it seem like a throwback, it’s also smartly modern, with no barriers standing between the player and game. It starts fast, the controls are simple, and mastery is difficult but attainable and visible from the start.

Special note should be made of the PlayStation Vita version. Rogue Legacy was born on PC and feels equally suited to Sony’s home consoles, but its true home is on the Vita, where you can carry it anywhere for a quick session and optimal controls. Addictive as sin, Rogue Legacy is practically a perfect drug.

This game was reviewed on a PlayStation Vita using a code provided by Cellar Door Games.