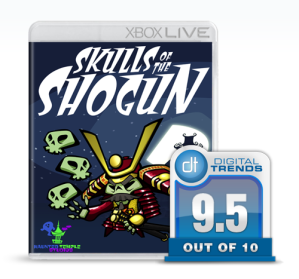 It can be said that Chess is a perfect game. It’s beautiful with its simple, but distinctive pieces on a black and white board, and it inspires beautiful thoughts through strategy, practice, and understanding of an opponent. There are an astronomical number of different possible chess matches—1.0516 X 10ˆ270993 different matches to be exact—and no human being can possibly play them all. Amazing as it is though, sometimes chess is exhausting. Sometimes you want the satisfaction of strategy but without the rigmarole of painful patience. Call it fast food for the brain. 17-Bit’s debut game Skulls of the Shogun will scratch that itch and then some. A perfectly executed slice of strategy gaming, Skulls of the Shogun is sweet relief for anyone exhausted by the strain of XCOM: Enemy Unknown, Fire Emblem, and similarly chess-like video games.

Skulls director, Jake Kazdal, wears his heart on his sleeve in Skulls of the Shogun. Unlike those aforementioned strategy games, Skulls hews closest to Nintendo’s Advance Wars series, especially with its lighthearted tone. Samurai general Akamoto is struck down in battle and sent to wait centuries in line for access to the afterlife. Being an irascible, pragmatic leader of men both living and dead, Akamoto decides that waiting is for suckers and moves to conquer the land of the dead, rallying deceased soldiers to his cause. This leads him into a war against the Shogun of the Dead and the Kurokawa, Akamoto’s former second in command and murderer.

Ignore the seemingly seriousness of the set up. In practice the story’s a charmer, with a cartoon look that’s part ‘60s pop art and part PlayStation-era role-playing game. The dialogue especially keeps Skulls light. The very first stage in the campaign includes references to Tombstone and Anchorman while characters introduced throughout – like the violence-loving god of thunder Raiden – make things funny.

The humor actually makes it easier to absorb how the game is played. At the start of each stage Akamoto is given a set number of soldiers to command: a selection of archers, cavalrymen, and foot soldiers. Each character type has strengths and weaknesses compared to others. Cavalry for instance can cover long distances over Skulls’ contained jungles, forests, and rice paddies, and they can take out archers without worrying about counter attacks. Cavalry are easily knocked back by foot soldiers though, making them vulnerable near thorn bushes or cliffs. Akamoto himself is a powerful force, but he also needs to be protected since the match is over if he gets knocked down.

Skulls slowly adds layers of complexity on top of this. Eating the skulls of downed enemies upgrades soldiers. Possessing shrines will let you summon healing or attack-spell wielding monks, or even more soldiers provided you’ve collected rice from the field. Every little action throughout Skulls has a perfect balance of risk and reward, and by the time the game reveals the full swath of possibilities for what you can do in a fight, it’s warmly taught you everything you need to know.

A perfect example from the middle of the game: Kurokawa’s up on a ridge with archers sniping your forces. There’s no way to reach him on foot, and using your own archers will only get them killed from counter attacks. Nearby is a shrine to summon a Salamander Monk, a just-introduced character that can summon a rampaging ogre into battle. The game doesn’t explicitly tell you to summon a monster up on Kurokawa’s ridge, it just makes a simple, quick scenario to use knowledge you just learned in the previous stage. Skulls is full of seamlessly designed moments like this.

Some might be worried about a lack of depth in the game. There are no persistent units or deep character management in Skulls of the Shogun, which makes perfect thematic sense. It’s the land of the dead! New soldiers are everywhere just waiting to join the cause, but no one’s looking to upgrade themselves beyond a little comfort during their eternal rest. It also makes Skulls far more approachable than a game like XCOM. Not having to worry about losing long-lasting soldiers due to a single crappy decision in Skulls makes the prospect of replaying a 30-minute level far more tolerable. Strategy games usually thrive on a sense of permanence. Skulls soars precisely because each fight is its own distinct scenario.

That also makes it easy to pick up and play against other people. Skulls’ multiplayer options let you play against friends on a single Xbox in your living room, or online against players on Windows 8, Windows Phone, and Surface tablets as well. Online players don’t even have to tackle each other at the same time. Make a move during your morning commute and your opponent can respond when they feel like it. I didn’t get to test the game on anything but an Xbox 360, but multiplayer on a couch is a succulent delight.

Like chess, like the very best games, Skulls of the Shogun just works. That it’s funny, pretty, and easy to learn is just a bonus.

There is nothing about 17-Bit’s game that’s going to change the world. There’s no revelation waiting inside its strategy, no piece of design that will transform the way we think about strategy games. It’s a simple idea executed just right, which is an impressive enough feat on its own. Skulls isn’t chess, but it doesn’t have to be.

Overwatch 2 is going free-to-play. Here’s why

Everything we know about The Outer Worlds 2